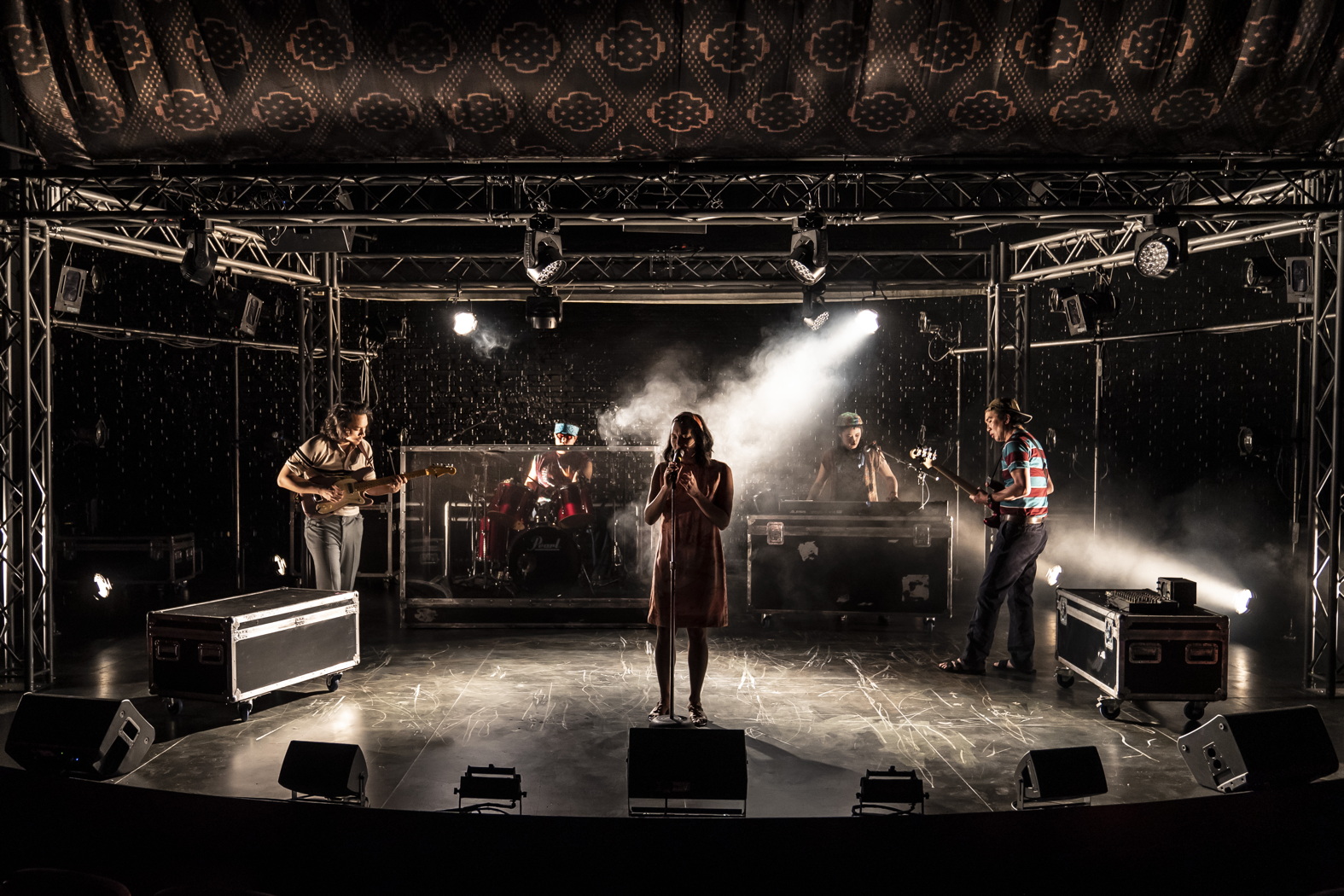 It isn’t often that you find a play that, while being thoroughly entertaining, also opens your eyes to something important that you never knew about before. Lauren Yee’s Cambodian Rock Band is one such play for me: an amazing pastiche of rock concert, history play, mystery, and family drama that resonates with our modern era, it plays out powerfully on the Victory Gardens Theater stage under the direction of Marti Lyons.

From the start, you know you are in for something unusual. On a black box set, five musicians take the stage and begin what appears to be a concert by a (yes) Cambodian rock band. But as the crowd is getting warmed up and settling in to enjoy the music, it is suddenly interrupted by a narrator who stops the music and humorously begins the story of the play. (He tells us he will play a part later, and he does, but he never stops playing the role of narrator.) Jovial and pleasant, he begins to guide us into a tale that takes place both in the early 2000s and in the late 1970s: the story of what the Khmer Rouge did to Cambodia under the leadership of Pol Pot.

I lived through the Pol Pot era. I saw The Killing Fields. But I was surprised to discover how little I actually knew about Cambodia, and I suspect this will be true for most of the people watching this play. We are taken to the very eve of the Khmer Rouge takeover of the country, watching a western-style rock band recording an album just before their entire world falls apart. We are taken deep into S-21, the secret prison in which thousands of “enemies of the state” were tortured into confessing and then executed. We meet the commander of that prison, a man who calls himself Comrade Duch (pronounced “doik”), played with great empathy by Rammel Chan. And we are brought into the early 2000s present of the play to meet a young Cambodian-American woman named Neary (Aja Wiltshire), her boyfriend Ted (Matthew C. Yee), and her father Chum (Greg Watanabe). (Yee also plays an old friend of Chum named Leng.) Chum has recently come back to Cambodia on a mission to bring his daughter back to America. Neary, who is working for an NGO dedicated to bringing Duch (one of the worst war criminals of the Khmer Rouge era) to justice, can’t understand this: she has dedicated herself to this cause mostly for her dad, who as a refugee had his entire country stolen by these people. But Chum has his own reasons to try to shut her down.

There are many issues involved in this play that make it relevant beyond its history lesson: immigration, race, genocide, human rights violations, the rights of refugees, how important it is not to be apathetic when a brutal regime seeks to take over your country, the destruction of freedom of expression, and other things. But most important of all of is the healing power of art. Every time the band starts to play, no matter what has been happening in the narrative, and even though, most of the time, they sing in Cambodian (the songs are from the rock group Dengue Fever, which specializes in Cambodian music), there is a palpable change in the emotion onstage and in the audience. This is echoed when a prisoner set for execution manages to get it stayed again and again simply by playing songs for Duch: the importance of art, which the Khmer Rouge tried to eradicate, cannot be understated, and Yee’s script keeps that right at the forefront.

There is not much of a set here (though Yu Shibagaki does some fun things with a couple of trunks), but the lighting (Keith Parham) and sound (Mikhail Fiskel) are spectacular. Fiskel creates the entire siege of Phnom Penh through sound effects, and Parham is lighting both a rock show and a play. Lyons’ direction is excellent; she gives as much attention to the concert sections as to the narrative ones, and the result is that we care about both the characters and the band. She pulls a great performance from the always-steady Watanabe, who here spends much of the play unable to state the reasons for his actions; his inner conflicts are portrayed with extraordinary compassion and tenderness. Matthew C. Yee gives another as Leng, who is put between a rock and a hard place. Chan and Wiltshire, too, representing the evil in the piece and the idealistic forces that seek to bring that evil to justice, are equally strong. In the end, though, it is the joyous expression of music that unites the ensemble and the audience. We’ve traveled a long way under their guidance, and in the end even Duch (who in the real world is spending life in prison) is allowed to rock out. It’s a powerful, cathartic experience, and one of the finest shows of the year.