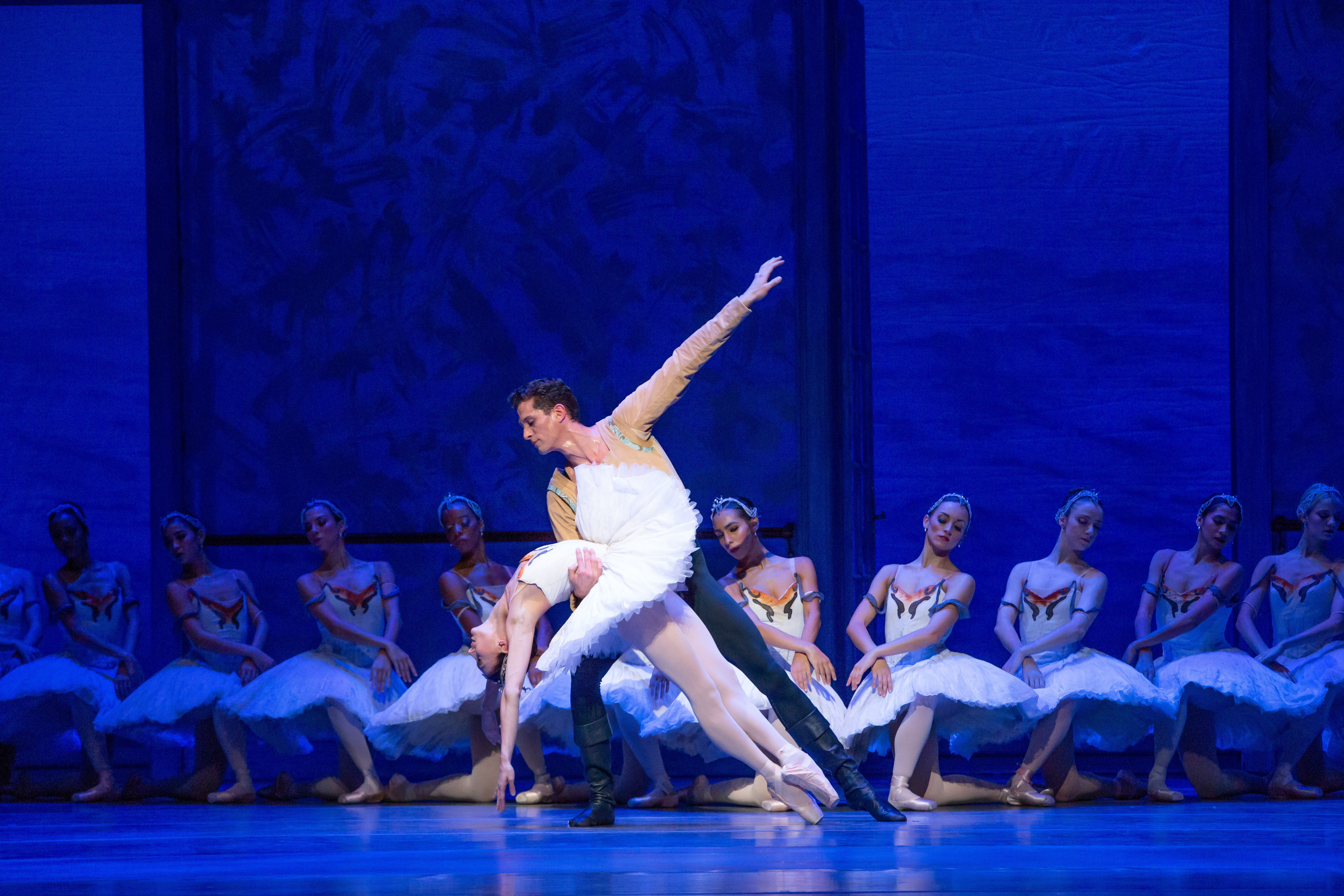 At a time when words in our cultural lexicon like “masterpiece," “brilliant," and “genius” have been used so often, and with such impunity, that they‘ve lost their meaning, what happens when a true “masterpiece” comes along? What do we say when we experience the work of an actual “genius”? How do we describe a truly “brilliant” artistic creation?

Let’s try this... Plain and simple. Christopher Wheeldon’s Swan Lake is a masterpiece.

Wheeldon’s take on the iconic ballet, endlessly re-envisioned since Tchaikovsky wrote the original score for the Bolshoi in 1877, is visually moving and symphonically stunning. The performances are executed flawlessly--with all of the requisite elegance, grace, and style--by a Joffrey Ballet Company that has fully realized the vision of Artistic Director Ashley Wheater, and now rivals any major ballet company in the world in terms of its technical mastery, artistry, and sheer beauty.

Victoria Jaiani’s is, by turns, captivatingly heartbreaking in her role as Odette the White Swan, and sensually compelling as the Black Swan, Odile. Dylan Gutierrez delivers a more than capable performance as Siegfried, with an impressive combination both emotional vulnerability and raw strength--evidenced by the multitude of stunning lifts he executes with Jaiani without a hint of fatigue. And Wheeldon’s take on the evil Von Rothbart--now cast as a filthy rich, super creepy Patron who may as well be ripped straight from the #MeToo headlines--is brilliantly imagined by Fabrice Calmels.

At the direction of Scott Speck, the Chicago Philharmonic’s rendition of Tchaikovsky’s score is super-charged, crisp, and loaded with the composer’s signature dramatic power. And with Adrianne Lobel’s set design--a simple yet perfect framing of a Degas’ Paris Studio--and Jean-Marc Puissant’s smartly updated costumes (gone are the days of the stiff tutus), all of the pieces for Wheeldon’s masterpiece are in place.

Taken as a three-hour artistic experience, the Joffrey Ballet’s Swan Lake is artistically mesmerizing and highly entertaining. The music is powerful. The dance is beautiful. And the story is enthralling.

However, just as the brilliance of Tchaikovsky’s score is more than the individual notes, and Degas’ impressionist masterpiece The Dance Class is more than the brush strokes, the genius of Wheeldon’s Swan Lake connects on multiple levels, each revealing increasingly beautiful complexity.

In an effort to showcase Wheeldon’s vision for Swan Lake as part of the media campaign in the build-up to opening night, the Joffrey conducted a compelling photo shoot at The Art Institute of Chicago with dancers posing with the impressionist paintings that served, in part, as Wheeldon’s inspiration. It’s here, with Edgar Degas’ Yellow Dancers (In the Wings) in gallery 226 that one can begin to understand the brilliance of Wheeldon’s ballet.

Degas, one of the founders of the impressionism, dedicated more than half of his paintings to scenes of dancers from the Paris Opera and ballet studios. Much like Tchaikovsky, who pushed the envelope from within the existing musical forms of his day with his use of percussion to build the intensity of his scores, Degas and the Impressionists revolutionized the art world from within, rejecting the conventional style in favor of a lighter, brighter, and more contemporary form of realism. Degas chose to portray his subjects in their natural state, eschewing the idealized beauty and synchronicity one might expect from a scene focused on ballerinas. He, instead, painted his dancers stretching, laughing, conversing, relaxing, and waiting in the wings, oftentimes with predatory patrons ominously lurking on the side of the stage.

Wheeldon chose this scene--reminiscent of Degas’ Ballet Class and his Rehearsal of the Ballet Onstage--as the backdrop for his Swan Lake. He replaced the birthday of Siegfried from the traditional Act One with the frenetic scene of the Paris opera ballet studio moments before rehearsal. With this stroke of genius, his ballet inhabits three time periods at once: late 19th century Paris, a Medieval German fairytale, and a Wednesday night in Chicago.

As Act One opens, the painting comes to life--complete with ballerinas warming up, the Dance Master with his signature staff, and the creepy Patron whispering overtures to the ballerinas. From the outset, the Principal Dancer frets over the Patron’s growing interest in Odette. Though brilliant and, frankly, more interesting than the original version, this high-energy first act, with its updated storyline, may trouble Swan Lake traditionalists expecting a bit more precision and elegance--but these troubles are laid to rest with a first act pas de trois, beautifully performed by April Daly, Yoshihisa Arai, and Amanda Assucena, which remains faithful to the original style.

To assist in the transition within the Principal Dancer’s fantasy from Paris studio to Medieval German fairytale, Adrianne Lobel’s brilliant set features studio windows that open and then melt away to reveal the second act’s lake, signaling a return to Pepita and Ivanov’s original choreography from the 1894 reboot of Tchaikovsky’s first ballet. As further evidence that Wheeldon is at the height of his powers, he seamlessly weaves together his modern stylistic choreography with the best-loved moments from the Pepita/Ivanov original. Like Tchaikovsky and Degas, Wheeldon’s brilliance comes both from his reverence for the elements of genius found in the original masterpiece and his desire to push from within these conventions to create something truly innovative and revolutionary. With the second act, the Principal Dancer is fully immersed in his fantasy role as Siegfried in pursuit of Odette, and we are given a first-hand look at the Joffrey Ballet Company’s style and technical mastery of the form, as well as Jaiani’s incredible artistry and talent.

As impressive as she is in the second act, Jaiani’s third act Odile is absolutely mesmerizing. At a gala dinner celebrating the opening of the company’s Swan Lake, the Principal Dancer, increasingly lost in his dream state as Siegfried, is led astray by the Patron Von Rothbart’s spell. In a sequence brilliantly conceived as a take on the costume ball from the original Swan Lake, Wheeldon’s treatise on seduction builds through a series of brilliant performances, like the gorgeous pas de quatres, culminating with Jaiani’s ecstatic 32 fouettes. Fooled by Von Rothbart’s spell and mesmerized by Odile, the Principal Dancer realizes he has proclaimed his love for the Black Swan and his fate is sealed.

In his anguish, he dives deep into his fantasy as Siegfried to make amends and free Odette from Von Rothbart, once and for all. He finds Odette and proclaims his love for her and she forgives him, but Von Rothbart appears and once again refuses to free Odette from his spell. In a finale that appears to be hurtling towards a showdown between the wizard and the prince, the swans exact the final revenge and kill Von Rothbart, condemning Odette to remain a swan forever. As the sun rises, the swans fly away, and the Principal Dancer finds himself once again in the Paris Opera Studio.

And, once again, herein lies the brilliance of Wheeldon’s Swan Lake. There have been almost as many endings for Swan Lake as there have been productions. In Tchaikovsky’s original ending, Siegfried kills Odette. In subsequent endings, Siegfried and Odette realize they can never break the spell and take their own lives by jumping into the lake. However, though controversial, the Wheeldon’s ending feels utterly relevant for our times and fits perfectly with his emphasis on artistic innovation. Though he loses Odette, he wins the ballet. And the ballet’s the thing.

It’s difficult to put into words the feeling I had as I left the Auditorium theater late Wednesday night after having witnessed a ballet I believe may have been one of the great artistic achievements I’ll see in my lifetime.

But, again, plain and simple. This is the best I can do. Christopher Wheeldon’s Swan Lake is a Masterpiece.