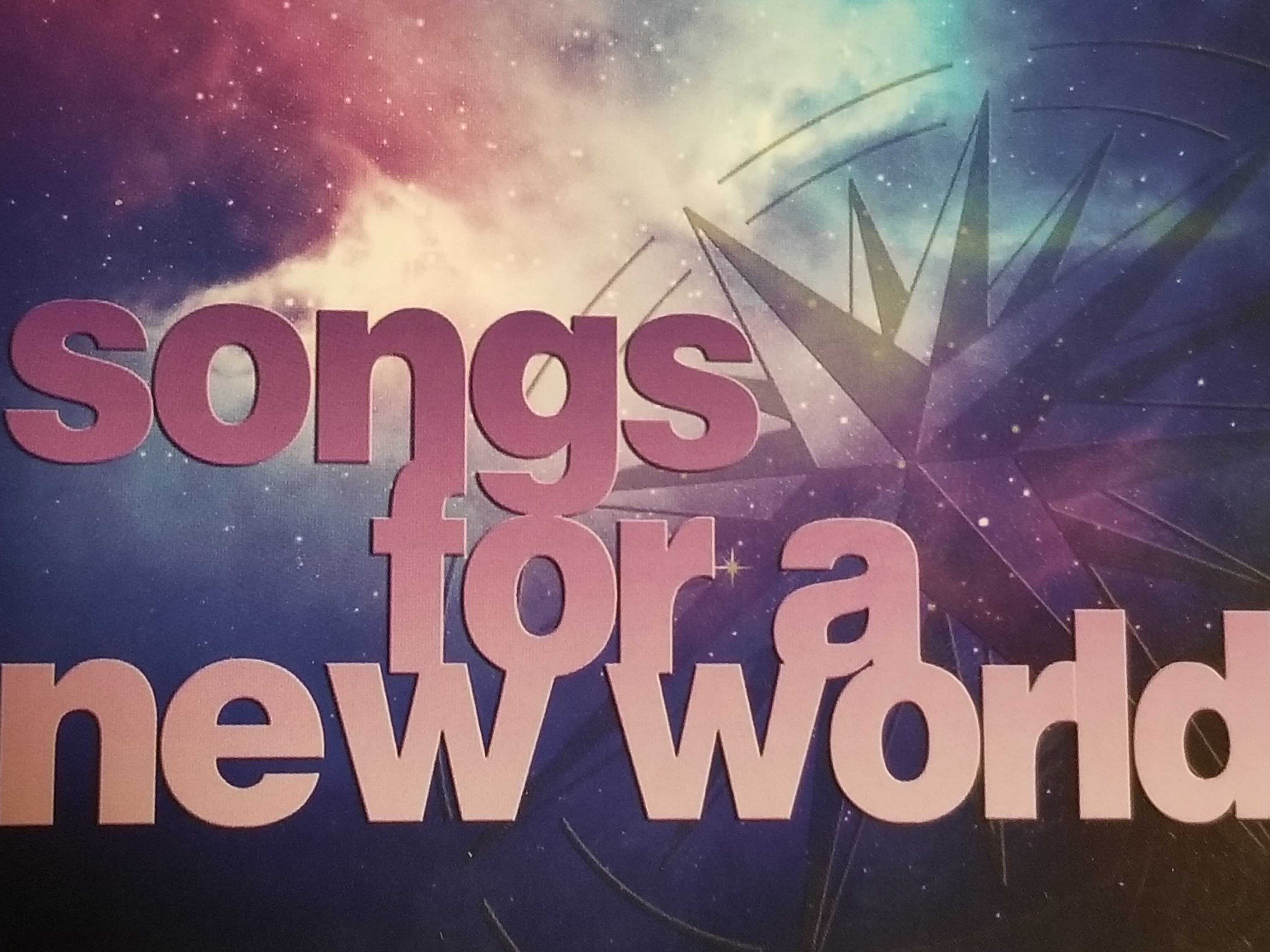 I find it difficult to review shows that are essentially song cycles—collections of songs without plot or characters. Too often, the songs end up blending together and not really saying a whole lot. This is decidedly not the case with Dominican University’s Songs For a New World, a collection of songs written by Jason Robert Brown that is all about the choices we face as human beings. Some songs deal with matters of faith, some with war, some with family and relationships. (The latter category includes the two funniest songs of the night.) Metaphors flow from song to song, echoing throughout the show. Mountains and water appear again and again, and at least half of the songs have images of flying (from the very first lines, when we hear a clarion call that it is “time to fly”). These connections among the songs make Brown’s show into something more than just a revue or a song cycle. Critic Scott Miller called it an “abstract musical,” and that is a pretty good phrase for it: themes keep coming up again and again, and some individual songs even seem to be connected to others as if they shared characters. What this gives us is a musical that, without any overt connections, holds together beautifully and seems to tell a story from start to finish. And director Krista Hansen’s cast tells that story in a lovely, lively 80 minutes of song.

It’s about one moment. It’s about hitting the wall and having to make a choice, or take a stand, or turn around and go back.

From the first song, Brown tells us the main theme of the show: the choices that we make or don’t make and where they lead us. Hansen uses the multi-level set designed by Bill Jenkins to great advantage in this song and throughout the show, though it leads her to a penchant for symmetry in blocking that made me think at times that Wes Anderson had directed, not that that is necessarily bad. When a show that is designed symmetrically also looks symmetrical, there is something subliminally wonderful about that. And this is a fairly symmetrical show. It can be argued that songs at opposite spots in the evening’s lineup are comments on each other, though there are several instances of songs closer together that reiterate ideas as well. The second song, woven into the first, features a striking Nik Whitcomb singing a prayer to the Lord for safe passage for the passengers of the ship he is sailing in 1492 (probably not Columbus but the thousands of Jews expelled from Spain at this time). They are, of course, looking for a New World. Whitcomb is perfect in this spiritual number, using a Christian music style for a song about Jews: another theme of the show is that we are all traveling these roads—or sailing these seas—together. Whitcomb returns to this concept in the play’s penultimate song, “Flying Home” (the most overt flying reference of the night by far), once again using his strong physical presence and powerful voice to send a message to God. In this case, though, the message (delivered in a pop style) is that his journey is over: the character he is playing in that song is a soldier who has died and is “flying home” to heaven.

This song is one of a paired couple of songs about war, following a number called “The Flagmaker” about a seamstress who sews flags to pass the time while waiting for news of her husband and, it seems her son, at the front in the War for Independence. That she expects death is clear from the lyrics, in which she sings of “the lights glaring and calls sounding and the clenching in your chest.” Abby Matus’ sad, plaintive voice in this song sells it perfectly. Matus is backed by a group of female ensemble members “stitching,” extracting from her lone voice an image of all of the women left behind by the war. The opposite number to “The Flagmaker” is the song “Just One Step,” which at first would seem to have very little to do with a woman desperately praying for her loved ones to return from war. It is a comic song about a wealthy woman (Valerie Jonkoff) on a ledge in New York City threatening to jump because her husband is both ignoring her and cheating on her. Jonkoff is wonderfully funny in the role, adopting an NYC accent to better illustrate the character as she implores her man to “watch me fly.” Here we see a woman who, like Matus’s character, is calling out for her husband to come back to her; this time, though, the effect is silly and sad at the same time. This woman has everything, but she lacks joy. Her plight seems similar to the woman played by Whitney Elise Jackson in “Stars and Moon” who turns down two different romantic dreamer lovers in favor of wealth and stability, only to learn too late that she needed the romance. (There is the reflection of a broken home as well: Jackson’s second lover has left his wife and kids.) These themes parallel with the couple in “I’d Give It All For You” (Jonkoff again with Benjamin Salt) who have left each other, found adventure and fortune, but…well, you see the song’s title. Salt sings,

I had a house while you were gone, a house with silver shutters and a driveway laid in marble and thousands of rooms to fill and miles of space to fly

I drove across the country and I stopped at lots of diners and stared at a million stars and thought I could touch the sky.

Neither his wealth nor her explorations can satisfy like love.

God knows it’s easy to hide, easy to hide from the things that you feel and harder to blindly trust what you can’t understand.

As in so many other songs, this one is about making choices that are hard to make. We keep hearing about this kind of choice. North Homeward is featured in two songs about men who cannot seem to take the steps they wish to take because they lack whatever it takes to follow through. (Full disclosure: Homeward is my son.) In “She Cries,” he tells us, “I don’t like to philosophize; I just want to tell a story,” and proceeds to tell us the tale of a man who wants to leave the woman he is with, but he can’t because he can’t handle her tears. Homeward is another singer with a strong voice, and he uses it to advantage in some of the key moments of this song, holding out some stunning notes. He also shines in another song about a man who can’t pull the trigger: “The World Was Dancing.” In this song, two stories are told simultaneously: one about the singer’s father and his failed attempt to open a store and the other about the singer’s relationship with a girl named Amy (Anna Thomas in a beautiful dream-chorus). Averse to taking risks after watching his father’s dream implode, he leaves her at the altar,

Cause dreams get burned down overnight. I wasn’t quite prepared to choose, to take that risk and maybe lose.

Two of the showiest numbers of the night come near the middle. In “Surabaya Santa,” Kyrie Anderson (who also has a lovely and sad song earlier with “I’m Not Afraid of Anything”) plays Mrs. Santa Claus with a Dietrich-like accent. Mrs. C is seriously regretting the choice she made in marrying Kris Kringle:

Before I had a chance to take control, we retired to your palace on the Pole where we only had ourselves and the reindeer and the elves and a lot of things we never said about the life I could have led if I had had the sense to stay away.

Instead, she spends countless days drinking and wishing things were different. Anderson is brilliant here and the number brings down the house. The same can be said of Whitcomb’s “The Steam Train,” in which he shuns the “praying to God” motif of his other songs and instead plays a young basketball player who desperately wants to escape a horrible life. He describes himself as

Whitcomb’s clear lack of skill with the ball adds some levity to a song that is, at its core, about a boy who wants to make a huge life choice because most of his friends have been killed.

Another powerful performance is given by Luke Halpern, who, with Salt, sings “The River Won’t Flow,” a song about how, too often, life doesn’t come through for you no matter what choice you make. (This number features some wonderful found percussion, with ensemble members creating sound with everything from a broom to a ratchet wrench.) His feature number, though, is “King of the World,” about an activist who is locked in prison and missing his family (yes, that is another consistent theme). “Why are we punished for wanting to explore?” he asks, mirroring his earlier song, before affirming,

I will not be defeated: I will stand like a mountain and the road will stretch before me and they’ll know it’s time to follow

Sandwiched between “Surabaya Santa” and “King of the World” is a gorgeous song by Annika Strolle called “Christmas Lullabye.” Strolle plays a pregnant, unmarried woman who is determined to

be like Mother Mary with a blessing in my soul and the future of the world inside of me.

It’s a lovely song, and Strolle’s voice is perfect for it.

The company, rounded out by Patty Kirin, Bryson Reid, and Robert Sowa, brings things to a conclusion by finishing the symmetry of the show, completing the theme begun in the opening in “Hear My Song”: “Hear my song: It was made for the time when you don’t know where to go,” before ending the show with a perfect repetition of the opening line: “A new world calls across the ocean.”

Songs For a New World is definitely not your typical song cycle. Dominican’s glorious show, with some wonderful lighting by Samantha K. Barr and a stellar four-piece orchestra led by David Fiorello, is a complexly interwoven series of musical numbers that aims to reveal the difficulty and the importance of making choices. Failing to choose, it turns out, is the least effective thing of all: this play tells us that we are constantly faced with choices and we must make them. It reminded me of a line from Sondheim’s Sunday in the Park With George:

You chose and your world was shaken; so what? The choice might have been mistaken; the choosing was not. You have to move on.

I didn’t want to move on after this play was over, and that is probably the best compliment I could give it.

Songs for a New World is playing this weekend only (April 12-15) at Dominican University, Friday and Saturday at 7:30 and Sunday at 3. Tickets can be purchased from the university.

One thought on “Dominican Scores With “Songs For a New World””