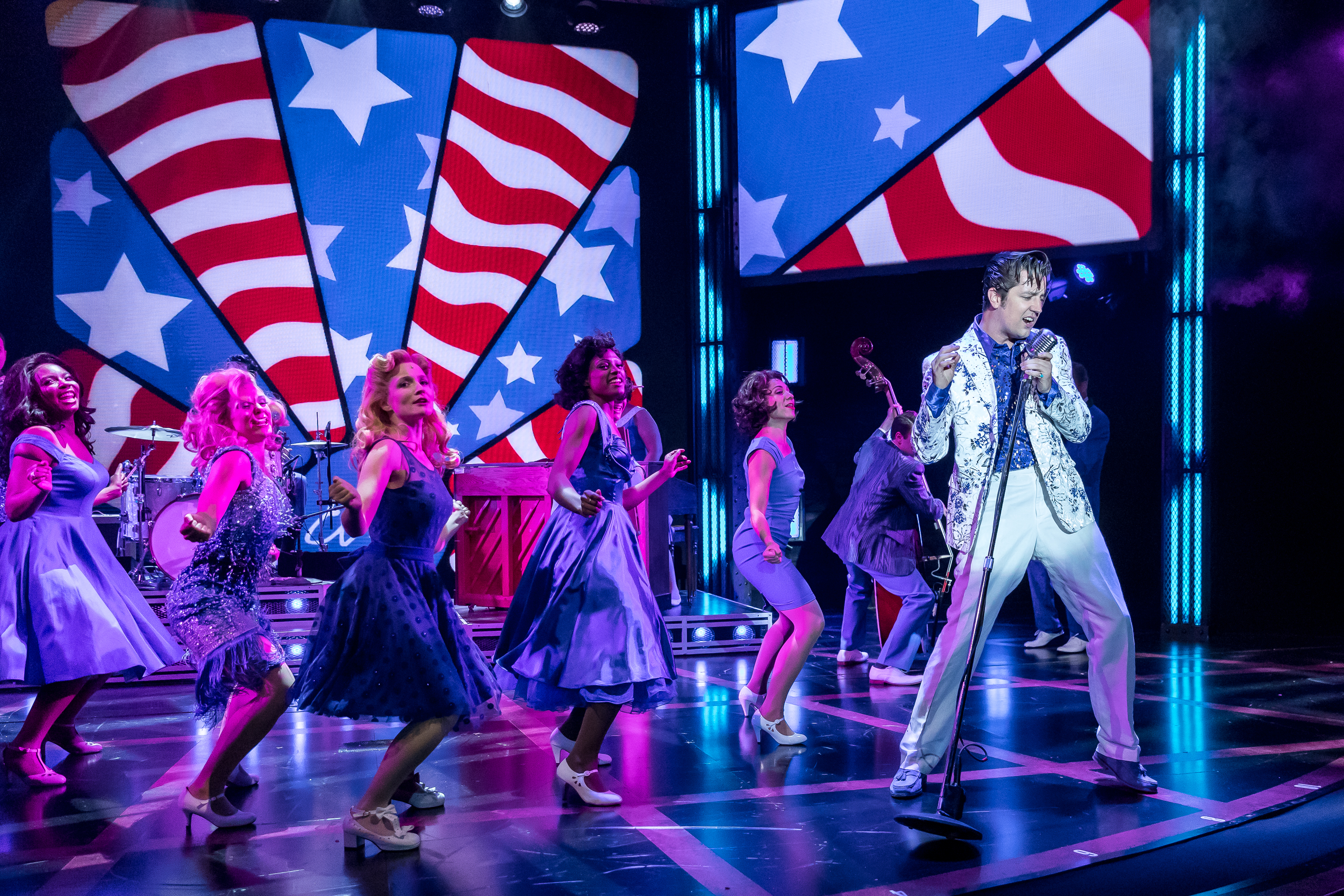 There’s a way to love Heartbreak Hotel. Much like its iconic, complicated subject, this musical is, at the same time, probably destined to be a runaway hit and a little difficult to take seriously. But, like Elvis, if you’re willing to listen, there’s a way to love it. And, let’s be honest, you probably already know what I mean–you know it in your bones–but stay tuned if you’re curious. Written and directed by Floyd Mutrux, and starring Eddie Clendening as a young Elvis Presley, Heartbreak Hotel chronicles the first 18 months of Elvis Presley’s rise to superstardom. Clendening–who returns to the role after playing Presley in the Chicago run of Mutrux’s Million Dollar Quartet–captures the dichotomy of tremendous talent and painful insecurity present in the makeup of the world’s first “Rockabilly” star, as he ascends to his place atop the larger world of Rock n’ Roll, while learning a few lessons about the hard choices of fame along the way. According to Mutrux, the genesis for his musical came while he was writing his smash hit. The original script was too long, so Mutrux broke it into two pieces and ran with Million Dollar Quartet first. But, like so many Elvis devotees, he came back to Memphis to tell the story of an immensely talented young truck driver with a sweet teenage girlfriend and a million dollar voice.

At its heart, Heartbreak Hotel is a love note to Elvis and the early rock n’ roll that made him an icon in American music. Featuring a cross-section of songs from Elvis’s early career, as well as a few landmark songs that influenced his sound, the musical serves as a history lesson wrapped in a jukebox. From “That’s Alright” to “All Shook Up” to “Jailhouse Rock”  the story behind the evolution of Elvis’s sound–cultivated in Sun Studios in Memphis, and then catapulted by RCA Victor with the recording of “Heartbreak Hotel”–serves as the backbone for a musical that uses vignettes and minimal dialogue to set the stage for the music. Aside from the music, as a play Heartbreak Hotel is… well… not much of one. It’s tough to get excited about the storyline–Elvis wants to be a star, but can he make it?–considering every human being on the planet, and certainly everyone in the audience, knows that Elvis makes it. Clendening is an excellent performer, but watching a young Elvis deliver dialogue is not all that compelling. He’s shy and hopelessly awkward, and his relationship with his first girlfriend Dixie Locke (solid performance by Erin Burniston) is hopeless from the start: Elvis is on his way to bigger and better things. The power struggle that plays out between Sun Records producer Sam Phillips (Matt McKenzie) and Colonel Tom Parker (Jerry Kernion) that forms the play’s subplot is interesting as context, but minimal in terms of drama. By far, the most interesting subplot has everything to do with Race, or, in this case, “Race Music.” In an essential history lesson, Mutrux presents an open and shut case that without black gospel, blues, and Rock n’ Roll, and without pioneers like Chuck Berry and Big Momma Thorton, there would be no Elvis. Maybe he would have married his high school sweetheart and driven a truck for the rest of his life, and he would have almost certainly been a lot happier, but we would never have had the music of a profoundly talented white man who sang and danced like he was black.

So, here’s the bottom line. Even with its considerable flaws, I loved this show.

Yes, the script is short and, at times, a little clunky, but the play is an album and the lines are the liner notes–they set up the songs, but they never get in the way. Fewer lines means more music, and, let’s be honest, people don’t buy tickets to shows like this for the talking. They buy them for the music. And the music’s fantastic. Eddie Clendening’s Elvis is just right. His understated take on the shy, awkward young man in search of love and approval explodes with charisma when he picks up his guitar and leans into the microphone. Clendening wisely leaves the more exaggerated features of hokey Elvis imitators at the theater door in favor of a more reverential portrayal of the King. And his voice… perfect. It’s uncanny. It feels more like a coincidence than an imitation, like he owns it, not like he’s pretending. And he’s surrounded by world class talent. Backing up Clendening as the Blue Moon Boys, Matt Codina and Zack Lentino play Scotty Moore and Bill Black, with Jamie Pittle on the drums as DJ Fontana. Steeped in the history of the music, Clendening and the Blue Moon Boys are phenomenal. And the musicians who set the stage and give context to the King are every bit as wonderful. Geno Henderson’s versatile performance as Chuck Berry–not to mention pretty much every other black male musical influence who laid the foundation for Elvis’s sound–is fantastic. At one point Henderson shifts from Chuck Berry to Little Richard to Jerry Lee Lewis in a whirlwind musical history lesson that ends with the argument for why Elvis was crowned King.  But… ohhhhh… Takesha Meshe Kizart and Katherine Lee Bourne… In a play that lives and dies on great music, Kizart and Bourne steal the show. If the entire musical consisted of their version of “Any Way You Want Me,” the song that brought down the house heading into the intermission, it would have been way more than good enough for me. Bottom line… I recommend Heartbreak Hotel. It’s by no means perfect, but a lot can happen after the premiere, and its flaws aren’t fatal. In fact, by the end of the performance, I kinda loved it.

Why? The music and the moment.

There’s a time in the performance–just after the standing ovation at the end of the show–when it is 1957, and Elvis has made it. He isn’t the lost soul who will one day descend into a life of seclusion, hamburgers, and way too many pills–a parody of himself in a jumpsuit–not yet. He is a profoundly talented performer with a voice that will change music, surrounded by profoundly talented musicians and singers who know they’re a part of something important. We clap along as he shakes his hips and plays his guitar, eyes closed, with his band behind him and limitless possibilities ahead.