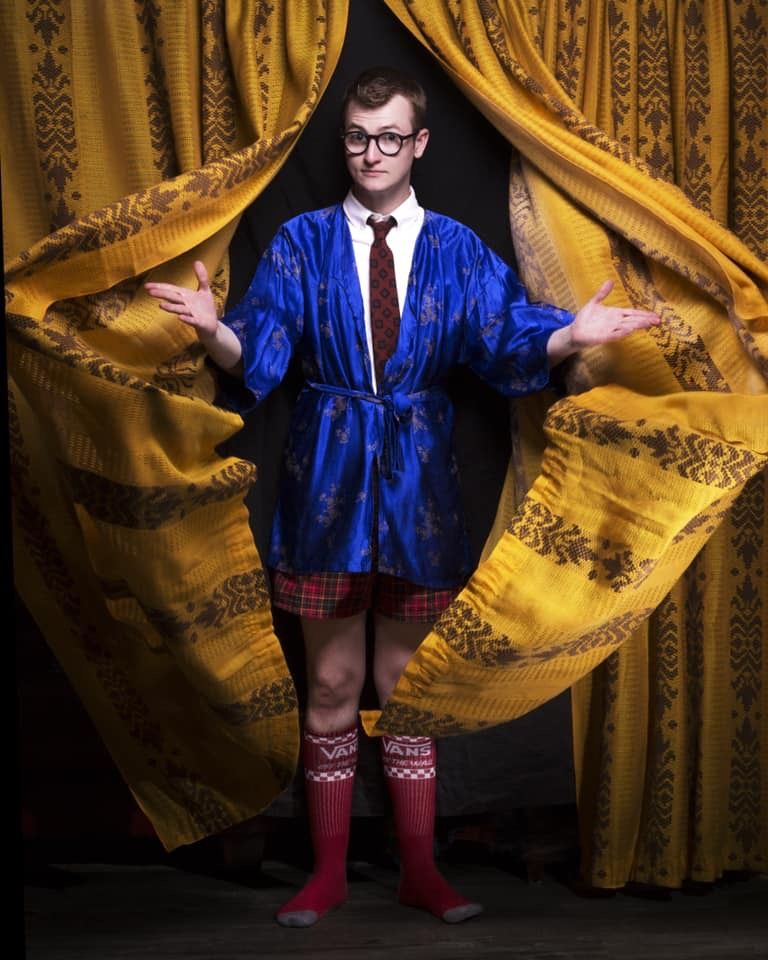 You enter through a laundromat.

…is a sentence I never thought I would lead with in a magic show review, but it’s all about misdirection, so…

You enter through a laundromat.

It turns out this laundromat is no ordinary laundromat or, for that matter, a laundromat at all. This laundromat has a secret doorway. This secret doorway–which isn’t really secret because there’s a guy in the laundromat with an IPad who asks you for the name your tickets are under, and then tells you to walk through said doorway–takes you to a swank bar, which actually is a pretty swank bar. Here you see the first of what will be no less than six magicians performing close-up magic to warm up the crowd as you enjoy a cocktail or two before the show.

When the show’s about to start, you’re taken to a lobby where you’re introduced to the extraordinary Chicago Magic Lounge–a theater that serves as both a venue for magicians and a beautiful homage to the deep and rich history of the Chicago magic scene.

Then there’s another secret door (it’s a thing) and you’re in a cabaret.

And it all makes sense, even though things here are often not as they appear.

With his blend of comedy and magic, Nick Diffatte has been steadily gaining notoriety. He’s appeared on The Late Late Show with James Corden–he crushes his signature spoon flipping trick, google it–and has put together an impressive list of tour stops, including the Magic Castle in Hollywood, en route to his current run as the “Artist in Residence” at The Chicago Magic Lounge through December 22.

At first glance, Diffatte appears to have stepped off the set of Harry Potter. He’s clever, with a self-deprecating sense of humor and, as the show opens, a few tricks up his sleeve. And he really seems to want to flip seven spoons into seven cups on a board, all at once. For a few brief moments, this feels a little different, not as polished or introspective as we’re used to, and it seems like there’s a chance it might not work.

But then the humor builds and, with it, the magic.

In his recent book How Magicians Think: Misdirection, Deception, and Why Magic Matters Joshua Jay, famous for his show Six Impossible Things, not to mention fooling Penn and Teller, writes that the goal of a magician is to bring the audience beyond “wondering” how a trick is done.

The goal is to inspire a sense of “wonder”.

So, that’s a pretty high bar. It’s a whole lot tougher for a magician to inspire a sense of wonder than it is to write about it. But, in his “Offbeat” way, Nick Diffatte does just that.

How does he do it? Sleight of hand? Bold ambition? Mastery of the craft? Well, yes yes and yes, but that’s not exactly all of it.

Ready for the big reveal? (no spoilers, promise)

Magic is misdirection, and Diffatte’s take on misdirection is to be so captivating and clever that you almost forget you’re in the middle of a magic show. He sets up the trick and then plays with the audience, so we laugh through the moments when we should feel the tension rising, and then he delivers something wildly different and altogether unexpected.

And a whole lotta laughs.

So here it is. No misdirection.

In a faux laundromat in Andersonville, there’s a magic bar with an homage lounge that leads to a cabaret theater where talented magicians go from table to table performing close up magic to set the stage for a rising star who is such an extraordinary comedian that he almost makes us forget that he’s also an extraordinary magician.

And then he reminds us by revealing…

You should go. Really. It’s an incredible show.

Nick Diffatte: Offbeat runs through December 22 and tickets are available at chicagomagiclounge.com.