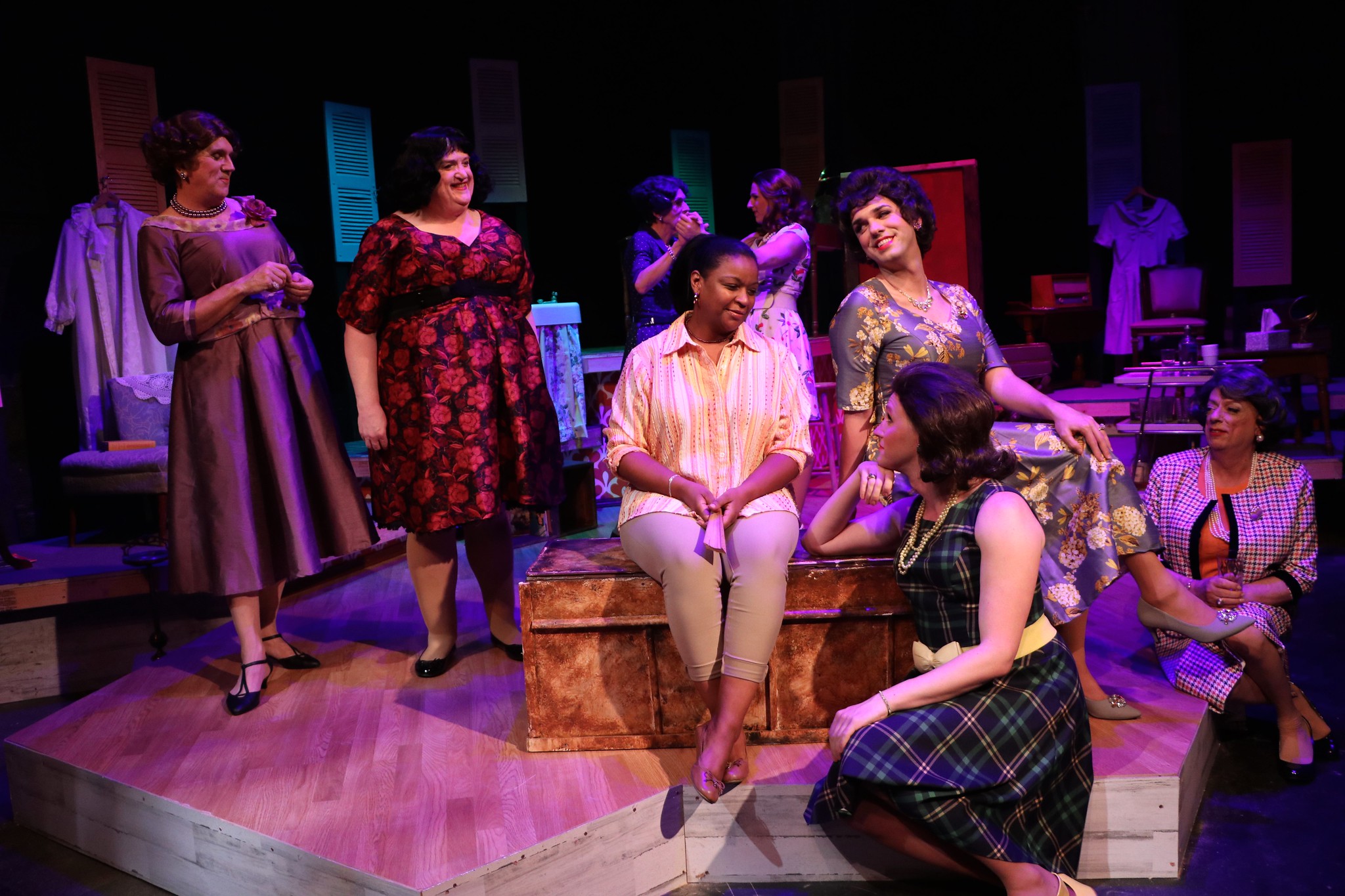 Harvey Fierstein’s playwrighting career was launched with his sensitive Torch Song Trilogy back in 1982. Though he has spent most of the time since then working in the showier world of musicals (Kinky Boots, Hairspray and others), he returned to the world of non-musical drama (I almost wrote “straight drama” but there is generally little “straight” about Fierstein’s work) with 2014’s Tony-nominated Casa Valentina. Pride Films and Plays, under the direction of Michael D. Graham, has finally given this play its overdue Chicago premiere with a collection of fine actors, and it has a lot going for it, even if it does not always follow through well on what it begins.

Casa Valentina is based on a real-life Catskills resort called Casa Susanna where, in the early 60s, crossdressers (then referred to as “transvestites”) gathered in order to indulge their internal desires to dress and act like women for a weekend in an era when neither the law nor the psychiatric community had any tolerance for anything other than traditional heterosexuality. Most of these men were in fact heterosexual, married with children, and held responsible jobs. Some dressed in absolute secret; others had families that indulged them. Here at this resort, though, these men were able to allow “the girl within” to come out to play for awhile, satisfying a need that Fierstein doesn’t even attempt to explain.

The owner of this fictional version of the resort is a man named George (Patrick Byrnes), very happily married to Rita (Nicolia Q. Aguirre), even though she sometimes feels that she is part of a polyamorous relationship that also includes her husband’s alter-ego, Valentina. On this particular weekend, we also meet Bessie (Michael Hagedorn), a jovial, overweight class clown type who constantly quotes his patron saint, Oscar Wilde. Other regulars include Kingsley Day’s Terry, an older man who enjoys his quiet weekends of dress-up, Josh Marshall’s Gloria, a no-nonsense redhead, and The Judge, who allows the pressure of his career to melt into the feminine comfort of Amy. Gloria has also brought a newcomer, Jonathan/Miranda (Micah Kronlokken), an English teacher who is extremely nervous to let himself slip into his inner world.

To this mix comes the imposing figure of Charlotte (Danne W. Taylor), an open crossdresser who publishes a magazine about their community that they all read (and George even contributes to). Charlotte arrives with an agenda: she wants “The Sorority,” the loosely-knit group of “transvestites” to which most of these men belong, to establish itself as a nationally registered social society. Having recently served a year in prison for publishing what the government deemed “pornography,” she argues that such a step will offer them protections they do not currently enjoy. However, it would come with a price: the board members of this society would need to be identified by their real names, risking public exposure. Further, Charlotte insists that all members sign affidavits attesting that they are not homosexuals (the word “gay” did not come into vogue until much later) in order to distance their organization from a subculture she considers deviant and predatory. Her goal in all of this is to assert to the world that transvestites are just regular men, that they contribute to society, that they are harmless, and that they are not in any way connected to the unacceptable group of “seekers of prey” who, she says, hunt children, expose themselves publicly, and proselytize their practices.

This play is sort of like two plays in one. In the first part of each act, the generally likable (other than Charlotte, anyway) characters prance around in fifties dresses (it’s 1962) and curly wigs procured by Robert-Eric West, refer to each other as “she,” and just enjoy their innocent indulgence. They all come alive in Act One when they decide to give the self-conscious Miranda a makeover. They create and enjoy a cute lip-synched performance to forties music (adorably choreographed by Claire Hart Proepper). They joke and laugh (Fierstein is a very funny writer) and have a great time.

The second part of each act, though, becomes extremely serious. In Act One, they meet to discuss Charlotte’s plan, which Valentina supports because being in her magazine would increase traffic at the failing resort and because George has just been questioned by the feds regarding an envelope full of homosexual pornographic photos sent to one of his guests at his address. (He does not know which guest.) The protection Charlotte offers is therefore pretty enticing. The discussion/argument about the proposal gets very heated, though, until Terry diffuses it with a lovely speech gently recalling how the homosexual community has always been there for her. Even so, Charlotte is far from through. Privy to secrets about some of those present, she resorts to blackmail in Act Two to get her way, catalyzing a total breakdown of all of the camaraderie into chaos and destroying the harmony of the group. Neither the blackmail itself nor the specific event that causes the party to implode seems particularly well-motivated, though, and the result is a denouement that, though undeniably emotional and sad, is based on actions that really make very little sense, as though Fierstein felt a bit out of his element and simply rushed them to fruition. Still, BethAnn Smukowski’s brief turn as the judge’s daughter, in which she articulates the ways in which the seemingly harmless actions of these men can harm their families, is heartfelt and painful: the author’s attempt to show another side to the issue even as this little Eden comes apart at the seams.

All of the acting is strong here, undoubtedly brought out by Graham’s thoughtful direction, which makes as much room for long quiet moments of reflection as it does to the playful solidarity and humor of the transvestites. Evan Frank’s set design, though—an attempt to fit multiple locations within the main building of the resort into the Broadway Theatre’s ballroom—ends up creating a very busy space crammed with thrift shop furniture that might have been better if it had been left more open instead of crowding five levels onto the stage. Still, even if Frank, like Fierstein, bites off a little more than he can chew, Casa Valentina remains a powerful, thoughtful glimpse into a little-known subculture. Even today, when the gay and transgender communities have (despite the current administration) made significant inroads into broader society, few people talk about crossdressers. This turn of events would have shocked Charlotte, who is certain that, fifty years hence, her Sorority would have created a world in which people like her are out, open, and everywhere, while homosexuality is still relegated to the shadows, where she thinks it belongs. Watching this play, which is at times hilarious and at others uncomfortable, is a reminder that hatred takes many forms and did not begin with Donald Trump. It is a glimpse into a hidden world of half a century ago that sadly does not seem to have been left behind in today’s more enlightened era.