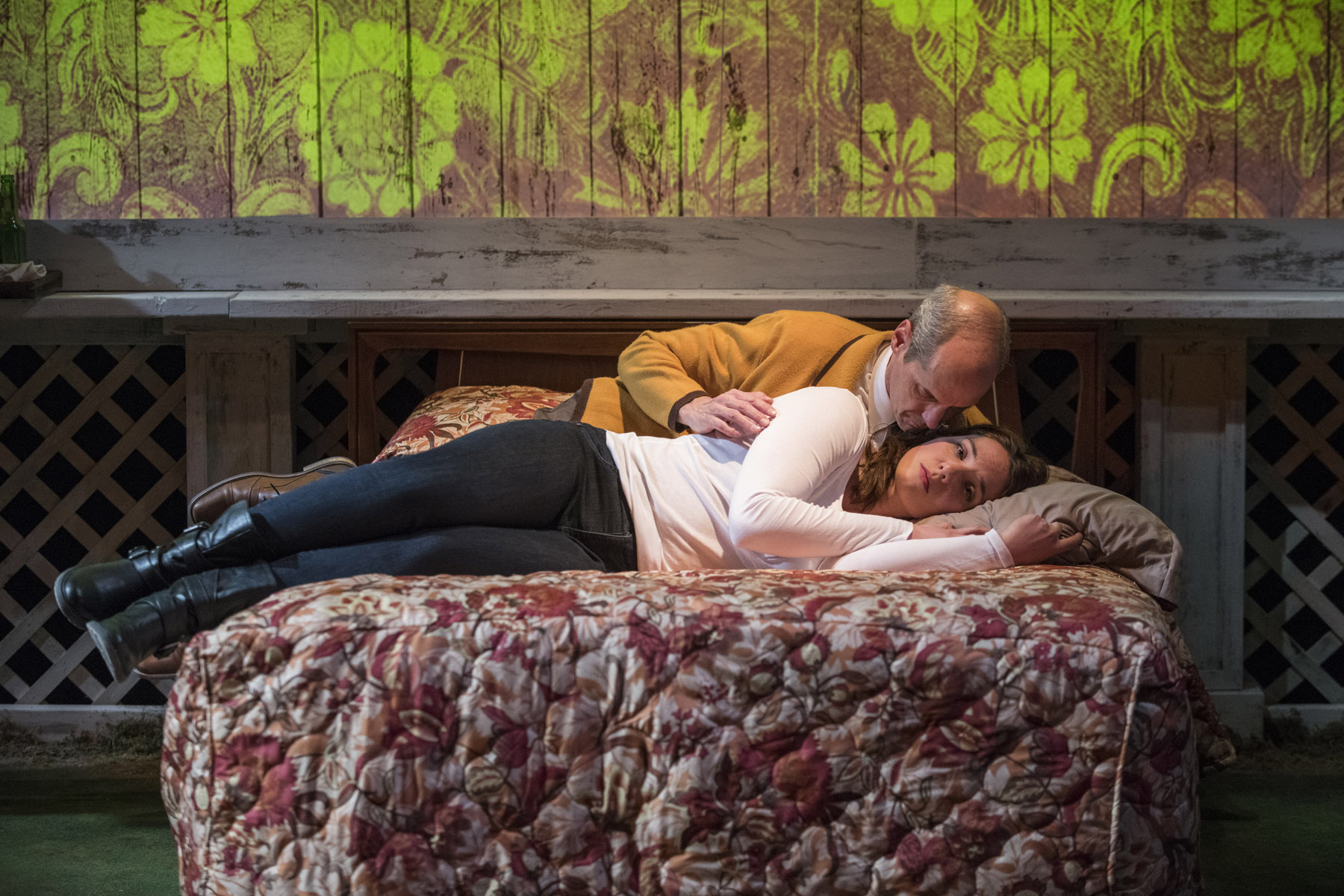 The word “pedophilia” is used once, and only once, in Paula Vogel’s Pulitzer Prize-winning How I Learned to Drive, now playing at the Raven Theatre, but the topic of pedophilia pervades this play that is somehow terribly creepy, powerfully poignant, and hilariously funny, occasionally at the same time. Raven’s production, artfully directed by Cody Estle, highlights all three of these elements as well as a fourth: the pathos of a man and woman caught up in this seemingly endless cycle of pain and power told through the symbolic structure of a driving lesson.

Estle has assembled an excellent ensemble to present Vogel’s uncomfortable play. The three “Greek Chorus” actors, each of whom takes on multiple roles, are outstanding, turning in performances that brightly offset the main couple, if that word can truly be applied here. That “couple” is a girl whose family calls her “Li’l Bit” and her uncle, whom the family calls Peck. (All nicknames in this family, we are told, derive from genitalia.)

Peck (Mark Ulrich) is not portrayed as a demon in this play, though he has preyed on his niece, by his own admission, since the day she was born, telling her that he has loved her since she could fit into his hand. His “courtship” is a slow, steady process; he is willing to wait until he has convinced her that she wants what he does. Ulrich is tremendous in this difficult role, all the more so because he manages to help us to see the internal pain his character carries: Peck isn’t evil; he too is probably a victim in a line that stretches back. (“Who did this to you?” L’il Bit wonders at one point.) Now he has urges that he desperately tries to convince himself are perfectly normal even though he knows they are not. Ulrich pulls no punches on his character’s warped sexuality, but somehow still manages to make the audience feel a kind of sympathy for a man who is merely a pawn in a very long game of chess. (We are even shown a scene in which L’il Bit, as an adult, seduces a teenager. It never stops.)

As L’il Bit, Eliza Stoughton is outstanding. Throughout the play, she plays her character in various ages from 11 to 34, and Stoughton has mastered the often subtle differences among these age groups. Watch the first time “reverse gear” is mentioned: in a second, she switches from an 18-year-old girl to a 16-year-old one. It’s not a huge leap in time, but there are changes in her demeanor that are remarkable. And her crying fit when she is 11 is absolutely perfect: she captures the bewildered tears of a child with real empathy. But the truth of her character is that she is being abused, and it is in adult L’il Bit that we see the confused pain of that. As a child, she is torn between her feelings for a beloved uncle and her awareness that what he is doing must be wrong. As an adult, able to put it all into perspective, she must cope not only with what Peck has done to her but what he has turned her into. Exuberant in the aftermath of her own seduction scene, she declares that she understands now: it’s the feeling of power one gets from being the teacher, the one with experience. There is a whole different kind of horror in her statement: she is not seeing anything at all wrong with what she has done.

The play is told through the extended metaphor of a driving lesson, as it was Peck who taught L’il Bit to drive and it was during the very first such lesson that he first violated her. This scene plays out with two L’il Bits onstage: Stoughton in the car with Ulrich experiencing everything that happened, and Katherine Bourne Taylor, who generally plays the caustically hilarious grandmother of the family, portraying 11-year-old L’il Bit in all of her fear. This is the only instance in which a costume is used to suggest the youth of the child, and it is very effective; costumer Theresa Ham puts her in a pair of overalls, and Taylor does the rest, allowing her adult characteristics to melt away in a painful, powerful moment.

Taylor and the rest of the “Greek Chorus” are outstanding in all of their various roles, which mostly supply the needed comic touches in this harrowing script. Kathryn Acosta plays both Li’l Bit’s mother and aunt (and here Ham does her no favors, as the simple cardigan designed to distinguish one from the other blends into the colors of her dress) and is a strong presence, never more so than when she is teaching her daughter about how to drink in public in a series of brief scenes in which her character’s state of drunkenness seems to contradict what she is telling L’il Bit. Julian Hester, the male member of the chorus, plays Big Pop, the grandfather, as a sex-obsessed monster.

“What good will Shakespeare do you when you’re on her back in the dark?” he asks of his grandchild’s desire to go to college. (“I hate him!” she cries, and it’s easy to see why.) Hester also plays other roles, including a wonderfully comic turn as a waiter who realizes that 16-year-old L’il Bit is far too young for all of the martinis Peck is buying her. However, the fact that the relatives are so vile and awful makes Peck, for all of his monstrous acts, seem more normal, which is perhaps the most frightening aspect of it all.

Jeffrey D. Kmiec has put the whole thing on a sparse set that has as a backdrop a 1960s billboard that, using Tony Churchill’s projections, changes to suit the moment. It’s a nice touch that creates the mood and time period simultaneously. Becca Jeffords’ lighting design is lovely, allowing Estle to change scenes a vista without any visual distraction. And Josh Schmidt’s sound design is great, the mostly subtle soundtrack that brings balance to the whole.

And Estle’s direction itself, as he gets so many disparate performances from his small set of actors, as he toys with set changes when the mood is appropriate (at one point turning it into a dance), as transition moments take on a life of their own, and as he and Intimacy Director Rachel Flesher handle disturbing, difficult moments with painful aplomb, is extraordinary. If you’ve never seen Vogel’s masterwork before, you owe it to yourself to see this production. If you have, Estle manages to mine new depths from a powerful script. It’s not a comfortable, uplifting show, but it’s an excellent one. Don’t miss it.

How I Learned to Drive is now playing at Raven Theatre, 6157 N. Clark, Chicago, until Mar 24. Check the website for specific dates, times, and tickets. Find more information about current plays in our front page recs and at theatreinchicago.com.