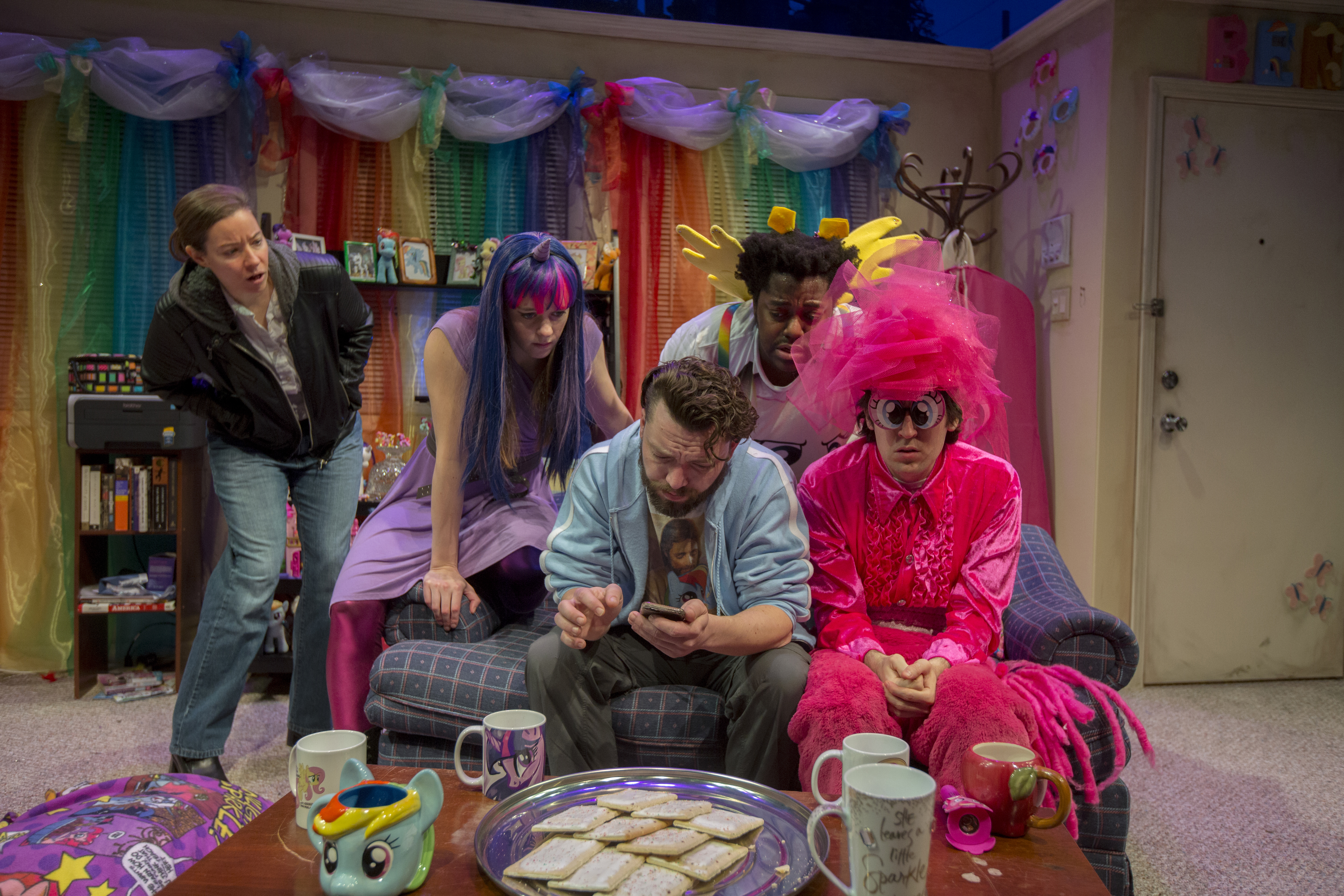 All I knew when I walked into The Antelope Party, now playing at Theatre Wit, was that someone (Eric John Meyer) had written a play about Bronies, those adult lovers of the kids’ TV show “My Little Pony” who enjoy getting together and dressing up as pony characters and roleplaying. This struck me as both bizarre and, oddly, sort of perfect. With a little trepidation (there are so many ways to screw up this premise), I looked forward to the show. Unfortunately, Meyer’s play turns out to be a mishmash of Bronies, fascism, and 9/11 Truthers, and if those things don’t seem to mesh well to you, let’s just say they didn’t for me either.

The set, designed by Joe Schermoly with props by Jesse Gaffney, is great: we walk into a colorful, rainbow-pastel world of pony-perfection, with rainbow curtains, MLP decorations galore, a light-up sign that says the show’s tagline, “Friendship Is Magic,” and—of course—ponies. Varying in size, My Little Ponies are everywhere on set, as if we’ve dropped through a rabbit hole not into Wonderland but Equestria. It’s a working man’s apartment, nothing fancy and in a bad neighborhood (as seen by the external drops and partial billboards), but Ben, its owner (played by an initially sparkling Edward Mawere), has clearly made himself a nest in which his Brony self at least can feel happy.

The first scene of the play introduces us to the rest of the group (the Rust Belt Ponies Meet-Up Group): Rachel (Annie Munch), a calm, friendly soul much like her pony persona, Twilight Sparkle; Shawn (Will Allan), whose personality doesn’t quite seem to fit the cutesy Pinkie Pie he portrays; Doug (Evan Linder), who portrays Rainbow Dash, tellingly the character who is charged with letting others know the weather, and here he brings them the first sign that something is wrong in their magic little world; and Maggie (Anu Bhatt), whose character, Rarity, wants to make the world a more beautiful place, but who ultimately brings disaster on the Rust Belt Ponies. We are also introduced to someone new to the group, Jean (Mary Winn Heider), who, it turns out, came to the meeting by mistake thinking it was a clandestine meeting of 9/11 Truthers. (Don’t ask.)

There is beauty and fun in this first scene. The costumes by Karen Krolak are wonderful examples of the kind of homemade cosplay someone might come up with for a group like this, and the actors almost all fully embody both their human and their pony roles. (Mawere almost channels Fluttershy, the timid, shy, empathetic pony.) While they are in their game (perhaps the most enjoyable part of the whole play), prancing around the apartment inventing scenarios for the ponies to face, we can laugh as we totally enjoy their imaginative world: childlike adults who seem to have found an outlet for immersive joy in a world gone mad.

But those dark forces are gathering nearby, and this is where things start getting out of control. When Doug lets the others know that Maggie was apparently abducted on the street by the oppressive Neighborhood Watch (also known as the Antelope Party), they all worry about her, apprehensive until she shows up and assures them that the Watch merely took her to her father’s house…as he is one of its commanders. We are immediately clued in that this group is a concern, and that would be one thing, but Meyer’s script has other ideas.

Through the character of Shawn, who never really fit as Pinkie Pie in the game due to a somewhat authoritarian personality, the Watch infiltrates the Bronies. Shawn’s costume morphs from an adorably goofy pink amalgam of fabrics and pieces topped by a headpiece that seemed like a pink explosion coming out of his head to a sport coat and fedora with a t-shirt that ominously states: “Pinkie Pie is Watching You Forever.” Maggie nearly assaults Rachel to get her to sign a pledge. Ben ends up almost catatonic. The little Bronie world has turned upside down.

It’s easy to see what Meyer is going for here. In some ways, he could not have chosen a better metaphor. The imaginary perfection of “Friendship is Magic” cannot withstand the cultural onslaught of paranoia that comes with the fascistic Antelopes, who (we learn from news reports) are taking over everywhere. The darker angels of our natures win in this war, and the connection to the current political and cultural situation in America is evident.

However, the problem is that the cultural overlap here is simply too abrupt and dissonant. When Maggie assaults Rachel, my reaction wasn’t Whoa, she’s really drunk all of the Kool-Aid, but Oh, come on! That’s over the top. (Maggie also switches back abruptly in her allegiances; since there is nothing in Rarity’s personality that suggests such a wishy-washy characteristic, it seems that Meyer is just taking shortcuts in his narrative.)

I’d have truly enjoyed a play that showed these people trying to maintain their innocence against a dark backdrop. I might even have accepted the loss of one or two of them (Shawn is a gimme) to the outside forces. But a play that begins with such sweetness and then goes so dark needs more believability to me. I never believed that evil gangs lurked everywhere in Philadelphia, waiting to beat up people wearing silly costumes. (Are there that many people wearing silly costumes in Philly?) I never believed that Shawn possessed the kind of leadership skills to rise in any kind of organization, let alone a fascist one. I never believed Maggie, period, in any of her actions (which was not Bhatt’s fault). As a result, the attempted blend of outrageously oppositional elements just could not come together for me.

This play has a lot of great, funny lines—including one right near the end that had the whole audience exploding—and director Jeremy Wechsler has done a very good job trying to bring it all together and has gotten some marvelous performances from his actors, but ultimately Meyer’s script lets him down. It would have been far better to remain in Equestria.

The Antelope Party is now playing at Theatre Wit, 1229 W. Belmont in Chicago, until February 24. Th-Sat 8 PM; Sundays 3 PM. Tickets are $24-70 and are available from Theatre Wit. Half-price tickets are available. Find more information about current plays on our Current Shows page and at theatreinchicago.com.