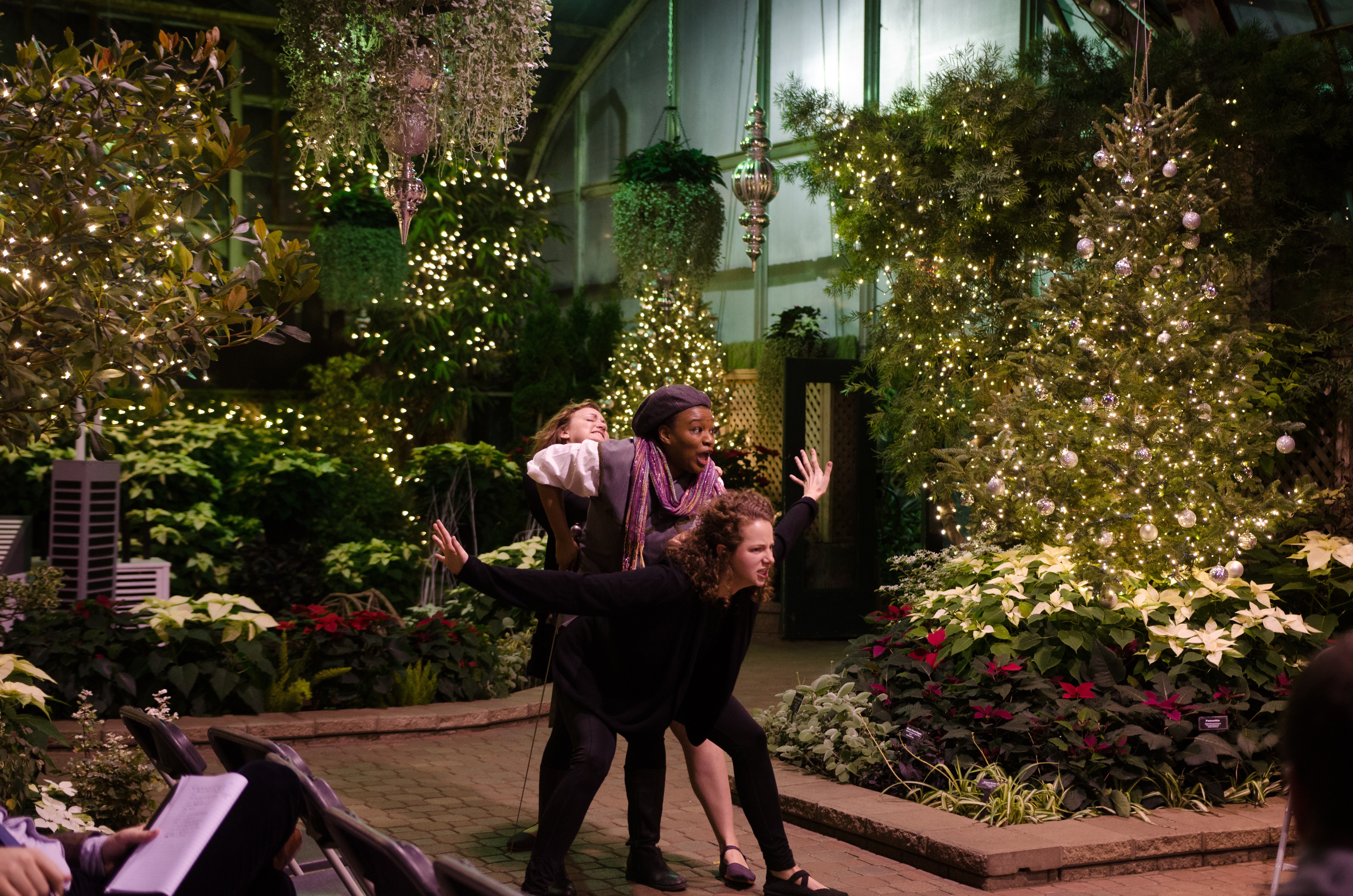 Midsummer Flight’s holiday production managed to be even more enticing and wondrous than the ‘theater’ it was performed in. The production, Twelfth Night, did what most millennials, like myself, would deem impossible: make Shakespeare understandable and enjoyable. The actors also somehow kept my short attention span even in the gorgeous Show Room of the Chicago Conservatory in Lincoln Park. Twelfth Night is a comedy about switched identities, assumed identities, and mixed identities. The show starts off with Feste the Fool (Elizabeth Rentfro) singing us in. We get to hear the enchanting voice of Ms. Rentfro multiple times throughout the evening. Feste, with the help of the musicians playing alongside help create something that I think is quintessential Shakespeare: a ragtag team of talented actors putting on one of the greatest shows ever written.

The costuming was less than stunning but highly effective. It looked like mismatched wardrobe piece and stuff from the local Goodwill. But again, this adds to that Shakespearean charm. The set was minimal. Just a few players’ boxes and a trunk or two. The playing space was simply an aisle between two sets of seating. This made for lots of rear and side views. But you quickly forget about those rears and sides as Viola (LaKecia Harris) takes the stage and starts us off on our misadventure of love triangles. Well, really it’s more like one large love octagon. Harris is a compelling woman, but reveals her true comedy chops as a man. Her comedic gift really shines through in a scene later in the play when she, disguised as he, must duel with what I can only describe as the scuzzy frat boys of the kingdom Illyria, Sir Toby Belch (Jeremy Thompson) and Sir Andrew Aguecheek (Samuel Cheeseman).

The stand out performance of the evening, though, goes to the genderbent Malvolio, played by Amy Malcom. Ms. Malcom’s character choice may come off as very one trick pony, but it is a helluva trick that kept me holding my sides in anticipation of laughter every time she was on stage. Malcom’s portrayal of Malvolio reading a sultry letter from her employer, Olivia (Kristin Hammargren) had me laughing so hard that I had to excuse myself to calm down. I cannot overstate the sheer funny force of this woman. It was also an interesting casting choice to choose a woman for Malvolio. In a city with a talent pool as large as Chicago’s, I am sure they could have found a male actor to play the traditionally male part of Malvolio. I am glad they chose Amy Malcom. In addition to her comic and acting chops, the casting created a lesbian near-tryst, and in these deeply political times, it’s great to have a little bit of homosexuality shoved in your face in a “traditional” setting.

This is a production to see if you aren’t a stuff English teacher, theater geek, or general enjoyer of Shakespeare. This production of Twelfth Night makes for an enjoyable evening of theater for even those least cultured amongst us. Trust me, my friend the electrical engineer enjoyed it too. Most importantly, IT’S FREE. But, you know, maybe make reservations first.

Twelfth Night is now playing at The Show Room of the Lincoln Park Conservatory (presented by Midommer Flight),2391 N Stockton Dr, until December 17. Performances are Thursday through Sunday at 7:30 PM. Tickets are FREE but required reservations can be made at Midsommer Flight. Find more information about current plays on our Current Shows page and at theatreinchicago.com.

One thought on ““Twelfth Night” Is Shakespeare for Everyone”