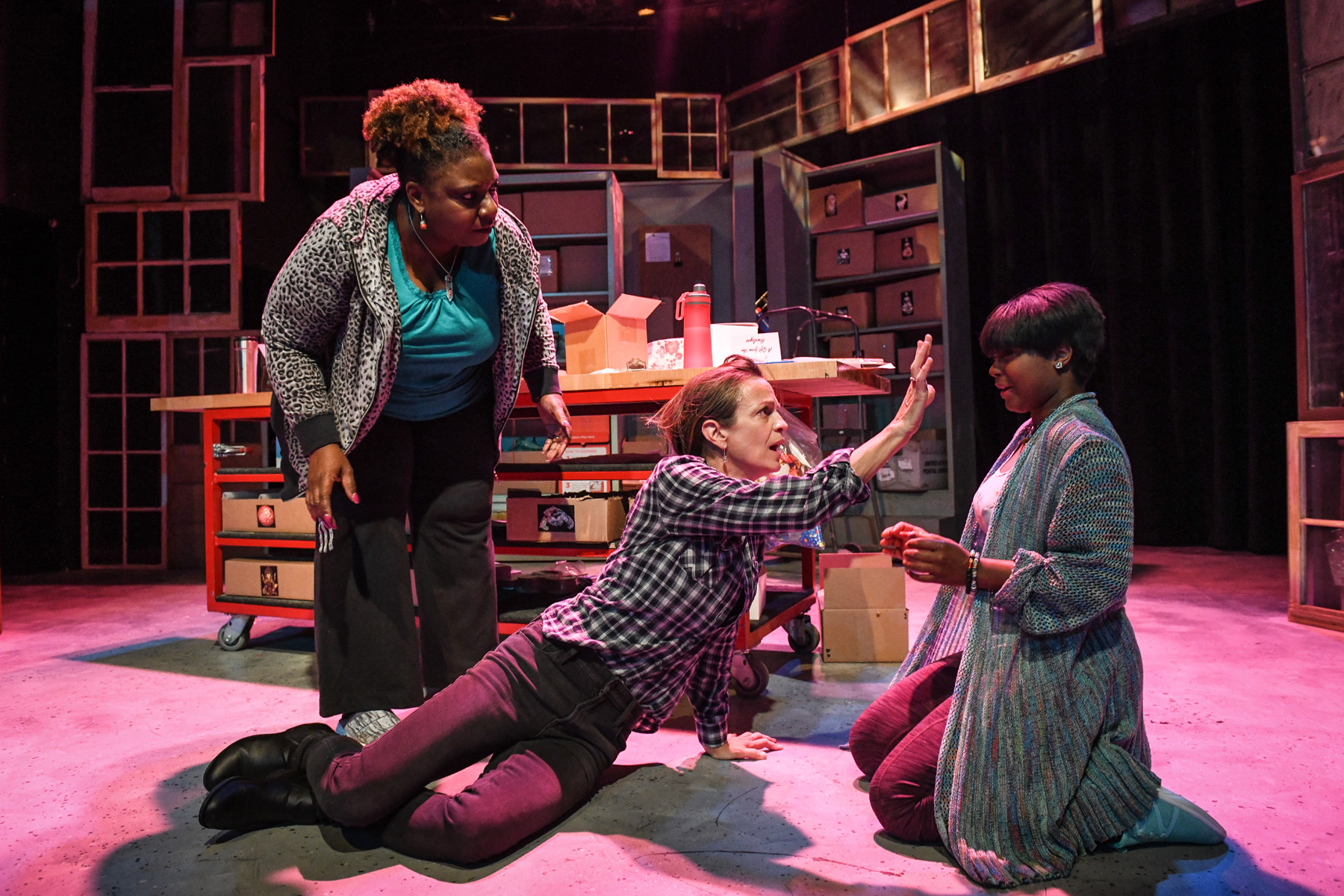 The first time I drove down to Theatre Wit to see Deborah Zoe Laufer’s Be Here Now, my evening was cut short by a near-accident that left me too shaken to do anything but go home: I had stopped concentrating for a moment and very nearly hit a pedestrian, which would have changed both of our lives forever. As it turns out, the play I had been heading to see deals with precisely that kind of random, life-altering event. This sort of thing might be due to a mistake—like a car accident—or to something going awry within our bodies, but everyone’s life is simply a series of moments, the next of which is never guaranteed. Realizing this and making the best of what you’re dealt is what Be Here Now is all about.

Bari (Rebecca Jordan) is an ABD college professor who has spent her misanthropic life exploring and teaching nihilism, the Nietzchean notion that nothing we do really matters because we are all merely whirling toward death. Returning to her dying upstate New York hometown—so broken down that no one even notices when its one restaurant closes—to try (and try and try) to write her dissertation, Bari takes an utterly unfulfilling job in an ironically named fulfillment center to pay the bills and is simply becoming more and more morose and fatalistic. As she explains to one of her co-workers (the perpetually positive LuAnne, Bari’s exact opposite played with childlike innocence by Demetra Dee), no one ever knows when she’s had her last cup of coffee.

Then something happens: Bari starts having extreme headaches that slip into epileptic seizures, after each of which her perception of the world changes dramatically. Suddenly she can hear music and see colors she had never known before, and the realization that such beauty exists opens her heart and mind to the possibility of joy and even love.

Patty (Deanna Reed-Foster), her grounded and realistic co-worker (and LuAnne’s aunt), cautions her to go to see a doctor, as does Mike (Joe Wiens), Patty’s cousin with whom she sets Bari up on a blind date. Both suggest that the cause of these events might well be a brain tumor, which in fact it is. But this realization only causes Bari to have more doubt: would she rather live what may be a very brief life but one in which she can enjoy beauty and feel love, or have the tumor removed and risk returning to the joyless existence she knew before? Is a longer life really worth potentially sacrificing the magical experiences she is having?

Sandy Shinner directs with an eye to Laufer’s understanding of the immense contrasts life throws at us, which her creative team helps to envision. Scenic designer Angela Webber Miller represents the small town’s decay through piles of junk and detritus from lives lived there, while Mike finds pleasure in mining this garbage for items he can use to create artistic beauty. Shelley Strasser’s charmingly placed lights among the discarded chairs, stools, appliances, etc. make them sparkle as if she were lighting a fairy tale, adding to what Mike—and eventually Bari—can see: the hidden possibilities life has to offer if you are willing to look past the darkness. (Mike even manages to find joy in a crow that some boys have shot, taking it in as a pet.) Strasser and sound designer Stephen Gawrit also work together to help us to experience what Bari does in her moments of epiphany, imposing a sense of wonder onto the mundane.

Shinner’s cast also does a fine job of exploring these divergent interpretations of existence. While Dee’s shining smile imbues her character with optimism, Reed-Foster’s more knowledgeable, worldly-wise Patty provides a more pragmatic view of life: having a place to live and a steady job can be joy enough. This doesn’t stop her from attempting to help Bari, though, as the set-up with Mike attests. Mike himself has a history with the world’s precipitous and capriciously shattering whims (Wiens’ performance is wonderfully understated), and Bari helps him as much as he helps her.

As to Bari, Jordan pours herself into both versions of her character. Before the seizures, she is the epitome of the dark, cynical mind at work. In the euphoria of her mysterious and powerful discoveries, though, she becomes someone else altogether, as if LuAnne’s pleasure in what life has to offer has crawled under her skin and very quickly and thoroughly wiped out everything Bari has ever believed. Jordan is wonderful as both Baris, but her greatest achievement here is to make this personality shift completely believable.

We never know what life is going to do to us or how much of it we will get, and Laufer wants us to find a way to make the most of whatever it might be. At the start of the play, the disembodied voice of a yoga instructor tells us to “be here now,” to be present for every moment of our own lives. All four characters in this play come to know the importance of this, whether through tragedy, practicality, religion, or the unpredictable whims of the cosmos. We cannot control what happens to us, but by being thoroughly and emotionally present for it, we can learn how to handle it.