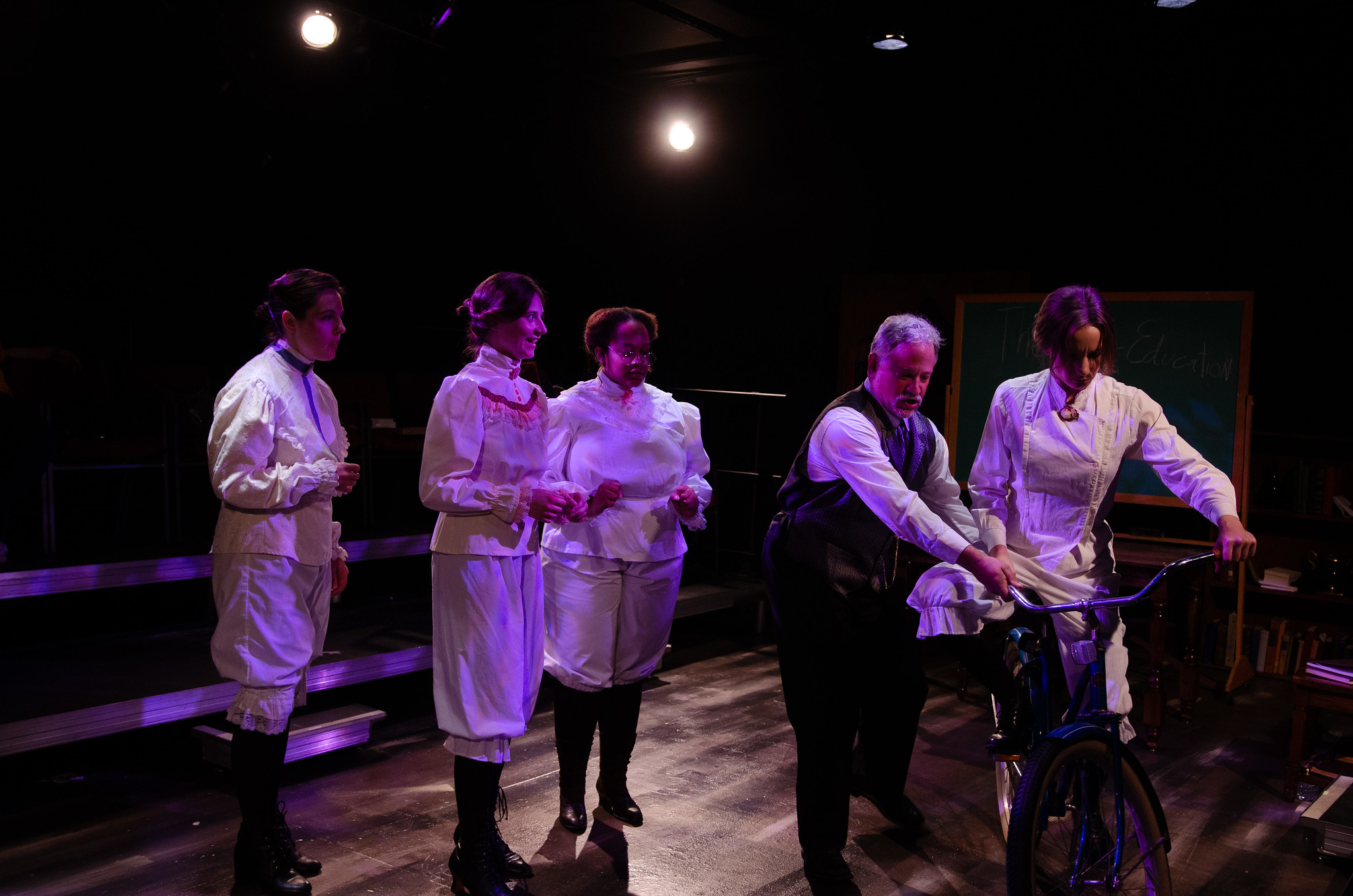 Sometimes a play is also a kind of history lesson, and Jessica Swale’s Blue Stockings is one such show. Swale (Nell Gwynn) takes on the little known (at least on this side of the pond) story of the scholarly women who dared to take on the centuries-old tradition of male-only matriculation at England’s prestigious Cambridge University back in 1896, when the notion of females receiving an actual degree was cause for vitriolic retribution by those who sought to protect the status quo. Swale’s play—at times very funny, at others romantic, and at others powerfully dramatic—is fictional, but it tackles real-world feminist issues of the late 19th Century that strongly relate to issues concerning us today.

The play centers on a group of four science scholars at the all-female Girton College at a time when women’s education was considered by many to be at best a frivolous waste of time and at worst a sign of the impending destruction of the family and the entire British way of life. Romantic would-be astronomer Tess (Heather Kae Smith), dedicated but nervous Celia (Julia Rowley), proto-Bohemian Carolyn (Elsie Marie Davis), and brilliant scholarship student Maeve (Imani Lyvette) take on the establishment with the aid of a handful of educators who believe in their potential. These include Girton headmistress Elizabeth Welsh (Jamie Bragg), “moral science” teacher Miss Blake (Cameron Feagin), and Trinity College lecturer Mr. Banks (Patrick Blashill). Miss Welsh and the others have a plan that will, after years of non-action, convince the university at least to put the notion of degrees for women to a vote (though its chances of passing in the all-male university senate seem remote).

Swale takes us to a time when even the idea of a woman riding a bicycle was cause for alarm (from both genders) and many university professors (and their male students) could not conceive of a reason for these women to be here. One particularly chauvinistic and callous professor (played by Jared Dennis) actually interrupts a question from Tess with “Miss, why are you here? This is a lecture hall, not a laundry,” before throwing her out of class altogether. Other professors opine that education is merely “a hobby” for these girls, and one (also played by Dennis), couches his criticism in the language of realistic concern by saying that “these girls will never be wives. They’ll sacrifice all of that. And for what? They might want to be scientists, they won’t be. So where does that leave them?”

The male students are not much better. Vijay Sarathi, in a strong performance, plays one such righteously virulent young man, Lloyd, who declares that women who would desire this are “not natural” and that they have no right to access to an institution created by men who “built this country.” Others, less angry, see the arrival of these women as a curiosity at best or as an opportunity to find romance (or at least a good time). And even Tess’s lifelong friend Will (Martin Diaz-Valdez), who is a Trinity student, seems more interested in “protecting” her than in supporting her in her endeavors.

Director Spenser Davis uses his talented ensemble well and finds ways (with the aid of lighting designer Claire Sangster) to keep the sparse set alive as it stands in for a variety of locations. Davis handles both intimate, tender moments and more crowded scenes well, keeping the play tight and propelling it forward. It is a bit confusing at times when the male actors appear in multiple roles, though costume designer Rachel Sypniewski does a lovely job recreating late Victorian wardrobes. But there are only so many variations on black to go around, and the men of that era were not heavily into colors. Davis helps to distinguish some of them through accents, but that too is difficult: these people are, after all, from similar social backgrounds and they are all together at Cambridge.

It is fascinating to watch this impressive, engaging, and important play in an era in which it is easy to observe that, no matter how far women have come, it’s still men who have the power, and they too often use that power to encumber progress. The retrograde motion of this country’s abortion laws is one indication of this, but we can find it in the vociferous and vicious attacks on the first female Presidential candidate, the repeated lax punishments and excuses made for rapists across the nation, and even the treatment of the LGBTQ community. (It is, after all, the notion of people not behaving according to strictly defined gender roles that created the hatred in the first place). Watching this much energy being expended to keep a few women out of university is as instructive as it is painful. But it is mostly the women here who constantly remind us of the value of education in the first place.

“The value of your lessons isn’t knowledge,” Miss Blake tells them. “It is the fact that you are learning to think.” As a veteran teacher, I can tell you that this is the biggest and most important lesson of them all, and it is also the one that scares people the most if their goal is to maintain the status quo. There is a reason that, back in the 80s and 90s, the first thing that the far right wing did in order to try to “take back” the country was to take over local school boards. They understood that if you control what is learned you control the people, and that allowing free-thinking to go unchecked is dangerous to those who like things as they are. “Learning to think” makes us stronger citizens and more outspoken critics of institutions that are designed to hold us in our place. Blue Stockings reminds us that even the basic rights—to education, to voting—are not God-given but are anointed by those in charge. It was an enormous struggle to get them in the first place; now we must keep struggling in order to keep them.

Blue Stockings is a Promethean Theatre Ensemble production now playing at The Den Theatre, 1333 N. Milwaukee Ave, Chicago through Oct 13. Check the website for specific dates, times, and tickets. Find more information about current plays in our front page recs and at theatreinchicago.com.