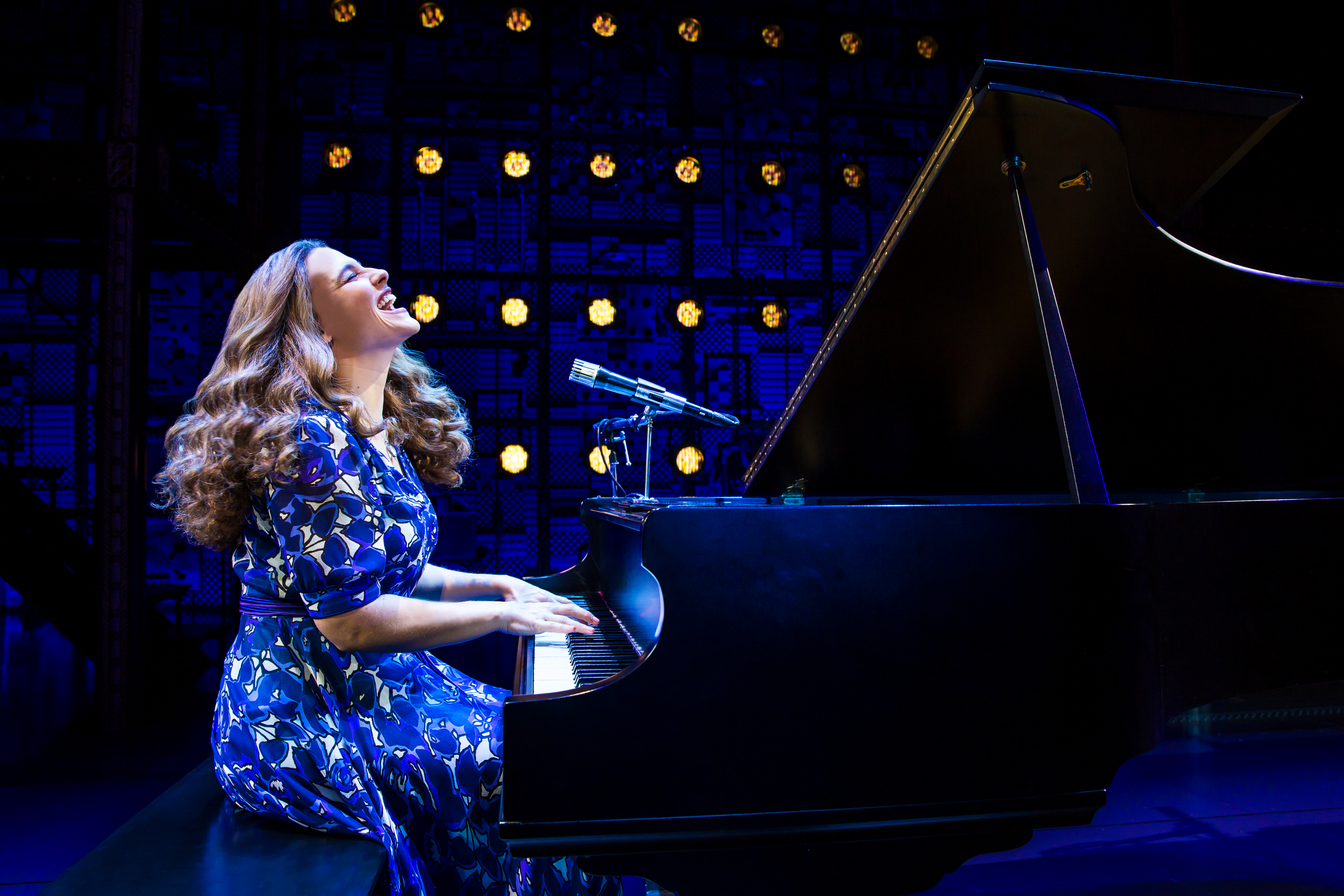 When the Carole King songbook compilation musical Beautiful first came out, I wasn’t all that excited by the prospect of seeing it, though I have always loved her music. I’ve just seen one too many musicals loosely stitched together from a given artist’s oeuvre to want my intense memories of days spent listening to “Tapestry” and feeling as if King was singing just to me ruined by a bad play. As it turns out, I couldn’t have been more wrong: Beautiful is an excellent play, one that would probably stand up even without the familiar tunes. Douglas McGrath’s book tells the true story of King’s life, a life that held every bit as much drama, love, joy, and pain as her songs. And, as directed by Marc Bruni and choreographed by Josh Prince, both those songs and that life come alive on the stage of the Cadillac Palace Theatre.

Sarah Bockel stars as King, whom we glimpse at her 1972 Carnegie Hall concert before actually meeting her years earlier at age sixteen, when she was a precocious college freshman (“I skipped two grades”) who wants to give up her mother’s (Suzanne Grodner) dream of an education career in favor of becoming a songwriter. She’s been trying hard, but been rejected by everyone until Don Kirschner (James Clow) listens to her song, “It Might As Well Rain Until September” and senses a hit. Unfortunately for King, she can’t pen a follow-up; as Kirschner notes, her melodies are top-notch but her lyrics are mediocre. Enter Gerry Goffin (Andrew Brewer), gorgeous would-be playwright, captivated by King’s talent and wanting to partner up with her both as songwriters and as a couple. When they write “Some Kind of Wonderful” for The Drifters, their careers are off and running, but it isn’t until they get the Shirelles to record “Will You Love Me Tomorrow?” that Goffin can quit his day job and they can devote all of their energy to their passion. Unfortunately, by this time, his attention is drifting: the British Invasion and the arrival of Bob Dylan onto the scene have changed the game, and he is quickly becoming tired of crafting silly little pop tunes—which doesn’t stop him from writing “Locomotion,” a huge hit for Little Eva (Alexis Tidwell), his erstwhile babysitter. Meanwhile, the story also goes into the deep friendship and friendly rivalry the couple had with Barry Mann (Jacob Heimer) and Cynthia Weil (Sarah Goeke), who wrote such songs as “You’ve Lost That Lovin’ Feeling” and “Walkin’ In the Rain.” When Mann and Weil come up with “We’ve Got to Get Out of This Place,” it pushes Goffin over the edge, and his already-wandering eyes wander right out the door. It’s all too much for King, who divorces him and starts re-inventing her life, heading (though she doesn’t know it yet) for the incredible success of “Tapestry.”

This is a dynamite story and a dynamite musical. Played out on sets designed by Derek McLane that slide in and out to create small spaces and open wide to invent giant ones, it contains enough musical excitement for at least two shows. At one early point there is even a brilliant montage of songs from the pre-Goffin and King late 50s and early 60s, a remarkable composition that manages to include at least a dozen familiar hits overlapping with each other. It’s designed both to show the fun artists were already having and to highlight the impact Goffin, King, Allen, and Weil had on the music scene. The recreations of the Drifters, the Shirelles, and others are not intended to blindly mimic the sound of the hits we know but to give life to the stage personas of these iconic groups. The Drifters, in particular, are seen three times, and we watch their evolution from the simple movements and vocals of “Some Kind of Wonderful” to the bold complexities of “On Broadway.” And there cannot be enough said about Bockel’s recreations of King’s songs. Modulating her voice to sound as much like her subject as possible, Bockel gives a performance that makes you feel as if you’ve actually seen King live.

But it isn’t just her singing that commends her: King goes through some difficult emotional turns in this play and Bockel is more than equal to all of them. Even when someone else has the bigger moment, she maintains her character’s steep emotional arc through impressive reactions. In one scene, the four main characters are vacationing together. Goffin snaps at her for little reason and storms out into the night. Bockel’s reaction is so understated—by this point, King is used to her husband’s loose grip on self-control—that her pain could almost be missed, but what can’t be missed is the way she turns that pain into empathy when Weil and Mann also get into a fight. It’s a lovely moment.

Of course, this is a show that belongs to the songs, and as such, it also belongs to the sound designer as much as anyone, and Brian Ronan’s work here is excellent. And music director Susan Draus keeps the orchestra humming; this show sounds great. It looks great, also. Peter Kaczorowski’s lighting design fades into the background, as it should, for home scenes, but pops whenever concert events occur. And the people he is lighting look fabulous thanks to amazing 1960s costumes by Alejo Vietti and wigs by Charles G. LaPointe. Overall, my only real complaint was that King seemed to age a lot faster than others onstage did; she is only 28 in the later scenes before “Tapestry,” yet she appears almost matronly. I know she’s supposed to come off as a bit frumpy next to the super-chic Weil, but it seemed to go a bit overboard.

Beautiful is much more than a handful of Carole King songs. It is a moving portrait of an artist struggling to blend family and her art. It is a loving story of a mother who never put her career, though it was critically important to her, ahead of her children. It is a triumphant tale of a woman who, pushed to the edge by her abandonment by her songwriting and life partner, finally discovered her own unique and important voice. And it is a really beautiful way to spend a couple of hours at the theatre.

Beautiful is now playing at Cadillac Palace Theatre, 151 W. Randolph St, until January 28.  Tickets start at $3o and are available from Broadway In Chicago. Find more information about current plays on our Current Shows page and at theatreinchicago.com.