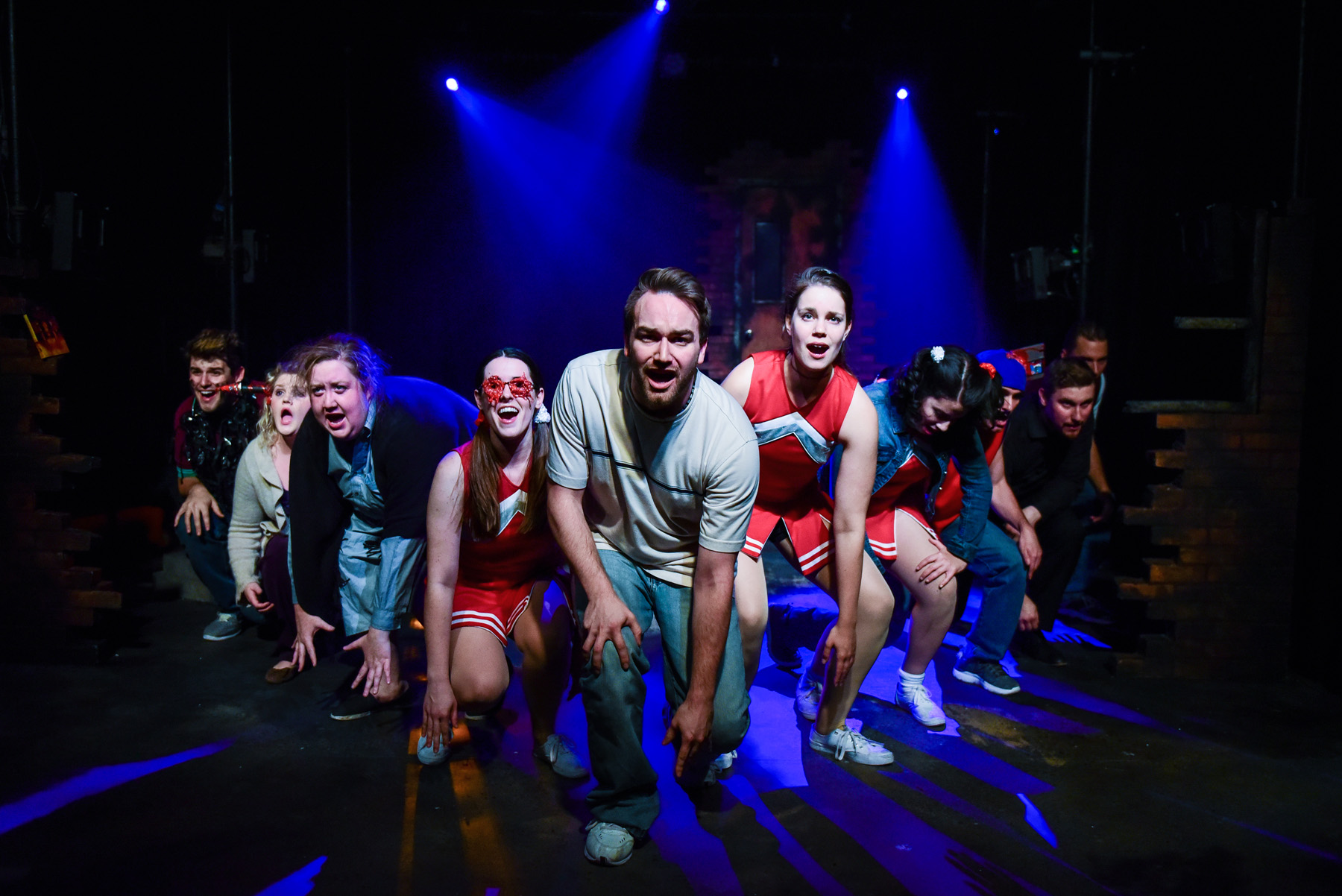 “When will people learn not to suck so badly?”

That is the ultimate lesson not just from Joe Maddon but from Underscore Theatre’s latest original musical, Carrie 2: The Rage (An Unauthorized Musical Parody). Like its more famous predecessor, Carrie 2 was a movie based (this one very loosely) on the 1970s Stephen King novel Carrie. I never saw the sequel, but this contagiously hilarious and enthusiastically presented show almost makes me want to. Almost. There is that 21% Rotten Tomatoes rating, which “Producer” David Kaplinsky mentions as he narrates the show (which takes every campy opportunity to knock the movie it came from) for us.

The musical’s conceit is that we are an audience of investors being asked to pony up millions for something that will make the special effects in Spiderman pale by comparison, so we are being given a narrated preview. Kaplinsky is perfect for the role: he has just the right combination of gravitas and smarm. And, as we see when he takes on the role of Arnie later in the play, he can camp it up with the best of them. As the narrator, he pops up again and again, moving things along with often very funny transition lines.

But of course we didn’t come to see the narrator. The cast of Underscore’s production is uniformly outstanding, and though not all of the songs (composed by author Preston Max Allen) hit the right notes, relying a bit too much on a kind of patter that these 90s kids might, I suppose, have mistaken for rap, most are superb in conveying both the expression and the emotion of the moment. One repeated refrain moves throughout the play, through several songs, telling us that Rachel Lang (the Carrie figure of this musical, played by Demi Zaino with all the intensity and confusion required of such a role) has

come close to feeling something real inside of me. I can feel it building, building…

Zaino has highlight moments throughout, but the show truly belongs to Britain Gebhardt, playing the lone holdover character from the original Carrie, Sue Snell, now a counselor at a new local high school (her old one having, unfortunately, burned down in an incident she complains that no one in town seems to talk about). Wild-eyed and wild-haired, Sue sees her opportunity for redemption when she realizes this new Carrie, Rachel, also has telekinetic powers, and maybe she can finally wipe out the “restless ghosts” that have long haunted her. Unfortunately for her and everyone, she takes the whole thing on herself.

I am a legend, I’m a survivor

I’m going to fix this; call me McGyver

She‘s ill-equipped, in her paranoia, to make good decisions. We can tell this by the way her hands are Joe Biden-ing all over poor Rachel’s face and hair. But only someone with her unique sense of crazy would seek out Rachel’s hyper-religious mom in the asylum she’s been in for a decade.

And Gebhardt almost has the play stolen from under her late in the game by Annie Pfohl, playing Rachel’s mother, whose plaintive song, “Devil in a Diner,” about the love of her life, resolves into an almost untelegraphed belt that speaks of a depth of pain Piper Laurie never got to express in Carrie.

The plot involves a “Points Book” by the football team in which they hook up with girls for the points they receive (based on looks alone). When Rachel’s best friend Lisa (Carisa Gonzales, playing sweet and innocent) becomes a victim, she commits suicide (a moment of screen time in the film, as she points out in a hilarious parting song, but here a full solo):

I seem to have a song here…

Did I get dumped off screen? We should have seen the scene.

After her suicide, Rachel is alone and the play’s villains (it’s a 90s high school piece: of course they are the footballers and cheerleaders) are left to play. When Tracy (a winning Amanda Giles) can’t quite connect with her chosen stud, Jesse (Alex Newkirk, oozing compassion), she is absolutely floored. This just doesn’t happen to her.

But I love you in the way that I want you to love me too.

For half a second we can almost feel sorry for her. Then Jesse falls for Rachel in a scene that might be a “meet-cute” if they hadn’t known each other since second grade. Call it a “notice-cute.” And the vengeance of the high school popular kids is on.

Underscore, known for its original musicals, stages this one in a new space, The Arkham, on Clark Street. A former furniture store, the new theatre has undergone a nice little conversion, though I won’t say it’s comfortable with its wooden chairs crammed in as tightly as possible. Should they remain there—and I’m all for it—I hope they are able down the road to sacrifice a seat in each row and acquire more comfortable seating. It would make a world of difference. The 85-minute running time of this musical was probably about all my back could take.

Still, the space afforded Eric Luchen the opportunity to create a nice little set, and allow some depth for choreographer Maggie Robinson to have some fun with production numbers and co-directors Rachel Elise Johnson and Isaac Loomer to create some glorious stage pictures. In all, this was a wonderful night at the theatre, authorized or not.

Carrie 2: The Rage (An Unauthorized Musical Parody) is now playing at the The Arkham, 4609 N. Clark St  in Chicago, through Nov 19. Tickets are available from underscoretheatre.org; half-price tickets are available. Find more information about this and other plays at theatreinchicago.com.