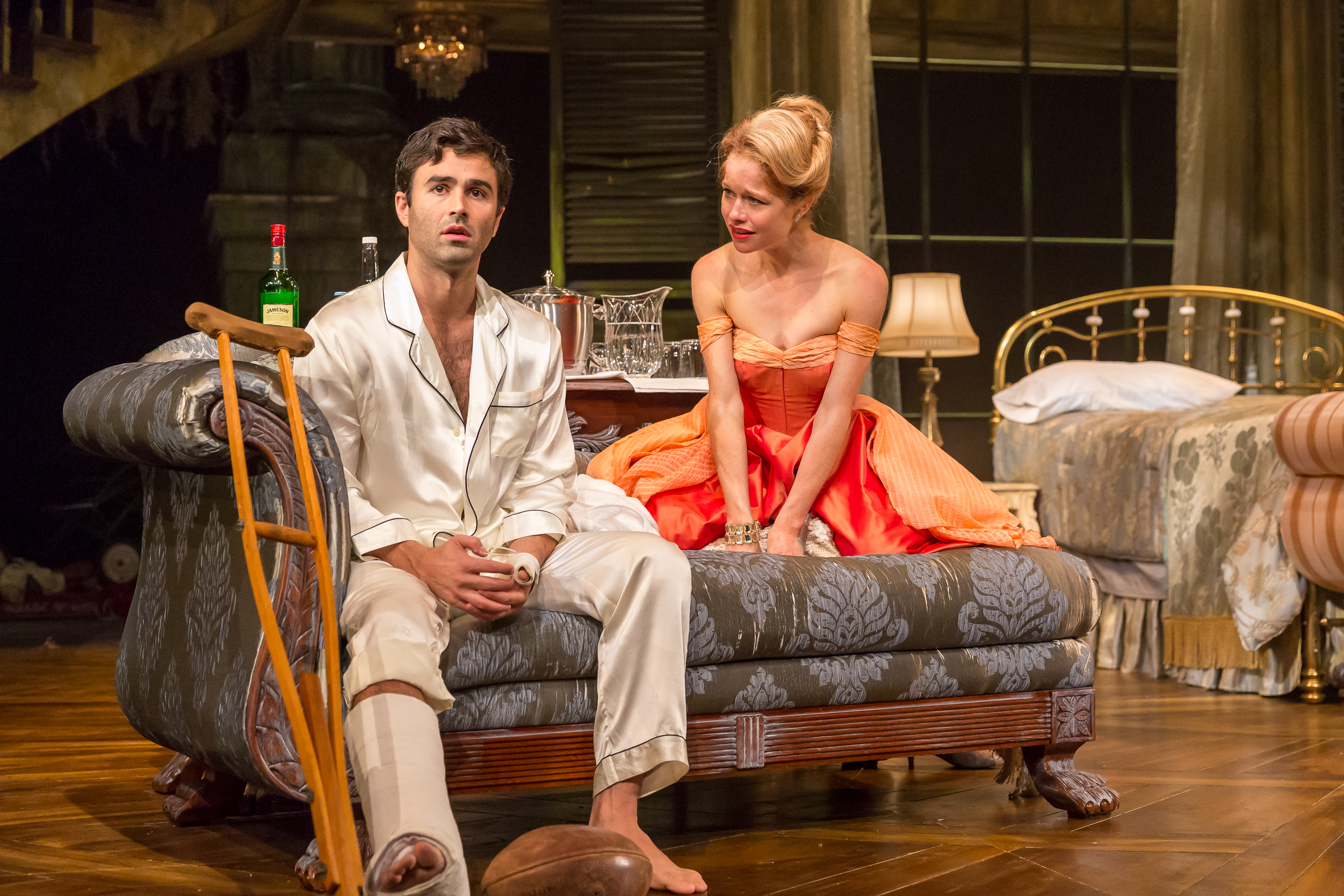 “Has it ever struck you that life is all memory, except for the one present moment that goes by you so quick you hardly catch it going?”  Tennessee Williams–The Milk Train Doesn’t Stop Here Anymore

It felt like a dream, like I was under a spell. There’s a fairly good chance I wasn’t supposed to be on the field trip that rainy Spring day. I remember getting on the bus, though I wasn’t entirely sure where I was going. All I knew was we were going to see a play. I was sixteen-years-old and, until that day, I thought the theatre was Shakespeare, musicals, and holiday shows. I didn’t really know what a play could do. Not yet. Then I got off the bus, walked into the theater, and saw The Glass Menagerie by Tennessee Williams, and everything changed.

Put simply, the Drury Lane’s production of Tennessee Williams’s Pulitzer Prize-winning Cat on a Hot Tin Roof is extraordinary. Under the skillful direction of Marcia Milgrom Dodge, the brutal poetry of a Mississippi Delta plantation family grappling with the anxiety of life and love on Big Daddy’s sixty-fifth birthday sizzles then bursts into flames. Concealing a terminal cancer diagnosis–not to mention enough sexual tension to fill the 900 seat theater–the Pollitt family’s reckoning rockets to an ending will leave even the most ardent theater goers wondering if they can trust what they just witnessed.

Marcia Milgrom Dodge, who returns to the Drury Lane two years after the successful run of her smash hit Smokey Joe’s Cafe, uses every inch of Kevin Depinet’s stunning set and every ounce of her casts’ considerable talent–featuring impossibly complex performances by Genevieve Angelson as Maggie and Matt DeCaro as Big Daddy–to unearth the neurosis of a larger than life Southern family, consumed by “mendacity” and in denial of reality, as they stare into a future they can’t control. The payoff is two hours of riveting theater.

From the opening line, Maggie–the super-charged, deeply frustrated, very funny, sexy, frenetic and cunning wife of Brick, a broken alcoholic with a broken ankle–launches into a tour de force monologue, delivered in varying states of undress.  By turns seductive and panicked, Maggie, played brilliantly by Angelson, delivers a crackling exposition that sets the stage for a birthday night to remember.

Conversely, the quiet, agony-laced show put on by Brick, adeptly played by Anthony Bowden, as he largely ignores and avoids Maggie’s fifteen-minute failed effort at psychoanalytic seduction, provides key insight into the depths of his despondency, not to mention his daily self-destructive march to mind-numbing drunkenness in an effort to achieve what he describes as the magic “click” that signals he’s found his peace. Repressed, to say the least, Brick’s avoidance in the face of Maggie’s persistent rising tension appears, at first, to be the source of the heat that makes Maggie a “Cat on a Hot Tin Roof”. But as the evening proceeds on and the plot thickens, it becomes clear there’s much more than sexual tension at stake.

Enter Big Daddy and the cast of characters who consistently vie to secure a prime place in his orbit and a slice of his legacy.

I was spellbound that day, almost 25 years ago. Tom, a tortured soul, desperate to start a new life… left.  Yes, his mother was an ultra-manipulative wreck, trapped in her warped view of the past. Yes, his sister had an unnamed disability deeply intertwined with her mother’s dysfunctional controlling nature. Yes, he really needed a break and spent more time watching movies than was probably healthy. And yes, Tennessee Williams had all but told me Tom was going to go, but I was still shocked and heartbroken when he left. It was the truth, always there, but I couldn’t believe it. That was the spell–even though I had seen it coming, I never saw it coming.

With Maggie and Brick in the same room at the same time, but miles apart, the brilliance of Tennessee Williams–to tear open the souls of his characters and lay them bare before us, yet still have them surprise us–begins to unfold.

The two-hour resolution, set in Depinet’s gorgeous take on the fading splendor of a Delta plantation house on its way to ruin–replete with moss dripping from a magnificent staircase ascending to the heights of the theater–features a dysfunctional family’s fight to conceal Big Daddy’s terminal diagnosis and ensure their inheritance. In the meantime, the lie that he has been given a clean bill of health energizes Big Daddy to obliterate the remnants of his marriage to Big Momma, expose the dishonesty of his Son Gooper and his wife Sister Woman, and repair his relationship with his chosen heir Brick. As the lead mantle passes from Maggie to Big Daddy, DeCaro gives an unforgettable performance: at once fragile and utterly impenetrable, vicious bully and tender father, both cruel and loving. When Big Daddy unearths what he believes to be the source of Brick’s depression and alcoholism–his son’s repressed homosexual relationship with his best friend Skipper–Brick fights back by exposing the reality of Big Daddy’s condition. The resulting vision of DeCaro ascending the staircase as he launches into a tirade about the “mendacity” of his family and the cruelty of his terminal diagnosis would, alone, be worth the price of the ticket.

With the truth on the table, the illusion of normal family life explodes into a brutal fight for control of the 28,000-acre plantation and Big Daddy’s millions. As their true motivations are revealed–any hope for honesty dies in the blast. In a court now presided over by Big Mama–brilliantly played by Cindy Gold–Angelson’s Maggie takes back the lead in her own unforgettable, spellbinding final ploy for control.

In the Spring of 1955, Cat on a Hot Tin Roof opened in New York. Directed by Elia Kazan, and starring Burl Ives as Big Daddy and Barbara Bel Geddes as Maggie, the play was an immediate sensation. From Brooks Atkinson’s review in the New York Times, “Cat on a Hot Tin Roof is the work of a mature observer of men and women and a gifted craftsmen. To say that it is the drama of people who refuse to face the truth of life is to suggest a whole school of problem dramatists. But one of its greatest achievements is the honesty and simplicity of its craftsmanship. It seems not to have been written. It is the quintessence of life. It is the basic truth. Always a seeker of honesty in his writing, Mr. Williams has not only found a solid part of the truth but found a way to say it with complete honesty. It is not only part of the truth of life: it is the absolute truth of the theatre.”

Sixty-three years since the curtain rose on Tennessee Williams’ masterpiece, and twenty-four years since his Glass Menagerie showed me what a play could be, Marcia Milgrom Dodge’s impressive revival more than lives up to Atkinson’s review. Drury Lane’s Cat on a Hot Tin Roof reminds us of the power of a play and the spellbinding brilliance of a master craftsman when his script is in capable hands.