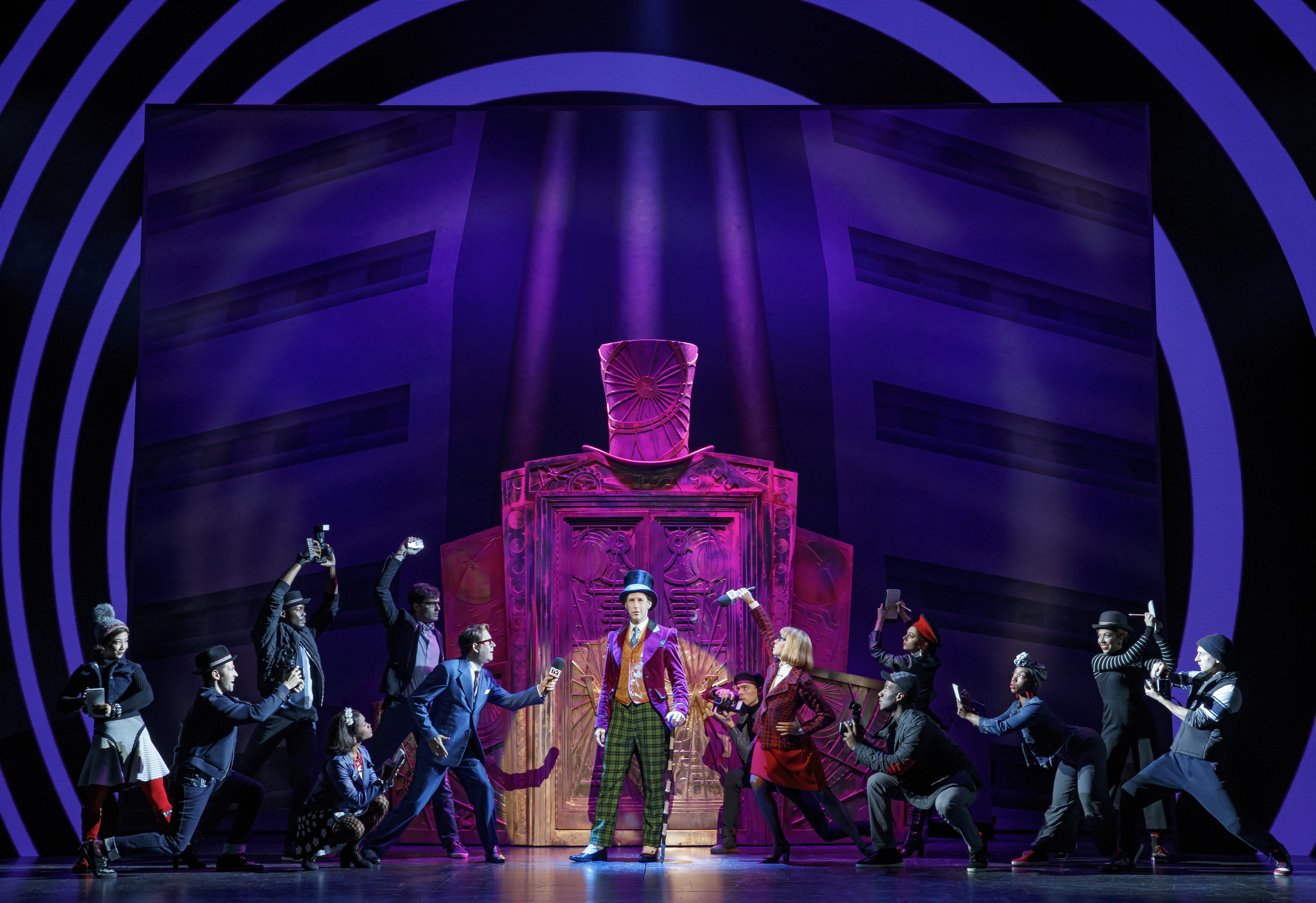 Chances are that if you are going to see Charlie and the Chocolate Factory, you are prepared to like it a lot. It’s based on the beloved Gene Wilder movie which in turn was based on a classic from Roald Dahl: of course you’ll love it. The many people with children at the opening night performance seemed enthralled, as well as most of the rest of the audience. And why not? It’s a journey into your imagination fueled by chocolate and it features two leading performers who do a wonderful job and Oompa Loompas; what’s not to love?

Answer: I don’t know, but I didn’t love it. Oh, I liked it fine, but it just all seemed so oddly distant and sterile. And it certainly was not the fault of the actor playing the mysterious Willy Wonka, Noah Weisberg, a very good performer who is, if anything, a bit too ingratiating. Dahl did write him to be a bit menacing, after all. But Weisberg does have fun with the series of ridiculous children Wonka is saddled with, all of whom (Augustus Gloop, Veruca Salt, Violet Beauregard and Mike Teavee) are there to make the too-perfect-already Charlie Bucket (played by three boys, the endearing Henry Boshart in this performance) seem even more angelic by comparison. (The actors portraying those doomed kids are all on point, especially Jessica Chen and Brynn Williams.) And Amanda Rose does gives a lovely performance as Charlie’s mother, the put-upon woman who has to feed his four live-in bedridden grandparents as well as her son on pennies a day (and who is as much of an angel as he is).

And it certainly wasn’t the fault of the ensemble playing those Oompa Loompas, whose appearances (choreographed by Joshua Bergasse) were a consistent and hilarious highlight. Nor was it the score by Marc Shaiman and Scott Wittman (plus a few songs from the movie). Several of the new songs, including “Strike That, Reverse it,” “It Must Be Believed to be Seen,” “Queen of Pop,” and the closing number, “The View From Here” deserve to become the kind of classics that “The Candy Man” already is. Maybe it was the sets by Mark Thompson. Though he hits the right note on the Bucket home and the candy shop, there is something about the rest of the sets that just doesn’t work for me. The cauldron-like machine that spits out Violet’s gum (or G.U.M. as the play has it) is just too silly looking to be menacing. The scale for the “good nuts” and “bad nuts” is almost unrecognizably flat. Everywhere in the magical chocolate factory there is an overuse of digital visuals, which really only work all that well in the “Mike Teavee” scene. Thompson hits again with a simple “glass elevator” at the end, but some of the digital effects even there are just underwhelming. If he had considered at all what a brilliant effect the puppetry of the Oompa Loompas is—live onstage—and remembered that the magic of theatre is that it is done live, perhaps that would have made a difference.

All I know is that I’d have given a lot to see this kind of magic done with practical sets and props, or at least if the magic had seemed practical. A trick at the beginning with a paper airplane is more wonderful than all of the digital sets combined. But none of this is to say that you won’t enjoy this play. In the end, though it might have been better in my imagination, it’s still the same story that we all love, and I suspect that will be enough for most viewers.

Charlie and the Chocolate Factory is now playing at the Oriental Theatre, 24 W Randolph, Chicago until Oct 21 . Check the website for specific dates, times, and tickets. Find more information about current plays on our Current Shows page and at theatreinchicago.com.