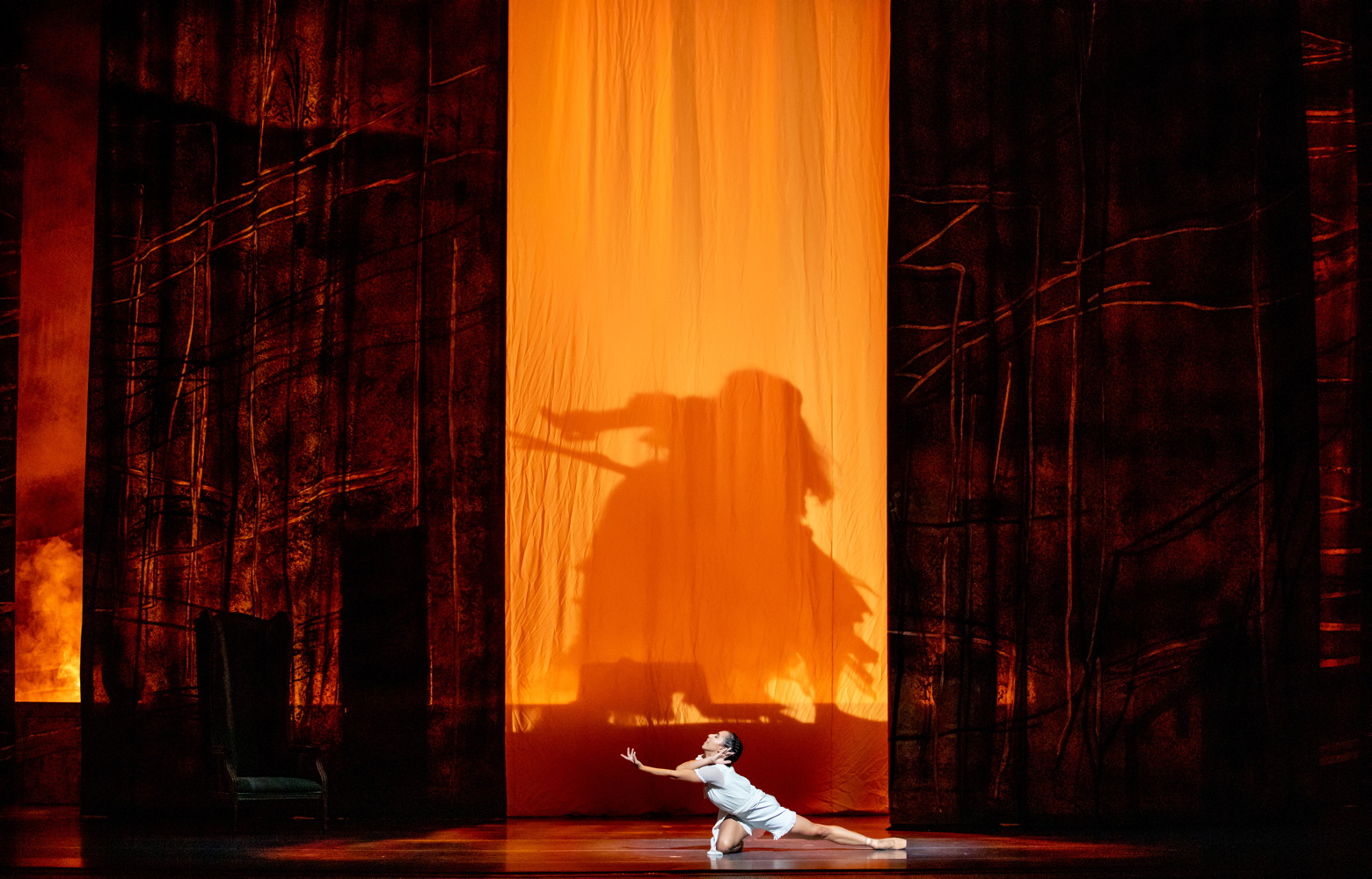 For two extraordinary hours on Wednesday evening, the Joffrey Ballet’s Chicago Premiere of Cathy Marston’s Jane Eyre drew the audience to the edge of their seats to bear witness to ballet’s potential to strip the human experience down to its most visceral base elements.

Family and loved ones lost too soon. Men who control, who torment and leave scars, who wound and are wounded, who offer help but always want something in return. Women who lead quiet and sometimes not-so-quiet lives of desperation, who stand in the way, who can’t or won’t help. And Jane–a deeply flawed heroine, a woman of fierce intelligence and determination, with a sliver of hope but limited means and opportunities–who tries to make a life for herself, to find something like love, to escape her demons.

As the critically acclaimed British choreographer stood center stage alongside the women of the Joffrey Ballet, poised to take their final bow amidst a standing ovation, the truth was clear. Cathy Marston and the Joffrey’s brilliant adaptation of Charlotte Bronte’s much-loved 19th-century Victorian classic takes a complicated story about a complicated woman in complicated times and, without a single line of dialogue, renders it flawlessly, with a sophistication that equals, if not surpasses, the original. With its beauty and severity, passion and precision, and, above all, with its unrelenting intensity and complexity, Jane Eyre is narrative ballet at a whole new level.

From the ballet’s first moments–as Jane is chased to exhaustion by a swirling chorus of her male oppressors–Marston’s choreography and Amanda Assucena’s mesmerizing performance masterfully capture the emotional depth, intelligence, and anxiety of Bronte’s complex heroine. Backed by a Joffrey ensemble that delivers with extraordinary feeling and their signature brand of precision—including the chorus of “D-Men,” a swarm of Jane’s tormentors danced by Yoshihisa Arai, Edson Barbosa, Jose Pablo Castro Cuevas, Fernando Duarte, Stefan Goncalvez, Hansol Jeong, Graham Maverick, Xavier Nunez, Aaron Renteria, and Temur Suluashvili, and a host of strong supporting characters like April Daly, who plays Mrs. Reed, Jane’s uncaring and dismissive aunt, and Yuka Iwai and Valeria Chakina who, along with Xavier Nunez, play Jane’s tormenting cousins—Assucena’s Jane navigates her way through the all-too-familiar stifling, punishing oppression of a sexist world haunted by demons.

The ballet opens at a breakneck pace, set to Phillip Feeny’s breathtaking score featuring original works interwoven with music by Fanny Mendelssohn and Franz Schubert. Maestro Scott Speck and the Chicago Philharmonic pick up right where they left off last season with a stellar performance that delivers the dramatic score with vibrant, resonant energy to fuel the intensity of the ballet.

We meet Jane in the middle of her story, with her escape from Thornfield Hall and her tortured flight across the English countryside. To her horror, Jane discovers that Edward Rochester–her love interest, intellectual equal, and ticket to a better life–is already married to a crazy woman in red, Bertha Mason, whom he has locked in the attic. Crushed by fear, anger, anxiety, and hunger, Jane breaks down and collapses in a marsh. Here, St. John Rivers–danced more than ably by Edson Barbosa–finds her and brings her home to recover. From her raised platform upstage, Jane’s fever dream-flashback life story begins. With a minimalist set and lighting design, brilliantly conceived by Patrick Kinmonth and Brad Fields to give plenty of space for frantic energy and then explode into flames and chaos at the points of greatest drama, the first scenes of young Jane’s story are told downstage in a series of memories.

This memory ballet begins with young Jane, played by Yumi Kanazawa, at her parents’ burial. From the funeral to the brief period she spends living with her wealthy aunt and vicious cousins to her time at a school for orphans, Kanazawa perfectly captures Jane’s pain and determination. As she struggles to maintain her identity in the face of Reverend Brocklehurst’s (Temur Suluashvili) demands for conformity, Jane meets Helen Burns–danced with grace and sensitivity by Brooke Linford. But Helen can only offer a momentary respite from Jane’s suffering before she too succumbs to consumption. Always fighting and surviving, beaten down but not out, Kanazawa dances Jane through these early moments with extraordinary energy and emotional depth, delivering the role to Assucena as she begins her time with Rochester as a governess in his employ at Thornfield.

Danced by Greig Matthews, Rochester is every bit as complicated as Jane. He is, by turns, aloof and alluring, dismissive and inviting, and always sharp and cool. Rochester believes he can control Jane as he seems to control everything else at Thornfield. When she’s close, he flicks her away with the subtlest gesture. When she is further away and seems about to leave him, he catches her with a boundary formed by his outstretched leg. But, though he is clearly uncertain, and there is a crazy woman in red lurking in the background, his affection for Jane and his growing understanding that she is his intellectual equal becomes clear.

Though Rochester and Jane’s relationship is obviously fraught with peril, Assucena and Matthews’s chemistry is extraordinary. Their styles mesh perfectly with a connection that pulses through their series of duets and resonates with the delicious tension of a man and woman who want to be together but can’t figure out how to make it work.

Lurking upstage, menacing and foreboding, forever between Jane and Rochester, is Christine Rocas in her role as the wild and utterly unhinged Bertha Mason, the crazed and violent wife Rochester has locked away. Like Assucena and Matthews, Rocas is perfect in her role. She sets fire to Rochester’s bed, attacks her attendant, Grace Poole (Dara Holmes), and dances with reckless abandon as she throws herself at Rochester while trying to gouge his eyes out.

Along with Assucena, Matthews, Barbosa, and Rocas, Jane Eyre features a host of strong performances from the Joffrey ensemble, including Cara Marie Gary as the exuberant Adele, Jane’s charge as governess, and Jeraldine Mendoza, who threatens to steal both the ballet and Rochester in her role as the sultry socialite Blanche Ingram.

Following a string of artistically groundbreaking, critically lauded box office hits like Christopher Wheeldon’s Swan Lake and The Nutcracker, not to mention the successful adaptations of Anna Karenina and Don Quixote, there was every reason to believe that Artistic Director Ashley Wheater and the Joffrey’s decision to open the season with Jane Eyre was a strong choice. But with an extraordinary adaptation of Charlotte Bronte’s 19th-century novel that feels more relevant now than ever, it’s clear Wheater’s choice was genius.

In complicated times, Jane Eyre is the right ballet for the moment. Jane is a hero of sorts, but she’s by no means perfect. Both she and Rochester—not to mention every other character in the ballet—are deeply flawed. There are no defining moments, no loud crashes, no triumphant, joyful finale. And the ending? Suffice to say, there are no easy answers: just as Jane is a hero of sorts, the resolution is a resolution of sorts. But great art gives no easy answers, and Jane Eyre is most definitely great art. With her harsh beauty and complexity, she dares us to think deeply, to search for meaning through the passion and struggle, and to find our own resolution… of sorts.

Jane Eyre is a Joffrey Ballet Chicago production now playing at the Auditorium Theatre at 50 East Ida B. Wells Drive, Chicago from Oct 16 to 27. Check the website for specific dates, times, and tickets. Find more information about current plays in our front page recs and at theatreinchicago.com.