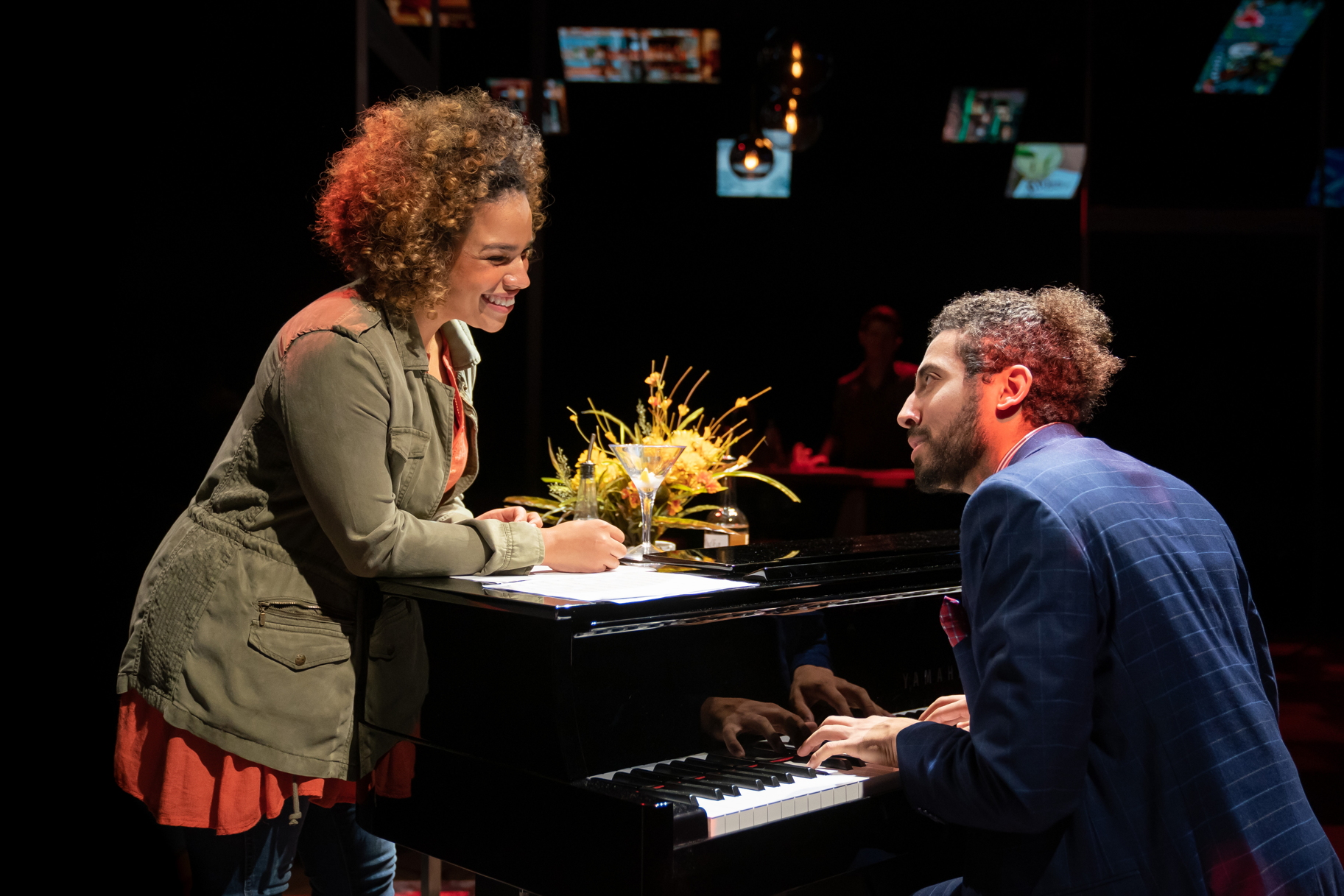 Some musicals are meant as whimsical fun, like the thoroughly enjoyable Head Over Heels now playing at Theater Wit. Some are timeless romantic comedies, like the Goodman’s new production of The Music Man. Some, though, seek not only to entertain but to enlighten audiences about social issues they may not have considered much, if at all. Next to Normal, which recently had a run at Writers Theatre, is that kind of play. So is Daniel Zaitchik’s Darling Grenadine, now playing at Marriott Theatre in Lincolnshire. Both musicals tackle serious subjects, debilitating diseases that are considerably misunderstood, with Normal’s foray into bipolar disorder and schizophrenia and Grenadine’s focus on addiction. And both musicals explore how these conditions affect not only those who suffer from them but their friends and families as well. But while Next to Normal is a Pulitzer Prize-winning show that carefully paints those struggles through a wide variety of musical themes and vivid characters, Darling Grenadine, at least here in its first full production, relies almost entirely on its smooth, jazzy score and our ability to forge connections with its two leads.

Brilliantly directed by Jeff Award winner Aaron Thielen, Darling Grenadine focuses on the life of Harry (Heath Saunders), a composer whose adult life has been plagued by alcoholism, an addiction that he cannot control. When we first meet him, however, he seems just like anyone else: apparently a social drinker rather than a drunk. He certainly seems this way to Louise (Katherine Thomas), an actress with whom he has become infatuated after seeing her in a musical called Paradise (of which we see select scenes throughout the night). To her, Harry seems perfectly nice, if a bit obsessive (he’s been to see her perform more times than he can even remember). His best friend, bar-owner Paul (Nick Cosgrove), however, knows the truth, though he doesn’t stop Harry from drinking when he is there to play the piano. Paul and Harry have grown up together and consider each other to be brothers, but there is nothing in their friendship that is able to allow Paul to stop his friend from over-indulging if he decides he needs to drink.

In addition to these three characters, Allison Sill and Brandon Springman play all of the female and male minor roles, respectively, and there is a wonderful puppet dog (also named Paul) built and controlled by Phillip Huber and voiced by the trumpet of Mike Nappi. Between them, they make the dog seem utterly real and capable of all sorts of canine looks and expressions.

Zaitchik, who not only wrote the book but also composed all of the songs, has said that his intention in this play is to take characters that are usually pretty much tropes (the up-and-coming actress, the charismatic composer, the wise-cracking bartender) and make them more real by placing them in full three-dimensional lives with all of the requisite messiness attached. And though the characters do, for the most part, seem real—especially Thomas’s winningly sweet in-denial Louise—there is not really really opportunity to delve deeply enough into the central issue and explore the myriad ways in which alcoholism can seep insidiously into and destroy lives. Saunders is game here, his smooth as silk jazz voice masking the internal struggle as Harry goes about winning Louise’s affections, but that mask also prevents us from seeing into his problem, leaving the actor with too-sudden shifts into a drunken persona that, while they may accurately reflect the character of the high-functioning alcoholic, don’t play very clearly onstage. Zaitchik relies on small moments like Harry adding booze to his morning coffee to signify the addiction, and while it is a good scene it is not really enough.

And then there is that jazzy score. Though it is unlikely that you’ll leave the theatre remembering much of it specifically, it is indeed lovely in its structure, recalling shows like City of Angels. However, it doesn’t really give Saunders much chance for variety in his singing style; he’s always so low-key and steady that any potential for disruptive behavior remains largely obscured until the moments of its expression, which come on fairly suddenly and ultimately don’t rise to the level of the warnings that Paul (the human) gives to Louise about him.

I really want to like Darling Grenadine a lot. The singing is gorgeous. The performances are solid. The topic is interesting and important. Jeffrey D. Kmiec’s somewhat busy but highly inventive set allows for mood, setting and seasonal changes to be reflected in the myriad video panels hung above. And, most of all, this is original material. It is not, as we have come to see so often, derivative of other sources; Zaitchik created this from nothing, and we need more musicals like that in an era of jukebox shows and adaptations of popular films. I just think it is still a work in progress, which makes sense, and needs some time to find itself fully. Still, it is inventive and well worth seeking out; especially if you are tired of the same secondhand formulas we see too often elsewhere.

Darling Grenadine is now playing at Marriott Theatre, 10 Marriott Dr, Lincolnshire through August 18. Check the website for specific dates, times, and tickets. Find more information about current plays in our front page recs and at theatreinchicago.com.