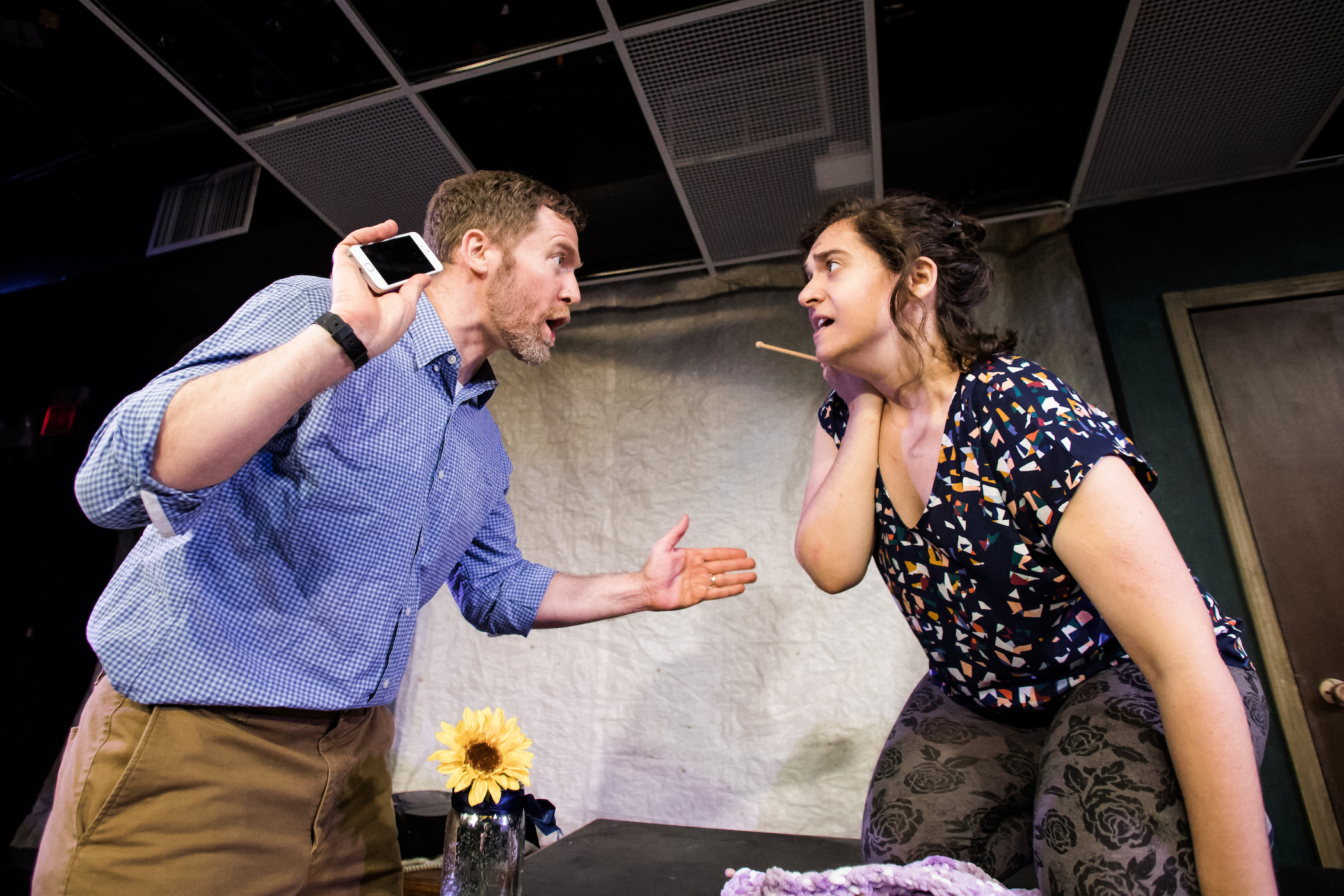 It’s not often that I am challenged as much at the theatre as I was in attending the Neo-Futurists’ new play, Lily Mooney’s Empty Threats, starring Mooney and directed by Krissy Vanderwarker. The play, a full-length feature from the Neo-Futurists instead of the explosion of very short plays their shows usually consist of, explores the very boundaries of reality and fiction in a production that is a sort of marriage between experimental theatre and performance art. It is one of the most provocative theatrical experiences I’ve had this year.

Mooney’s play begins with its only other actor, Jared Fernley, who plays an English professor named Victor, at his desk on a stage surrounded by a plastic tarp. The distorted vision we have of the actor at the play’s opening seems to be a clue that our sense of reality will be questioned all night long. At that, Mooney does not let us down. Victor gradually stops what he has been doing and drops his pants in an attempt to masturbate, one that is interrupted by the sudden appearance of the playwright herself, who tears the plastic down (clearing our vision) and declares that he has “failed her.” Naturally he assumes she means in a class, which confuses him because he does not recall ever seeing the woman calling herself “Pearl” before. It does not take long until “Pearl’s” first of many outlandish actions—taking his seat as if it were her own (because in a way it is)—and that starts the play off and running. Before it is over, each player will have been bound with ropes, one will be “shot” with a finger gun, and, the playwright promises, one will die.

Empty Threats is an act of illusion from beginning to end. Its magical elements are emphasized in tricks that “Pearl” plays as well as in her godlike (or playwright-like) control over her partner. Part of this is pure performance art as Mooney repeatedly breaks the fourth wall for poetic recollections of her youth and knowing nods to the audience she knows is present even if Victor does not. Part of it, though, is a comic thriller in a traditional sense which the insane person has entered a private space and wreaks havoc. Fernley is excellent as the put-upon Victor, whose grip on what is real slowly slips away as the play progresses. His character tries everything from pleading to logical persuasion to humoring to violent anger but cannot rid himself of this unwanted person. Meanwhile, Mooney’s playwright, too, is becoming frustrated as her attempt to get through to Victor continues to fail. She says he has “failed” her, and the insinuation is that he failed by not becoming a fully rounded character for her; now he is failing her again by not playing out the scene she has constructed properly.

This is a play that is designed to be confrontational. It’s not merely the characters confronting each other, though; it’s the playwright confronting her audience. At first “Pearl” says that she is a friend of the playwright, but that is as much a ruse as her name. Later she acknowledges that she is the playwright, and she puts herself and Fernley through some unusual moments. One key sequence, acknowledging the similarity between this and a certain David Mamet play, has her suddenly grabbing a knitting needle and holding it to her own neck, crouching on the desk and shouting “Oleanna!” until Victor calms her down. The play also owes a conscious debt to Mary Shelley’s Frankenstein, especially the introduction she penned for the novel. These overt connections are designed to add further layers to Victor’s evening, which is already crazy. How does this stranger know so much about him? Why is she here? How does a finger gun cause so much blood? The scene with the gunshot blurs the lines between reality and fiction about as much as they can be blurred, as a clearly fictional “gun” causes very real damage, but the playwright is far from through.

Even at the play’s end, Mooney continues to blur those lines. After what appears to be the final scene, she tacks on a sequence in which both actors play themselves and she tells a story about illusions that, though she purports it to be real, may or may not have happened. The result of it is an audience left to ponder the difference between what is and what is made up as much as Victor does upon discovering that his “office” is actually a stage. Props to scenic designer Grant Sabin for that. John Kelly’s lights, which feature (among other things) fluorescents—the harshest and most unforgiving light of all—is also pretty genius, as is Andrew Tham’s sound design. Vanderwarker keeps the action moving along, even during scene changes—a further breakdown of the lines between fact and fiction.

Victor’s discovery breaks him, as I’m sure such a discovery would break any of us, but what exactly is reality anyway? That is clearly (as Victor points out) a question for a philosophy class (and in fact I recall writing a ten-page paper back in college on the difference between Truth and Reality). I am currently wearing a t-shirt that holds a Mark Twain quotation:

It’s no wonder that truth is stranger than fiction; fiction has to make sense.

Lily Mooney has created a fiction that is stranger than truth while allowing truth to break into it. It’s a complex conundrum of an evening, and I found myself enjoying the game completely.