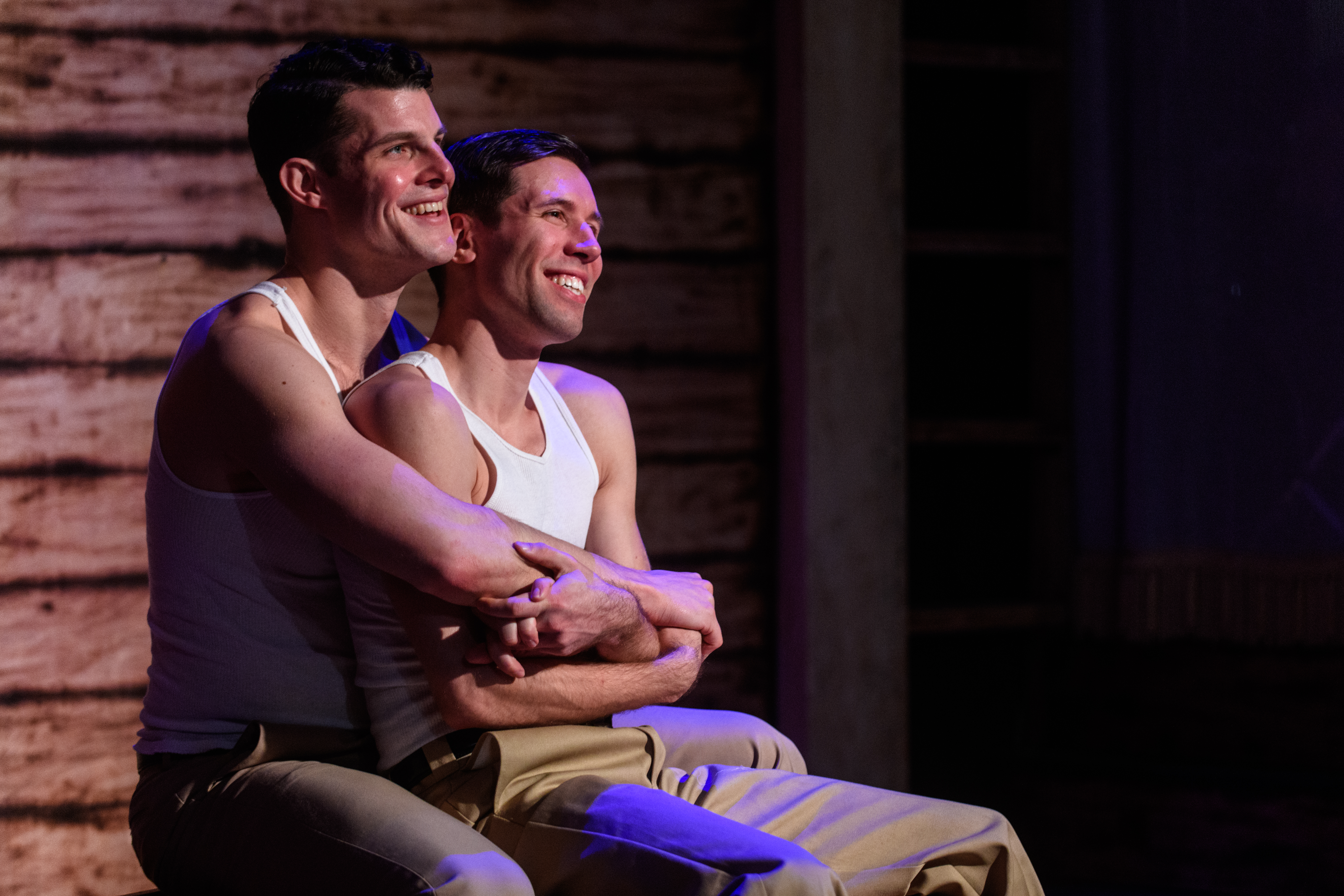 Pride Arts Center may not be the first name on your lips when trying to figure out where to find one of the best musicals in Chicago, but that’s exactly what you’ll find if you head on out to see Yank!, now playing at the PAC’s Broadway Theatre, a former speakeasy whose old character all but disappears behind Roger Wykes’ tri-level set: a wooden Everyplace backing scenes set at Fort Bliss as well as on the front and aboard a ship (where the set works best). The simplicity of the set evokes a simpler time when things seemed a lot easier to understand, but the single slide in the back wall reminds us that there are always hidden things, even where life seems the most solid. The “hidden thing” in this play is Stu (Matthew Huston), a young gay man who finds himself training as a member of Charlie Company of the 81st Infantry Division. Of course, he doesn’t fit there at all, and from the beginning he is compelled to hide who he is from everyone, his solitude making him the butt of everyone’s jokes except for Mitch (William Dwyer), a popular, handsome jock who happens to be a closeted gay man. Mitch’s acceptance helps the rest of the company to accept Stu, though they do nickname him “Light Loafers.”

Stu also is compelled to keep a journal of everything that happens to him, and that is the nature of the framing device for this tale. A 2018 man, played also by Huston, finds the journal in a junk shop and wonders about the life of the man who wrote it. What we watch is what was in the journal. That it was found in a junk shop does not bode well for the story’s protagonist, and the audience is clued in on this from the start. Indeed, we see the way the army treats its gay contingent: if they can be ignored, they are ignored; if not, well…to borrow from another musical, “ya got trouble, my friends.” Stu manages to survive in the early part of his tour of duty because he meets a gay photographer named Artie (John Marshall, Jr.) who recruits him to write for Yank magazine, the soldiers’ favorite reading material. And they trip the gay fantastic for quite a time together. But Stu is deeply in love with Mitch, who kissed him once on the way to Japan and, although rejecting him after that, remains entrenched in his mind. When he hears from Czechowski (Will Kazda), one of his Company C buddies, that Mitch is in a lot of emotional pain and that the 81st is going to be close by, he finagles an assignment to cover them, reuniting him with the whole crew and setting the stage for a powerful, though dark, final act. Keeping everything lighter are interludes of the men listening to various famous singers (all played by Molly LeCaptain, who also plays McArthur’s lesbian secretary) on the radio. LeCaptain’s powerful vocals (and Uriel Gomez’s costumes and wigs) create multiple different characters, all of whom the woman-starved enlisted men swoon over.

Director David Zak does some inventive work here to take advantage of Wykes’ set and to take care of the disadvantages of the rather small Broadway stage with its awkward one upstage, one downstage entrances. The shower scene in the first act is both perfect and funny. The great “secret gays in the military” scenes he and choreographer Jenna Schoppe have conjured work beautifully as does pretty much any scene with Marshall in it. (Marshall and Huston share a tap number that is just dynamite.) Several scenes set on the upper level help to break up the space. And the performances Zak gets from his actors, especially Dwyer, are impressive. Dwyer has the closeted gay guy down pat: you want to dislike him because he’s the character who can’t be true to himself, but you just can’t. Especially not with Tennessee (Nate Strain) around to fill the role of villain very nicely.

Period stories of gay men struggling for acceptance are plentiful enough, but this being a musical adds another layer. The songs in this show (composed by Joseph Zellnik, brother of book writer David Zellnik) are really very good. Some (the radio singer songs) sound just like something that might have been heard in 1945. The narrative songs have a more contemporary feel, which makes sense given that the frame here is a contemporary man hearing this story in his head. And Robert Ollis and his five-piece orchestra sound great in all of them.

In the end, this ensemble just entertains the heck out of its audience. Performances are passionate, funny, and powerful, and the sincerity of Huston’s performance is completely winning. In fact, the entire ensemble is completely winning: this is a show that Pride Arts Center should be proud of, and it’s easily one of the finest musicals in Chicago right now.