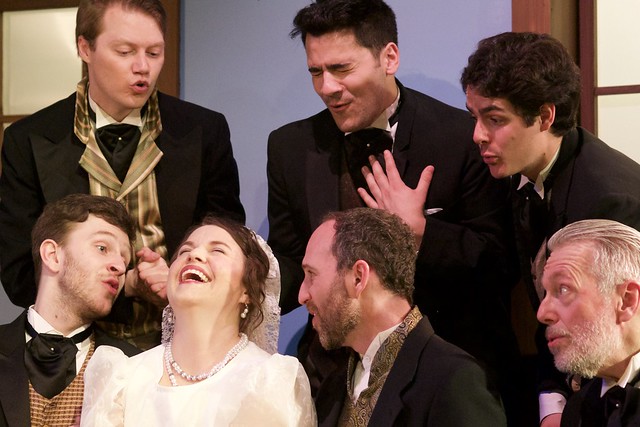 Two Days in Court, City Lit Theater’s final production of the 2018-2019 season, consists of two classic short pieces about trials: “The Devil and Daniel Webster” by Stephen Vincent Benet and “Trial By Jury,” a very silly operetta from Gilbert and Sullivan. Directed by City Lit Artistic Director Terry McCabe and featuring an exuberant repertory cast, these two rarely-seen works come together in a 90-minute show that may not be revelatory but is certainly entertaining.

The first production, which infuses a couple of songs from Benet’s opera version of the short story/play, concerns a NH farmer named Jabez Stone (Nate Strain) whose wedding celebration is cut short when the devil himself (Lee Wichman) comes to collect an old debt. When it becomes clear what is happening, Daniel Webster (Bill Chamberlain, playing a fictionalized version of the famous NH lawyer), who is a guest at the party, steps in to challenge Old Scratch in a trial for Stone’s soul. The jury in the trial, selected by the devil, are some of the worst miscreants in history, and the thing seems rigged for Webster and Stone to lose, but no one should ever count out Daniel Webster’s oratorical skills.

The play is firmly in the realm of fantasy and has no pretensions to being great drama, but it is fun nonetheless to watch Webster strut his stuff, and Chamberlain invests the role with the kind of gravitas that ought to accompany someone of his character’s stature. For their parts, Wichman is an understated Old Scratch (though his scene with the fiddle is perfect) and Strain is sympathetic as a man whose youthful decision has come home to roost. Laura Resinger’s performance is genuine and heartfelt as Stone’s stridently supportive wife, and the entire highly animated ensemble enjoy themselves working with Benet’s script, though some of it has not aged well.

The second part of the show is utterly ridiculous by design: “Trial By Jury” is the satirical tale of a man (Jimmy Hogan) who is being sued by his ex-fiancée (Sarah Beth Tanner) for breach of promise. The case is tried in the courtroom of an esteemed judge (Kingsley Day, singing the mandatory G&S baritone patter) in front of a highly biased jury. The plot of this one act defies summation, but the entire cast handles both the extreme characterizations and the music (directed by Daniel Robinson) beautifully in a high-energy play that rarely slows down. Gilbert and Sullivan are, of course, known for being comical and absurd, and this short play is no exception. It doesn’t seek to make any sense; it’s all for fun. I often found myself paying attention to the jury, whose outrageous actions and facial expressions (certainly aided by McCabe) are a hoot. But there is enough going on on the small stage to hold anyone’s attention.

Two Days in Court, with its high-spirited cast and clever direction, offers a bit of a springtime lark to theatregoers. It isn’t at all serious and doesn’t try for any heavy meanings, but it’s good fun and will leave you smiling. Sometimes that’s exactly what you need.

Two Days in Court is a City Lit production now playing at the Edgewater Presbyterian Church, 1020 W Bryn Mawr, Chicago, through May 26. Check the website for specific dates, times, and tickets. Find more information about current plays in our front page recs and at theatreinchicago.com.