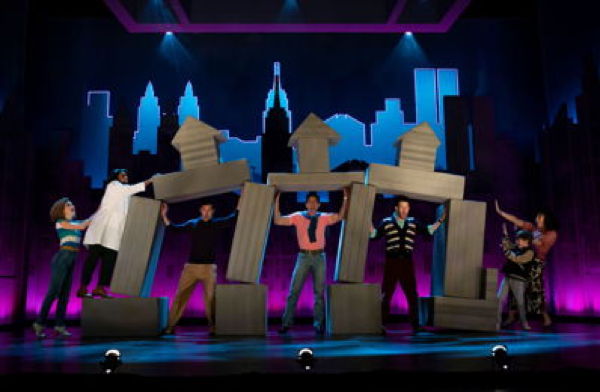 “Love is love is love,” proclaim T-shirts you will undoubtedly see in the crowd at the Chicago Pride Parade at the end of June, and you’ll be hard pressed to find a better visualization of that sentiment than William Finn and James Lapine’s early 90s musical Falsettos. In the course of its two and a half hours, it shows that love, while not always a straight road to travel, is worthwhile in all of its forms.

Originally two one-act musicals (“March of the Falsettos” and “Falsettoland”), the two together in this Tony Award-winning show tell a complex story of a family torn apart—and reconnected—by love. The 2015 Tony-nominated revival is reaching Chicago on its national tour, and, with director Lapine still at the helm of an excellent cast and production team, it feels and sounds almost exactly like it did on Broadway.

At the beginning, we are introduced to a group of neurotic New York Jews who are “bitching” about where life has brought them. Marvin (Max Von Essen) has left his wife Trina (Eden Espinosa) for another man, but he worries that his relationship with Whizzer (Nick Adams) isn’t anything more than the “thrill of first love.” Marvin and Trina’s son Jason (Thatcher Jacobs at the opening night performance) is confused by his newly awkward extended family, worrying that if his dad is gay then he will be as well. And Marvin’s psychiatrist Mendel (Nick Blaemire) is sick to death of the endless line of young people with petty problems who come through his office. It isn’t long before Marvin gets Mendel to take on both Trina and Jason as clients, which results in the psychiatrist falling in love with Marvin’s ex-wife. Act Two, which picks up two years after Act One,  introduces two more characters, the lesbians who live next door, Dr. Charlotte (Bryonha Marie Parham) and Cordelia (Audrey Cardwell). Somehow, against all odds, all of these people form bonds with each other.

The gay and lesbian elements of the play, which in 1992 seemed a bit risqué, today play as relationships, nothing more, and that is a healthy sign of how far the nation has come (despite the pushback of the Trump era) in its acceptance of non-heterosexual love. It’s also exactly the way the authors wanted it to be seen. Finn’s book and Lapine’s songs focus on the complications of love, not on the sexuality of the lovers. All of the adults, for instance, love young Jason and would do anything for him (including coming out to watch him and a group of “Jewish boys who cannot play baseball play baseball”). Trina even, despite herself, comes to care about Whizzer, which she realizes late in the play when he becomes sick with the mysterious disease that would become known as AIDS. The two gay couples even have a song (“Unlikely Lovers”) about the bonds among them.

This is a show that allows its actors the opportunity to shine, and no one takes advantage of it more than Espinosa, whose several numbers include “I’m Breaking Down,” a big bold song in which Trina shows herself falling apart after her divorce, and the more contemplative “Holding to the Ground,” in which she tries to maintain her hard-won control in the face of more life changes. Espinosa sells both the over-the-top number and the quieter one brilliantly. Equally impressive are Adam’s powerful “You’ve Got to Die Sometime” as Whizzer realizes his fate and Von Essen’s emotional “What Would I Do?” in the face of his lover’s death.

Falsettos, at times broadly comical and at other times powerfully dramatic, shows us life as it is lived and underscores the idea that, gay or straight or platonic, love is the “most beautiful thing” in the world. It is certainly a force to be reckoned with that has a life of its own and does not always correspond to expectations. Still, as many twists and turns as it may place in our way, it remains, if I may quote the Beatles, “all you need.”

Falsettos is now playing at the James M Nederlander Theatre, 24 W. Randolph St, Chicago through June 9. Check the website for specific dates, times, and tickets. Find more information about current plays in our front page recs and at theatreinchicago.com.