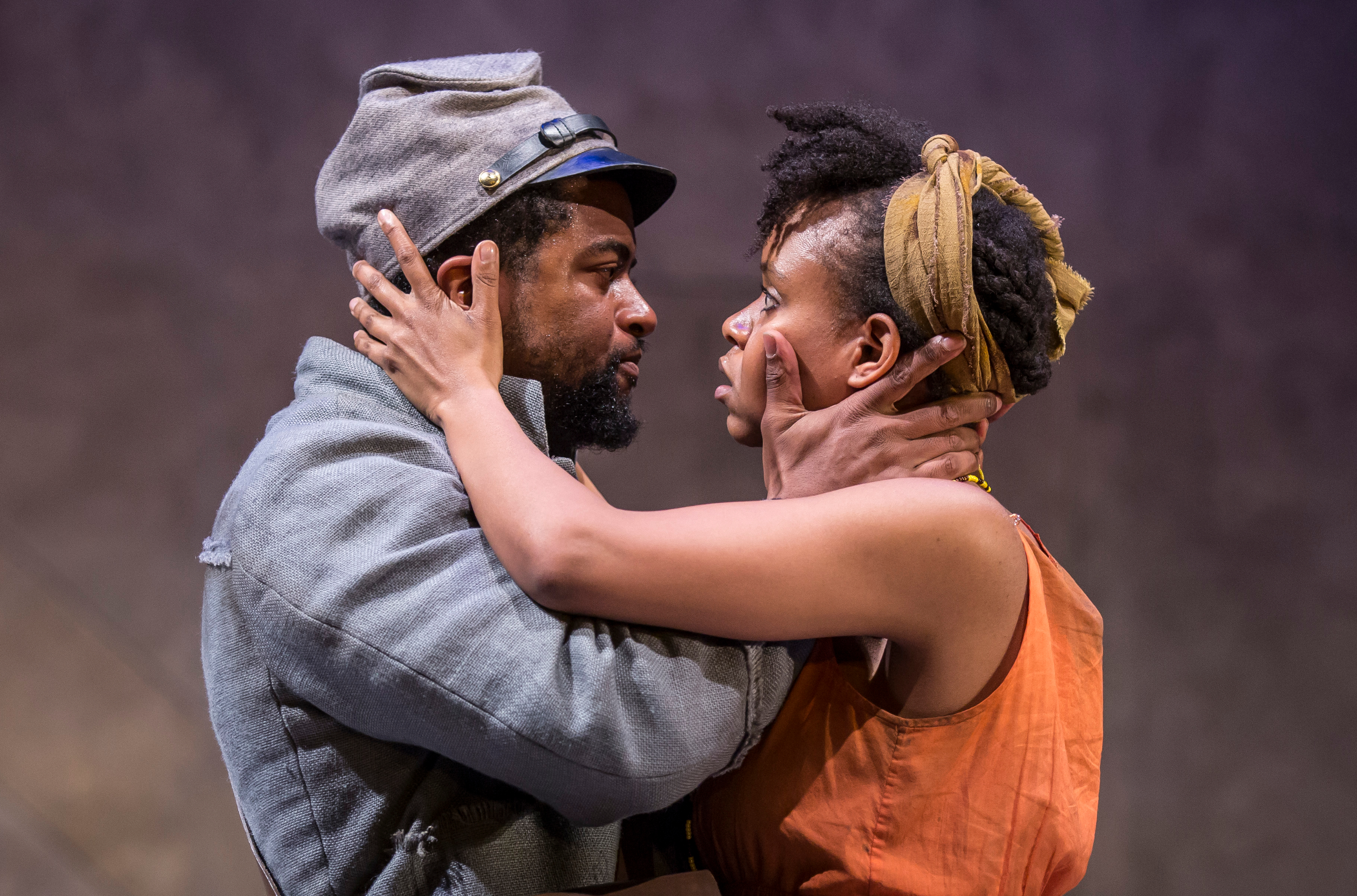 At the start of Pulitzer Prize-winning playwright Suzan-Lori Parks’ 2014 drama Father Comes Home From the Wars, Parts 1, 2, & 3, now playing in its Chicago premiere at the Goodman Theatre, a singer (Melody Angel) enters with a guitar and says to the audience, “So you thought you were at the Goodman?” The line gets a laugh, but the fact is that, though we are at the Goodman, she and the playwright are about to send us on a journey that will have us questioning ourselves. After 12 Years a Slave and so many other deadly serious films about it, can a 21st Century audience laugh at a play about slavery? Father Comes Home pulls us away from the safety of our seats into a semi-mythical version of the Civil War, one patterned loosely after Homer’s The Odyssey and populated by two Greek choruses of slaves, a protagonist named Hero, and a talking dog. Hero (Kamal Angelo Bolden) is not a hero in any way but the Greek tragic version of the word. From the start of Part 1 of this three-hour-fifteen-minute play (called “A Measure of a Man”), he is a bit of an enigma. In fact, the slave chorus at the start is taking bets on his next move. He has been asked by his owner to accompany him to the War—on the Confederate side, of course—and promised freedom if he goes. Will he or won’t he? In fact, should he? He has a wife, Penny (Aimé Donna Kelly), and a lot of goodwill on the farm, and he is being asked to leave it behind to fight in a war against the side he believes in. The first part of this play devotes itself to his indecisiveness on the matter, a key part of his character’s tragic flaw. (Ironically, later on in the play his biggest mistake will be due to a decision he does make, but we’ll leave that.)

The key point in the play is freedom. What does it even mean to someone who has been a slave all of his life? Pondering it, Hero calculates that, right now, he is worth about $800 to his owner, the Colonel (William Dick). Were he to become free, what would be his worth? If it cannot be counted, is it even real? Also, if freedom means that white men would have no qualms about harassing, beating, or even killing him—which they would never do now out of deference to his owner—what would be its worth? Hero believes in the Holy Grail of freedom, but does not ever really understand what it is. In Part 2 (called “A Battle in the Wilderness”), he is again offered his freedom, and this time the prognosis is more immediate: if he leaves the Colonel while he has a chance, he can actually join the Union Army and be truly free. Hero, though, remains indecisive: he simply can’t do it. It would violate some innate sense of who he is; it would be “stealing” himself from his owner. Many times in this play there is an echo of a concept about how a man can “misplace himself.” Hero misplaces himself at practically every step, including the post-Emancipation Proclamation Part 3 (“The Union of My Confederate Parts”). In some ways, this part is a reflection of Part 1: Hero begins as a hero and, due to his own actions, alienates his friends. In Part 3 he has changed his name to Ulysses, fitting for someone returning home after being away for a long time. (He also is reacquainted with his dog, a younger and much more energetic version of Argos in The Odyssey, whose dialogue is both knowing and hilarious—one of Parks’ best conceits.)

Through all of this, Angel’s powerful voice and her guitar act as a kind of poetic guide. She interacts with the characters, even manipulates the action a couple of times like the Stage Manager in Our Town moving from one scene to another. But mostly she is watching from the wings as themes she has brought up are acted out. Bolden, meanwhile, is quietly giving one of the year’s most powerful performances. One of his best moments is that indecision in Part 2: he says nothing at all, but his face speaks volumes and his entire body becomes so expressive that there is no doubt what his thoughts are. It truly is a masterful job of acting. Other fine performances here come from Kelly, whose desperate and loving wife proves that she is not quite as patient as Odysseus’s Penelope; Ernest Perry, Jr. as The Oldest Old Man, Hero’s father figure offering him advice in Part 1; BrittneyLove Smith as the dog, easily the front runner for Best Performance As a Non-Human for her sympathetic, hilarious take on man’s best friend; and Jaime Lincoln Smith as Homer, Hero’s erstwhile friend and current antagonist. Also deserving special mention are Dick, whose slave-owning, braggadocious Colonel is simultaneously playful and menacing; and Demetrios Troy, a captured soldier whose seriously wounded leg affords him the opportunity to play “pain” more realistically than I ever need to see again. (Seriously, I winced at times, cringing for him.) But even as I single out these performances I must acknowledge that, top to bottom, this is one of the finest ensembles I’ve seen in a long time, and both slave choruses (one in prison orange and one draped in flag-patterns to highlight their collective yearning for freedom) work wonderfully.

Director Niegel Smith has more than enough balls to juggle in this production, both in tone and in characters, and the fact that it all holds together so well is a tribute to both Parks’ brilliant script and Smith’s steady hand in directing. Courtney O’Neill’s set design incorporates the Confederate Stars and Bars so that we can’t ever forget the play’s focus and what hangs in the balance…as if such a thing were possible. Keith Parham’s lighting and Justin Ellington’s sound design and original music are perfect: this is a beautiful play as well as a powerful one.

Freedom is a concept for which people have fought and died for centuries, and it has rarely meant as much as it did in reference to American slavery. Parks’ take on this outrageous institution is both unusual and provocative, and the first three parts (of a planned nine) of Father Comes Home make for compelling theatre. And don’t fear its length: I never for a moment felt that it was getting dull or too long. It’s a funny, dramatic, poignant and painful look at an America gone sadly wrong, and the fact that it resonates so well today says volumes about how we are as a country in 2018.

Father Comes Home From the Wars is a Goodman Theatre production now playing at Goodman Theatre, 170 N. Dearborn Ave, Chicago, until June 24. Performance times may vary; check the website at Goodman Theatre. Find more information about current plays on our Current Shows page and at theatreinchicago.com.