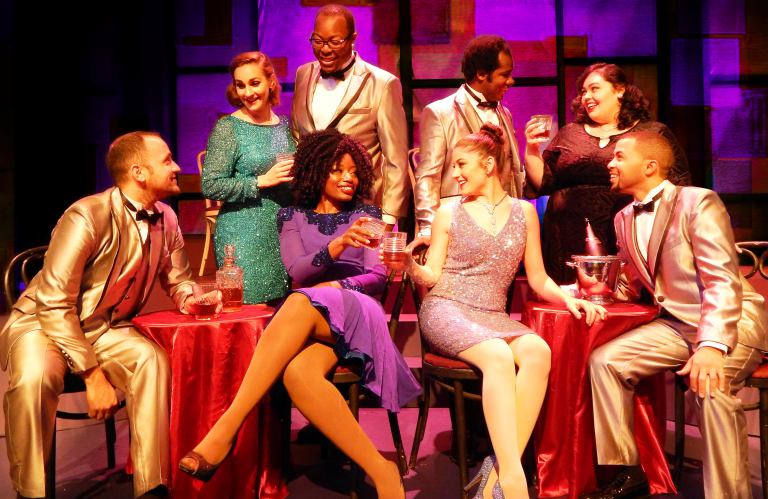 Ok, we never do meet anyone named Smokey Joe. We are never in his cafe or, for that matter, anyone else’s. In addition, there is neither plot nor dialogue in this musical revue based on the title of one of their songs.

NONETHELESS — this is a terrific theatrical experience. If this talented cast sang lyrics from a telephone book — or a dictionary — they could make the experience memorable. Certainly, they do justice to the work of lyricist Jerry Leiber and composer Mike Stoller, juxtaposing song after song to create a wealth of memory where the audience can provide the imaginative links.

Perhaps Smokey Joe is intended as mythical, looking down at the world that surrounded his hangout. By remaining nameless, all the neighborhood’s diverse characters become universal. The first of Leiber and Strollers 39 songs — aptly titled Neighborhood — sets the stage for all the follows.  Four attractive and energetic men matched by their female counterparts set up an evening of recollection and nostalgia.  We see when they were young, when they succeeded in love and when they failed. They pay tribute to Broadway, Rock and Roll, Rhythm and Blues and Spanish Harlem. They recall such memorable characters as Little Egypt and Charlie Brown. They show how to shimmy and how to step lively to Jailhouse Rock performing catchy and vivid songs which morph into each other as the cast interweaves into various combinations in song and dance.

It is impossible to know where to begin the praise. Special kudos to Kat Gold and her full-throated, magnificent voice. She can really belt out a song –shades of Ethel Merman. Not to be outdone, there is no more mobile and expressive face than that of Nethaneell Williams who is nothing if not charismatic.  His smile, alone, could light up a room. These two are joined by Stephanie Loverde, Austin Rivers, Andre Russell, Michael Schneider, Charisse Shields and Aili Veho — all lithe, athletic, high-spirited and amazingly versatile. Many of the songs became famous; most tell fascinating stories.

There is such a tremendous variety of mood. Pearl’s a Singer, for example, tells the story of a failed artist who still dreams of the success she might have had. It is plaintive and pointed as hauntingly sung by Veho.

In an opposite vein, the song Poison Ivy describes a horrible girl who is as worth avoiding as measles, mumps, and chicken pox. However — in an interesting vocabulary note  — lyrist Leiber once said that “Poison Ivy” was actually a metaphor for sexually transmitted diseases.

Characters abound. D.W. Washburn tells a story of a homeless man, chosen by a well-meaning charity for a wash-up and a meal. Washburn declines, preferring his jobless, drunken lifestyle.

The best-known songs include Hound Dog, Fools Fall in Love, I am Woman, and Stand by Me. Leiber and Stoller, who began their creative partnership as 17-year-olds,  wrote over 100 hits and are noted for being the first to surround black music with elaborate production values.

The original Broadway show was nominated for seven Tony Awards and won a Grammy Award in1996 and after a Los Angeles try-out ran on Broadway for 2,063 performances making it the longest Broadway review in history. And just think, it is only here until January 14. Hurry. Don’t miss this one. If you can’t make it, however, there is a DVD live recording of the original Broadway cast available from Amazon and EBay and many of the individual songs can be seen and heard on YouTube.