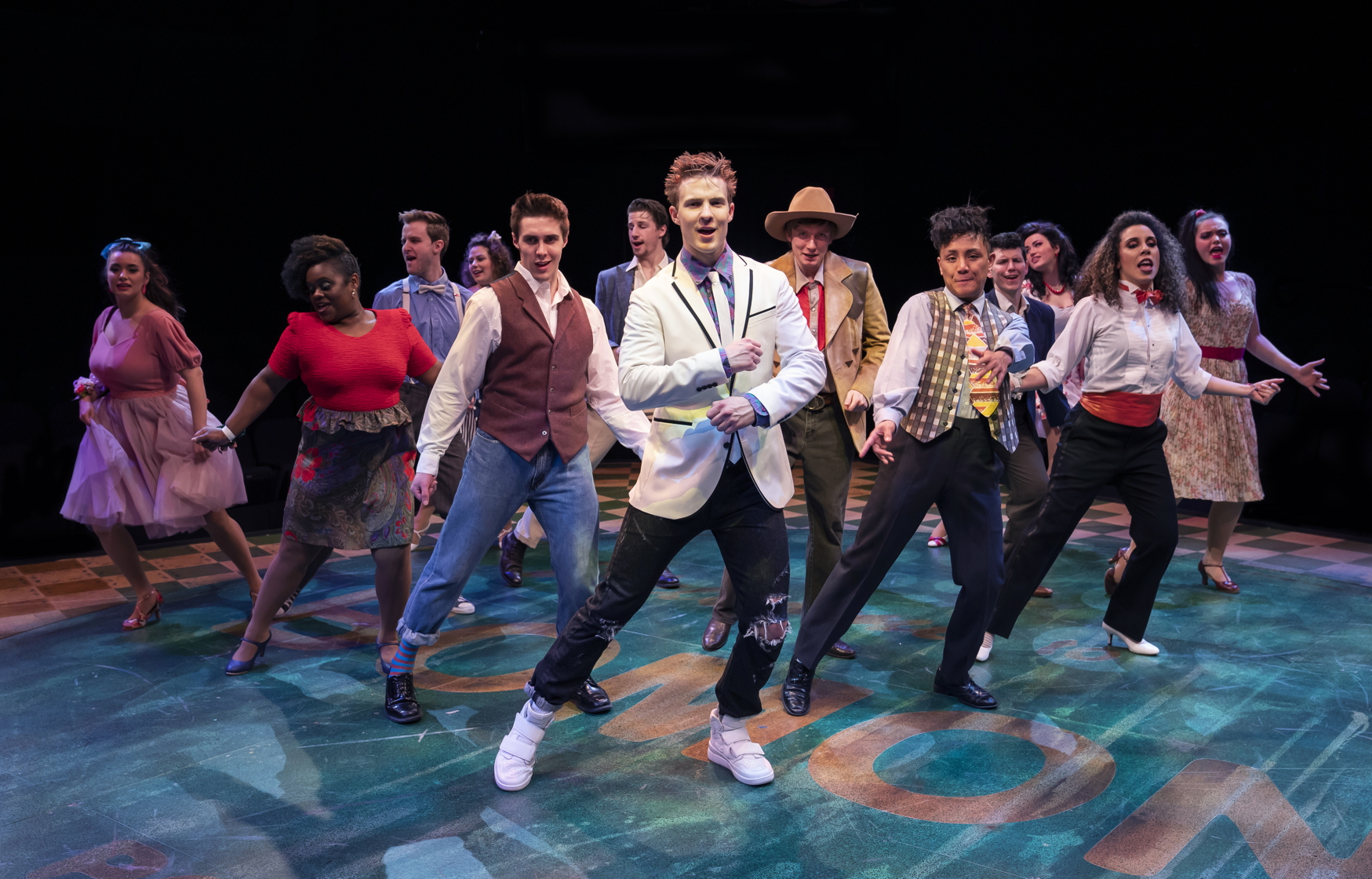 Even when the original movie came out in 1984, Footloose’s central plot premise of a small Midwestern town that bans all dancing as being a pathway to drinking and illegal drugs, etc. seemed antiquated and, almost, quaint. Thirty-five years later, it hasn’t aged particularly well. The adults in this archetype of the “sleepy little town” seem artificial, reacting severely to very little cause, more like stereotypes than actual people. But what the Marriott Theatre’s new production of the 1998 musical proves does still work is the show’s wonderful music: from the rock and roll dance power of the title song to the sweetness of “Almost Paradise” to the comical celebration of motherly advice that is “Mama Says,” Footloose can still soar.

The story is based on that Kevin Bacon movie, and Dean Pitchford and Walter Bobbie changed little of the Pitchford screenplay when they adapted it. It still focuses on Ren McCormack (Aidan Wharton), a fish out of water after his father left home, forcing his mother (Heidi Kettenring) to move them from Chicago to a tiny town called Bomont, where she can move in with her sister. (That these women have nothing in common is not a part of the script, but that does raise the question of how they are products of the same upbringing.) Ren, who lives for dancing and “can’t stand still,” is shocked to discover the town’s prohibition, led by the solemn Reverend Shaw Moore (Jim Stanek) and backed by the town council, that has been in place since a drunken car accident claimed the lives of four of its teens six years earlier.

Ren immediately runs afoul of the anti-dance law and therefore of all of the adult protectors of the status quo in the town, especially Rev. Moore, whose antipathy is exacerbated by the fact that his rebellious daughter Ariel (Lucy Godinez)—who has been dating the town bad boy (Ryan McBride)—finds herself attracted to the new kid. Apparently someone who likes to dance is far worse than a dropout who is considered rotten by everyone in town. (McBride’s arc involves clear and aggressive animosity toward the boy who is taking his place, but it is forgotten as the show moves on only to be “resolved” way too easily.) Ariel is a strong creation: Godinez imbues her with the kind of passion that cannot be contained in a town like this, but at the same time it’s clear that one thing she really desires is the love of her too-conservative father; Daddy, however, has withdrawn from life so far that he can’t even see that his marriage is collapsing and that his wife Vi (Johanna McKenzie Miller) desperately needs the return of the once-loving man she married.

Of course the boy from the city pops into town and saves it from itself—that’s just one of the stereotypes this plot trades on—but along the way we get to meet sweet characters like Rusty (Monica Ramirez) and Willard (Ben Barker), a boy and girl who are thisclose to being a couple, were it not for Willard’s terminal shyness. (He takes out his frustrations by challenging everyone to fights he clearly would lose.) And we get to hear some great songs, some of which were written for the musical by Pitchford and Tom Snow and some of which came from the movie’s soundtrack, like “Let’s Hear It For the Boy” and “Holding Out For a Hero,” the latter of which, energetically belted by Godinez, deservedly received on opening night one of the longest ovations I’ve ever heard.

The show, directed by Gary Griffin, wisely casts most of its focus on the kids, their new leader Ren, and the glorious choreography by William Carlos Angulo, who defies the theme that these characters have never been allowed to dance by crafting some elaborate and fun dance numbers for them which this capable cast makes look easy. There are also some powerfully haunting moments, like “Somebody’s Eyes,” which attempts to teach Ren how careful her needs to be in a small, gossipy town, and some soul-searching ones involving Reverent Moore that delve deeply into his faith.

The bottom line is that Footloose, though it is a less than perfect vehicle, gets the audience on its feet with toe-tapping, hand-clapping 80s music and considerable character charm. It is never less than entertaining, and what else do you need?