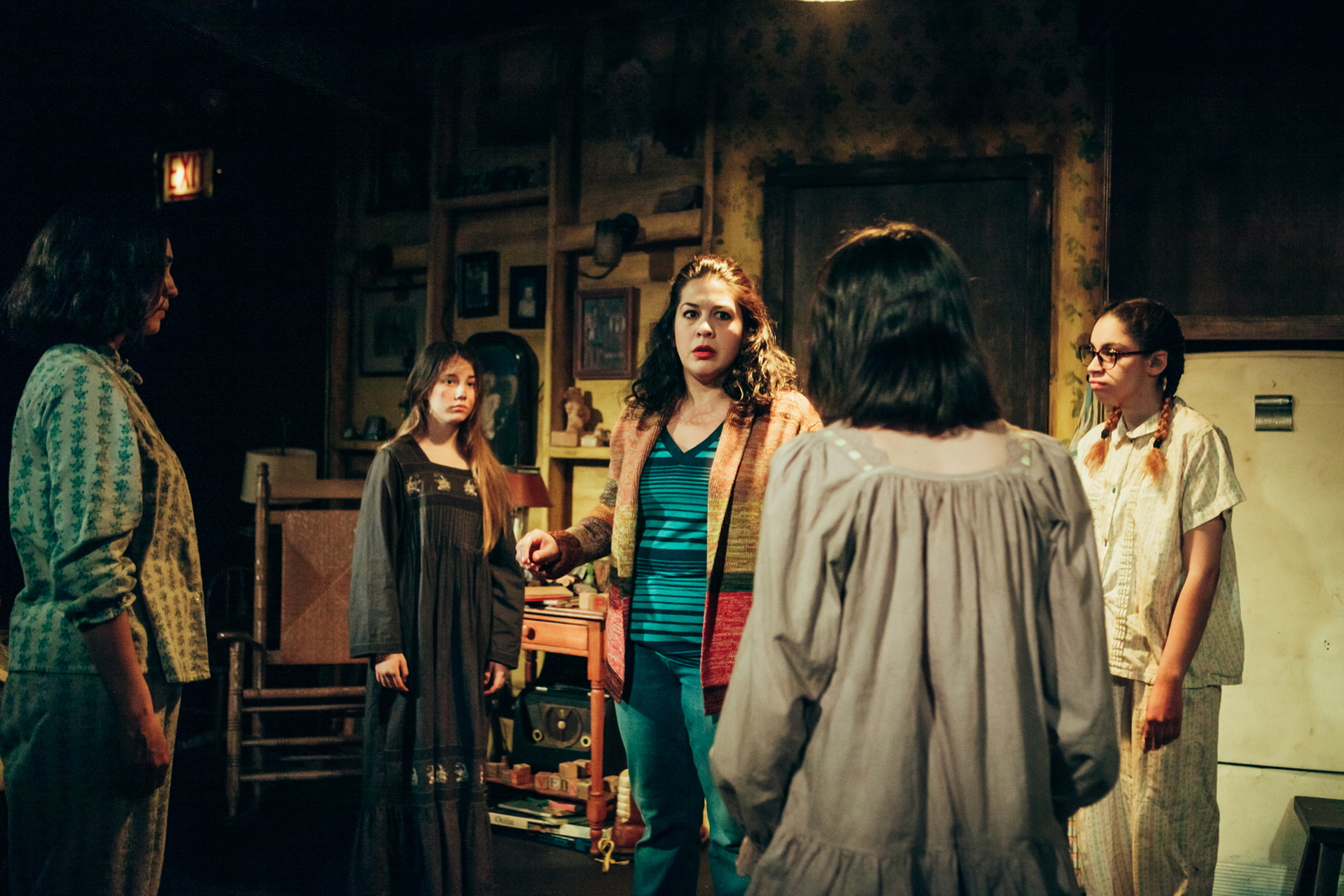 Stop me if you’ve heard this one or anything like it:

On a bleak midwinter night, a young couple is driving cross-country toward the woman’s father’s house when they run smack dab into an unexpected blizzard. On a road piling up with snow in a nearly undrivable mountain pass, they hit a deer that looms before them and crash into a tree. The woman is not really hurt, but her boyfriend’s face is gashed and his leg broken, and the car isn’t going anywhere. Fortunately, although they are deep in the snowbound woods, they have managed to stop very near an old cabin.

Yup: A Red Orchid Theatre’s intense and surprising Grey House, by ensemble member Levi Holloway, is indeed a variation of the “cabin in the woods” horror genre. It’s safe to say, however, that you’ve never seen a play or a story quite like this one before.

It begins inside the cabin, as several children, dressed in pajamas, sit around quietly, having apparently just awakened. Two girls relax in chairs. One reads a book. One is busying herself with some kind of off-stage activity that requires, among other items, a hacksaw. And the lone boy sits silently on the floor, playing with a game by himself. Gradually, the group comes together as they sing a strange tune that they have clearly sung before. And then, outside in the storm, there is a crash. The children, and the one adult in the room, immediately take off to other parts of the house, leaving the room dark and empty when the couple, Max (Sadieh Rifai) and Henry (Travis A. Knight), knock on the door, entering when there is no answer.

It’s an oddly creepy opening, and things get stranger from there. Max and Henry meet the family living there who are palpably excited to have visitors and help bind his leg, offering some moonshine for the pain. But as the children gather around them, something seems a bit…off. The youngest girl, Squirrel (Autumn Hlava), somehow is able to speak simultaneously with Henry, using the same words. The deaf girl, Bernie (Kayla Casiano), seems to have some sort of mental power. The oldest girl, Marlow (Sarah Cartwright), speaks in an odd, inquisitive, almost threatening manner. The mother, Raleigh (Kirsten Fitzgerald), seems weirdly subservient to her children. Only a girl who calls herself A1656 (Haley Bolithon) and the young boy (Charlie Herman) appear to be somewhat normal. Also, there is something bizarre about the refrigerator, and the house itself feels almost alive. As Henry sleeps through his pain, Max is left trying to understand this unusual troupe while nursing her boyfriend back to health.

Grey House never lets up. To discuss any of the weird developments would be to take away some of the wonderfully macabre energy of this edge-of-your-seat horror story in which unusual things happen so quickly that they almost begin to seem normal, drawing Max and Henry deeper into…whatever is going on here. Holloway’s ominous, unpredictable script, coupled with disturbing characterizations from the young actors and direction from Shade Murray that is designed to make your skin crawl, keeps the audience in suspense for the entire 100-minute show.

Of course, Murray’s creative team is also a major help. Lighting designers Mike Durst and Claire Chrzan create some stunning effects in a play where even bare light bulbs can terrify. With the help of sound designer Jeffrey Levin, they give the house and the storm lives of their own. Karen Kawa’s costumes help as well: the seeming innocence of the girls’ nightgowns and pajamas just might be hiding something sinister.

The cast is universally excellent, but Cartwright and Rifai are standouts. Cartwright’s demanding and menacing Marlow sets the tone for many of the play’s sequences, and Rifai morphs easily from frightened and confused to playful and even childlike herself. Her Max joins the girls for songs and games and makes them breakfast even while utterly unable to make sense of what is happening around and to her. They are pretty much at opposite ends of the creepiness chart, but they complement each other beautifully. Oh, and there is also a thoroughly spooky appearance by Dado.

Grey House is a perfect play for A Red Orchid to produce during the Halloween season, a new show that is designed to unnerve even the most stoic of audience members. It’s not grotesque (mostly) in its scare tactics, but it draws us in until we are feeling the same unsettling fear that nothing here is really what it seems to be. Like all great spooky stories, this one doesn’t go for the jugular right away; rather, it is content to worm its way slowly past our defenses. At times, it feels very confusing; at others, it might be almost adorable if the children were not so singularly (and collectively) peculiar.

Henry James said that the inclusion of children in a ghost story “adds another turn of the screw” to the tale, upping the tension; how tight does it get when there are five children? Holloway’s brazenly supernatural story and Murray’s deft and disconcerting staging make Grey House a gloriously eerie experience, spine-tingling and goose pimple-inducing. But as we finally begin to understand the pain and secrets that this house holds, we, like Max, may feel less frightened and more at home in a cabin that only our nightmares—or our own wounds—could create.

Grey House is now playing at A Red Orchid Theatre, 1531 N. Wells, Chicago, through Dec 1. Check the website for specific dates, times, and tickets. Find more information about current plays in our front page recs and at theatreinchicago.com.