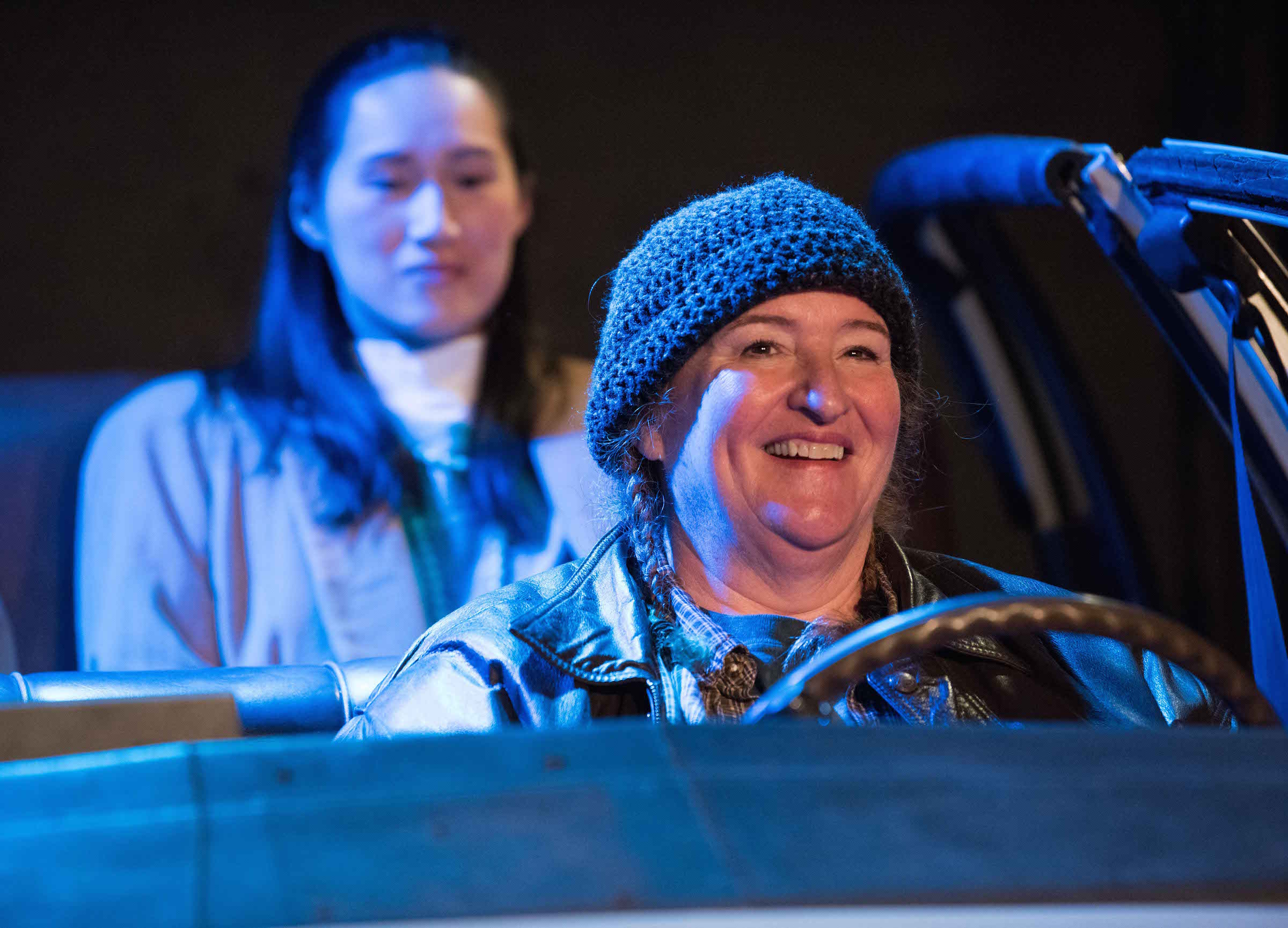 The Agency Theatre Collective is back once again with its unusual holiday offering, Hellcab, Will Kern’s tale of a particularly crazy night in the life of a Chicago cab driver a few days before Christmas. As she picks up a variety of unusual and otherwise memorable clients, the bone-numbing chill of the day fades into the background of the roller coaster of emotions that sometimes overwhelm her. This is not traditional holiday fare, but in the hands of a deft company it is very entertaining, funny, and meaningful. Summer Austin directs Rusty Schwimmer as the cab driver in this year’s version of the 1992 script, which in many ways still seems (somewhat sadly) perfectly relevant today. Schwimmer is wonderful as the driver who begins her day with a smile for her customers but has to deal with so much throughout it, from an out of control crackhead to a threatening, angry young man in an abusive relationship with his girl, to a couple whose baby just might pop out in her cab on the way to the hospital, to a too-slick chauvinistic SOB who is just using the young woman he got into the cab with, to a woman playing Christmas carols on an accordion, to a couple of hyper-Christians who try to convert her, to a lunatic who believes that the only future of the human race is “space exploration,” to a young woman who has just been raped. As I said, a roller coaster. Schwimmer’s solo reactions when she is alone in the car after her fares leave are some of the highlights of the show, in the “What the hell was that?” mode. She is a very expressive performer and uses almost everything in her repertoire as her character has cause for concern, fear, joviality, panic, friendliness, wariness, anger, frustration, amusement, and all sorts of emotional responses.

I was going to write, “all sorts of emotional responses that may or may not have anything to do with Christmas,” but then I realized that to do so would be to miss the play’s main point: Christmas is not just a single set of experiences. It’s a day in the year. Life goes on for millions, and life is messy and complicated. When the cab driver stops to tell a nice woman that her boyfriend is a jerk, she is warned that the reaction may not be what she expects. It isn’t: she is the one who ends up crying, and the other woman offers to comfort her. Emotions sneak up on you, and Christmas brings them out in droves. When she sits in her cab, almost catatonic, after picking up the rape victim who was supposed to be her final fare, she finds she cannot even process what has happened to the woman. Until her actual final fare helps her and makes a sincere Christmas gesture, the world seems to have crashed. But you can never count humanity out, either.

This is a fascinating study of who we are, condensed into a single night in a single cab. It is based upon the personal experiences of the author, though there are some parts that could use updating. In scenes dealing with race relations, no matter how many years of Christmas wishes go by, we seem to be in the same positions the next time around; these characters and their issues might have been from 2017, not a quarter of a century ago, and the realization is startling. But even more startling are the cab fares: when you can’t even sit down in a taxi without the meter reading $2, a full fare of $2 seems a bit ridiculous. I often found myself wishing that Kern might take some time to update his script in the easy ways needed to make it seem as completely current as the social issues still, unfortunately, are. (Like, um, you do know that the Cubs have won the World Series, right?) When so much of it just feels timeless, it’s a shame not to fix the stuff that dates the script.

Lighting by Ellie Humphreys and sound by Connor Ciesil go a long way toward helping to create the illusion that Elyse Balogh’s taxicab set is actually moving as the script suggests, Haley Rakowiecki’s costumes are wonderful, and Austin keeps things moving fairly quickly throughout, and the solid ensemble of actors create what seem like dozens of interesting characters. There is a bit of a repetitive aspect to the structure after a time, though I suppose it could be argued that this too is a mimicry of a cab driver’s life. In all, though this may not be a cab you’d want to be riding in real life, it makes for a solid evening’s entertainment.

Hellcab is now playing at The Den Theatre (presented by The Agency Theatre Collective), 1333 N. Milwaukee, until December 23. Performances are Thursday through Saturday at 7:30 PM, Sundays at 3 PM. Tickets are $5-30 and are available from The Den Theatre. Find more information about current plays on our Current Shows page and at theatreinchicago.com.