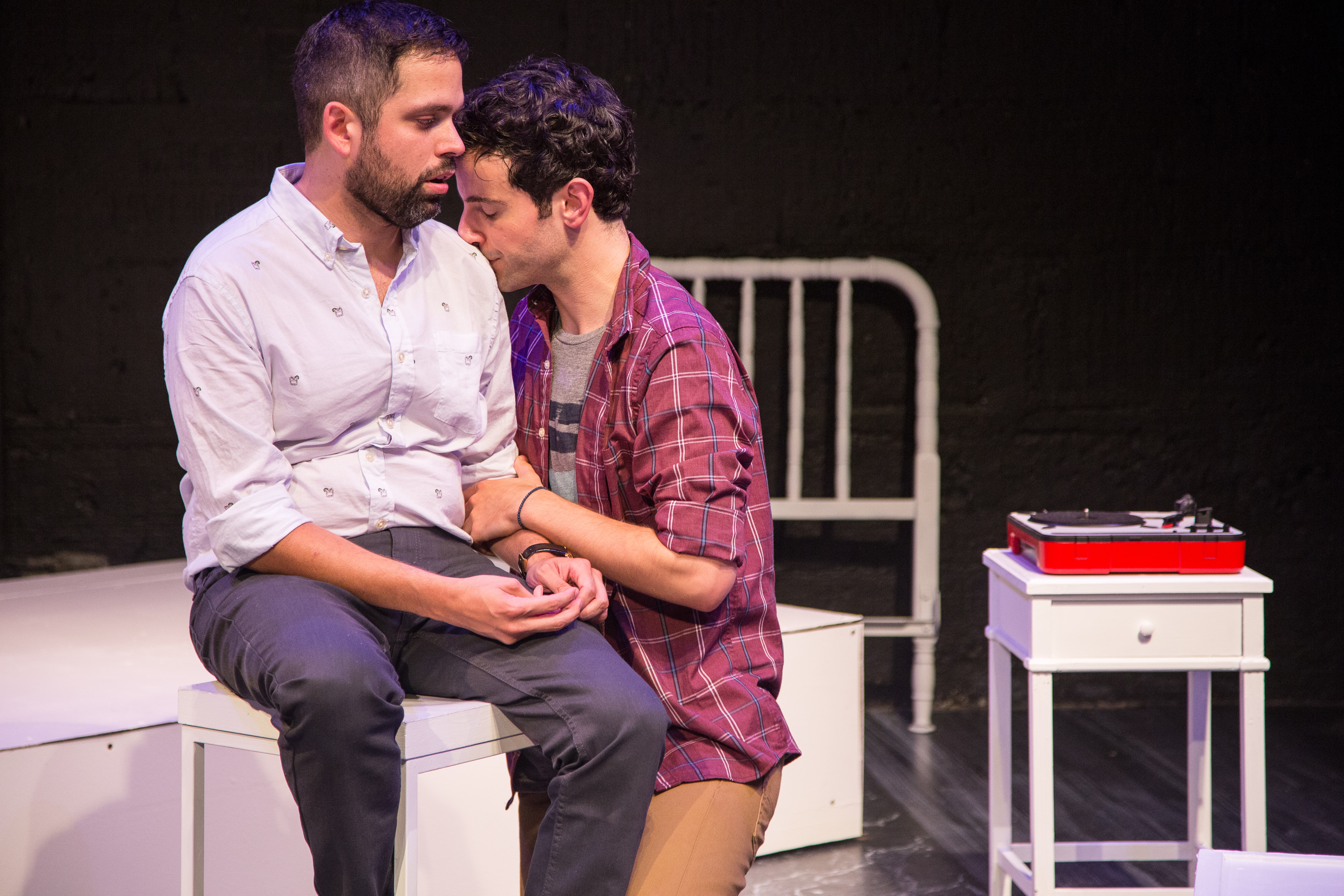 Jordan Seavey’s Homos or Everyone in America is a sexually blunt, politically incorrect, outrageously funny dramedy that is as much about life as a couple as it is about life as a gay couple, which probably explains the title. Gay or straight, we all can empathize with the many familiar moments depicted in the play: it may focus on two gay men but it’s really about “everyone in America,” especially those in urban environments.

Set in New York City between 2006 and 2011, Homos jumps around seemingly randomly in time, starting in an upscale bath shop in a scene that makes little sense at the time until you see it in context later on. And that’s the trick Seavey uses: those little moments are foreshadowed and then repeated two or three times until we finally see how they fit. The effect is to make us all voyeurs on a couple’s life together: we see all of the major moments in glimpses, from meeting for the first time on a Friendster date to breaking up on a subway platform to everything in between (and a few things afterwards). It’s a trajectory that many relationships take: from meeting to lovers to breakup to friendship. As such, one could argue that no truly new concepts are covered in Homos, but that would be missing the point entirely. Homos doesn’t want to mine new territory; it wants to show us that gay relationships are like all relationships, no more and no less.

To do so, Seavey has created two characters that are never even named, the Writer (Niko Kourtis) and the Academic (Nelson Rodriguez) and written their lines in fast-paced, overlapping snippets of dialogue that mimic the pattern of the scenes. And director Derek Van Barham paces everything so quickly, zipping from one scene to the next with the aid of G. Max Maxin IV’s lighting scheme, that we never quite know what is coming until we get there…which is also the point.

Kourtis and Rodriguez shine in what is basically a two-person play (Jordan Dell Harris and Jessica Vann play very small parts). Kourtis is so immediately ingratiating that pretty much anyone would want to take him home from the wine bar at which their date takes place, and the more pensive Academic falls for him in a moment. Rodriguez invests so much into their relationship that his shocked cries at their breakup are some of the most pain-drenched lines since “Stella!” The actors are equally at home in cute, lovey-dovey scenes as they are in the inevitable fights that all relationships have, and are immensely watchable for this entire long one-act show filled with sometimes raw emotion.

Seavey’s script name-checks Larry Kramer, gay iconic playwright of the AIDS era, and perhaps seeks to play as a bookend to Kramer’s work: here is a gay relationship in a new frame, one that is not shadowed by disease. (A frequent request from the Writer for a threesome—not something the Academic, deeply in love with one man, wants—mentions AIDS only in few throwaway lines that show how far we have moved from that era.) This is a new gay world, one in which, like “everyone in America,” they have rights never before dreamed of and lives that exist in the open instead of being limited to bathhouses and closed doors.

Though Seavey takes great care to maximize this concept, he pulls no punches whatsoever when it comes to gay matters here, with frank dialogue about anal sex and poppers and an attempt by the Writer to reclaim the anti-gay “f” word smear in the same way that rap musicians have reclaimed the “n” word. Expect a lot of lines and blocking that reference gay sex life. If this is too much for you, well, why are you even considering going to a show with such a provocatively gay title? Besides (and not to belabor the point), there are plenty of plays and films, etc., in which such references to straight life exist; this play simply puts gay life into the same mix as everyone else. It is not, as I said, a novel theme, but the bluntness with which Seavey shows it to us is. He seeks to desensitize this material, to make it all less shocking by pushing it to the extreme. He wants to get past the notion that any of this makes any difference whatsoever. There is an ongoing reference to a story the Writer has written that compares an out gay 15-year-old to a closeted famous journalist in which it is clear that the journalist should not be ashamed or afraid of who he is. The Writer and the Academic, in this new era, are completely out; no one should have to pretend to be what they are not.

Barham and his actors handle this material brilliantly. The director, working on a stark set by Maxin, paces everything so well that the repeated scenes are upon us before we see them coming. He makes it clear that one of the points of the choppy, iterative structure is that all couples have moments, great and small, that are repeated again and again and remembered again and again. Kourtis and Rodriguez, for their parts, make us deeply care for these characters (even when Kourtis has a cringe-worthy anti-Semitic monologue, which the Writer excuses because he is Jewish himself). Since there are no stakes in the relationship (we know it will end badly fairly early) we invest in the people instead. And the result is that we share their love and pain even more. This is a play filled with humor and passion, brilliantly performed and directed, and a perfect start to Pride Films and Plays’ new season.