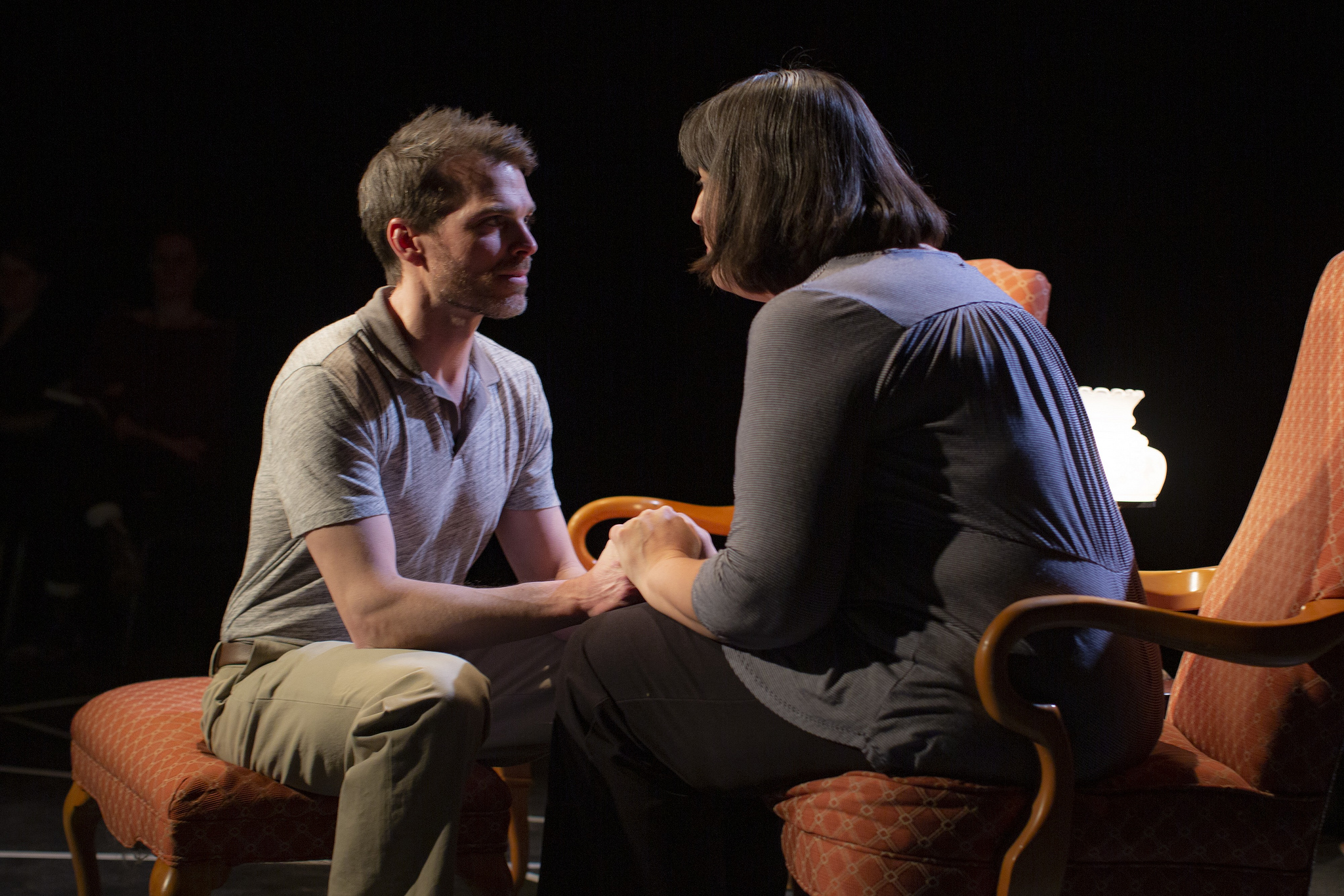 Reaching for dreams, even impossible ones, is what being human is all about. We are the one animal on Earth that wants to better its lot, that dares to believe that such a thing is possible. But dreams, large or small, often come with a cost, and that is the focus of Chimera Ensemble’s latest offering, How to Live on Earth, written by MJ Kaufman and directed by Gwendolyn Weigold. The play tells us that dreams always have a price, whether we achieve them or not, though they are the only way that progress is ever made.

The play follows four main characters, Eleanor (Katlynn Yost), Omar (Arif Yampolsky), Bill (Brian Sheridan), and Aggie (Hannah Larson) as they allow themselves to dream of doing something monumental: joining the first manned colony on Mars. Well aware that it is a one-way journey and that they’d be leaving their world behind forever, these four characters each have their own reasons for desiring to go anyway. Eleanor is a school librarian, certain that her organizational skills would add positively to the colony. Omar is an accountant whose seemingly happy life with his boyfriend (Jermaine Robinson, Jr.) hides an empty spot in his soul. Bill is a high-achieving doctor with Medicin Sans Frontieres who can’t ever seem to find and who firmly believes that his skill set would be invaluable in such a mission. And Aggie is a directionless young woman who dreams of finally doing something significant with her life.

As the play begins, each of these disparate people is submitting applications to NASA to join the mission. Of 220,000 such applications, they hope to be among the final 24. Not all of them will make it, the cruel reality of numbers shattering their dreams before they are fully underway. But that too is part of the play’s message: dreams, once you have them, change your life one way or the other, and not always in the ways that you might have expected. The call of the dream remains even after rejection for these would-be astronauts, a new hole in their hearts. But even achieving the dream can come with costs, as is obvious from the one-way nature of the journey. And some such costs come as unwelcome surprises.

Each of the main characters has earthbound relationships that would need to be severed if they should be chosen. Eleanor has recently begun an affair with a poet (Graham Carlson). Omar has his boyfriend, who cannot understand why he would want to give everything up to go to Mars. And Aggie and Bill have families they would be leaving behind—in Aggie’s case a father (Bob Webb) she feels she has always disappointed, and in Bill’s case a mother (Stacey Lind) who loves him dearly and a brother (Siddhartha Rajan) who has always seen him as a rival. These relationships pull them, successfully or not, to remain at home while their senses of adventure and destiny pull them toward space.

With news stories constantly telling us how we are destroying the planet we now call home, the desire to colonize space makes more and more sense, but this play tells us that it will never be easy either scientifically or emotionally. Kaufman’s script, presented as a series of brief scenes each highlighting one of the main characters, shows the power of allowing the dream of escape to enter into our lives. It continues to exert itself even if we are forced to give it up: once engendered, such unfulfilled dreams can dominate us forever. And if we achieve our dreams, they don’t always come out as we had hoped or planned. Of these four characters, only one comes close to being able to handle the disappointment of failed or achieved dreams. The others are destined to be haunted by what might have been.

Weigold keeps the play moving along briskly, taking us from scene to scene smoothly. She also gets some strong performances from her ensemble. Yost in particular shines as the one character who is able to keep her life moving on a positive trajectory after the fact. Larson, too, as the woman who can’t settle herself in life before or after the dream, gives a heartfelt performance. Her character forms a relationship with the doctor’s brother, seeking to continue her connection in some way to what she has lost. Sheridan and Yampolsky are excellent in showing the varying ways that dreams can cause you never-ending pain.

One silent scene, featuring Lind and Sheridan, stands out as a powerful reminder of the losses dreams can create. Lind’s mother watches her son on a video, again and again, as he starts to feel the pain and disappointment that leaving everything behind can bring. Each time she rewinds the video and we see Sheridan moving through the same small moment, we become more and more aware of the stakes involved.

How to Live on Earth argues that big dreams are needed for the species to survive, but it also shows the sacrifices that must be made by the dreamers, who give up their lives or parts of their lives in an effort to do something meaningful. Maybe, it tells us, life would be better if we allowed ourselves to find our joy in the lives we are already living.

How to Live on Earth is a Chimera Ensemble production now playing at the Studio in the Flat Iron Arts Building, 1579 N. Chicago, until Mar 24. Check the website for specific dates, times, and tickets. Find more information about current plays in our front page recs and attheatreinchicago.com.