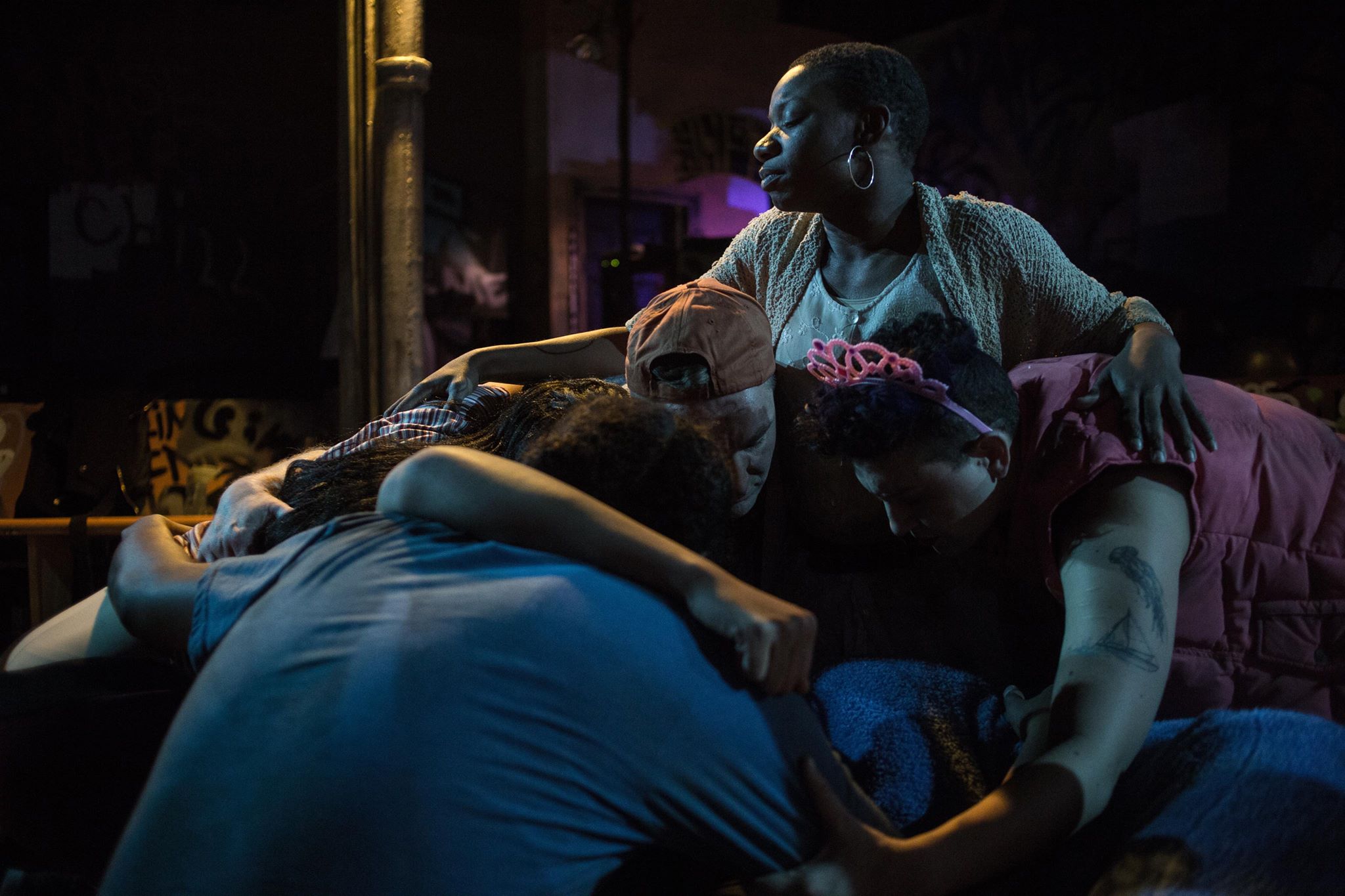 There were a few times during Red Tape Theatre’s opening night of Suzan-Lori Parks’ In the Blood when audience members laughed. But Parks’ overwhelming drama is anything but funny; rather, she rips your soul out through your eyes and ears as this loose adaptation of Nathaniel Hawthorne’s The Scarlet Letter becomes an allegory for a world in which poverty is a curse and even those who ostensibly should be helping are acting in their own, often dark, self-interests.

The story concerns an African-American woman named Hester (Jyreika Guest) who has five children with five different deadbeat dads. Hester, who is always willing (perhaps too willing) to give of herself to others, has nothing to show for it but her own illiteracy and children ranging from two to thirteen. She and her children live under a bridge in a homemade shelter, and she does her best to bring joy to their days and food to their stomachs, even if she herself starves. Throughout the play, we see Hester as a kind of Everywoman to whom the world has been very unkind.

“I think the world doesn’t like women,” she tells the welfare worker (Kiayla Ryann) at one point. The welfare worker disagrees, pointing out that she is a woman and she is doing fine. But in a monologue to the audience, we can see how this woman used Hester for her own purposes: her husband wanted to try a three-way and Hester was convenient and willing. The welfare worker justifies her actions by noting that Hester got to spend a day in her upper middle class home, but the reality is that she is just another person who has used Hester and thrown her out.

We meet two of the dads, the most direct stand-ins for Hawthorn’s characters: a reverend (Richard Costes) who is the father of her youngest child (also played by Costes) and a man named Chili (Max Thomas), the long-missing father of her first child Jabber (whom Thomas also portrays). These men are in position to help Hester, but that is not to be. In their own monologues, they discuss how they met her and had sex with her and abandoned her. It is the one constant in Hester’s life: nothing is constant other than her children. She has one friend, Amiga Gringa (Emilie Modaff), but even this character has used her for sex and otherwise takes advantage of her. And the street doctor (Casey Chapman), a sleazy practitioner who wants to forcibly sterilize Hester, possibly so he can have his way with her without fear of consequence, manhandles her during her consultation for his own gratification. Basically, no one she meets is good for her or to her; Parks has stacked the deck against her.

All of the members of the cast other than Guest play more than one character, as each of them also plays one of Hester’s children (including Costes’ take on Baby, the two-year-old, which is perfect), and all of them are quite remarkable. But it is Guest herself, in a tragic role that sears its way into your heart and won’t let go, whose performance you’ll be talking about the next day. It is raw and passionate, powerful and painful, and it is quite simply the best performance I’ve seen so far in 2019.

In the Blood is a powerful, emotional play that is unlike anything else you are likely to see. Director Chika Ike pushes the limits of tragic drama in this play, which owes at least as much to the Greeks as it does to Hawthorne. Each of its nine scenes works to build the dark, abusive world that Hester inhabits, and each actor plays their parts in it. The confessional monologues are difficult to hear precisely because they reveal such ugliness, and Hester’s ultimate fate is probably sealed before the start. The world may not hate all women, but it definitely hates Hester, who cannot buy a break. From the first moment of the play when we focus on the word “slut” painted on the wall, everything about it is meant as a judgment of her life, and she is found wanting. Those who can save her refuse to and she is incapable of saving herself. This is an unremittingly dark play, and one that needs to be seen.

In The Blood is now playing at Red Tape Theatre, 4546 N. Western, Chicago, until Feb 23. Check the website for specific dates, times, and tickets. Find more information about current plays in our front page recs and at theatreinchicago.com.