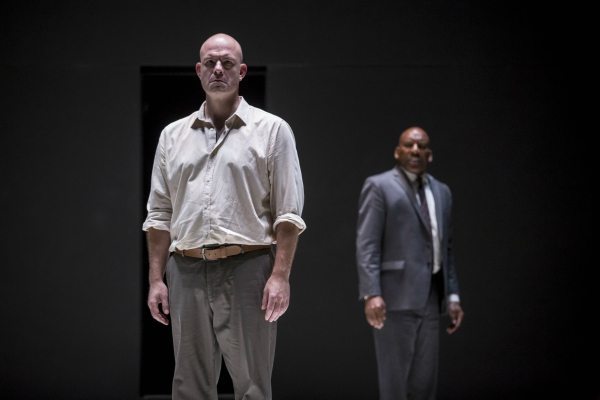 From the Brooklyn Bridge, the view includes the workers on the dock unloading the ships at the piers: to most of us, anonymous men going about their anonymous daily lives. The Goodman Theatre’s current production of Arthur Miller’s A View From the Bridge, though, shows that Miller saw something much more when he looked off of that bridge. As Dutch director Ivo van Hove and the Goodman present it in this intense, edge of your seat drama, his view was that of a life spinning out of control, a tragedy waiting to happen. This production has already won awards in both London and New York, so it makes sense for the Goodman to bring it here to Chicago, another great city that brawled and battled its way to what it is today. And van Hove pulls no punches, either of the literal or figurative variety. His set is extremely minimalist: just a plexiglass square with benches at its top edges: a literal trap for the characters, who never wander outside of its boundaries. Within it: nothing save an odd chair once in a while. And people.

The square space represents the home of Eddie Carbone, a huge lug of a guy played with passion and intensity by Ian Bedford. Like everyone else (with one exception), Eddie spends the play barefoot, unable to provide themselves with even that minimal protection from the world. As the play opens, Eddie’s world is already caving in, but he doesn’t know it. His marriage is not strong—neither he nor his wife are happy in bed—and the little girl he loves more than anything is growing up. Catherine (Catherine Combs) is sixteen and starting to think of her future, though she still, like a little girl, throws herself at her uncle when he walks into a room.

If the relationship between Catherine and Eddie forms the center of this play, its true crucible (to steal another Miller word) arrives in the form of a pair of Italian immigrants that Eddie’s wife Beatrice (Andrus Nichols) takes in while they work (illegally) to make money to send home to their families. Or anyway one of them (Marco, played by Brandon Espinoza) does; his younger brother Rodolpho (Daniel Abeles) is less responsible: he is living for now, and now includes, to Eddie’s immediate chagrin, Catherine.

When the relationship between the two starts to change Catherine, a more unsanctionable aspect of Eddie’s love for his niece surfaces and leads to a horrible internal conflict for him: not just how to control this irredeemable love, but whether he can make the uncomfortable, nasty decision he is considering in order to get rid of his perceived “rival.” It is a crucible of the soul, and Eddie’s was lost before the play began. All but one of the players remain in that plexiglass square, and all but one are barefoot. The exception is Ezra Knight’s lawyer/narrator Alfieri, the one whom Eddie turns to when things start spiraling away from him and the one who, from the outset, knows as Miller does—and as we can sense—that there is no way this will end well. Eventually, Alfieri too will end up trapped within the walls and barefoot, caught in Eddie’s web.

In the climactic event of the play, the internal horror of Eddie’s situation is intensely externalized and the practical necessity for both the plexiglass enclosure and the bare feet is revealed. But neither is merely a practical decision: we can see right through these characters all the way, and the set is an indication of the fact that they cannot hide from themselves or each other. The bare feet are how they entered the world, covered in blood and fluid; it will be how they may leave it, once more a nightmarish mess.

Ivo van Hove’s brilliant staging of this dark psychological tragedy sizzles on the Goodman stage. Bedford’s performance is never a jot less than powerful and disturbing, and he is equaled by everyone else on stage. Combs is a revelation as the teenage niece unknowingly caught in an illicit love triangle, and Nichols provides needed sanity as her mother, trying to save her husband’s soul and their marriage by talking sense to her daughter. Abeles make a great Romeo figure, and Espinoza the intense Tybalt-like character, this time on Romeo’s side, who has never seen a fight he didn’t like. But the most complex performance by far is that of Knight, whose narrator/lawyer finds more emotional levels than all of the rest combined by knowing each one of them and detesting it all. Knight is brilliant in portraying the emptiness and waste he is witnessing and what it does to his character, who loses his own soul as well while trying to do the impossible: save an already lost man.