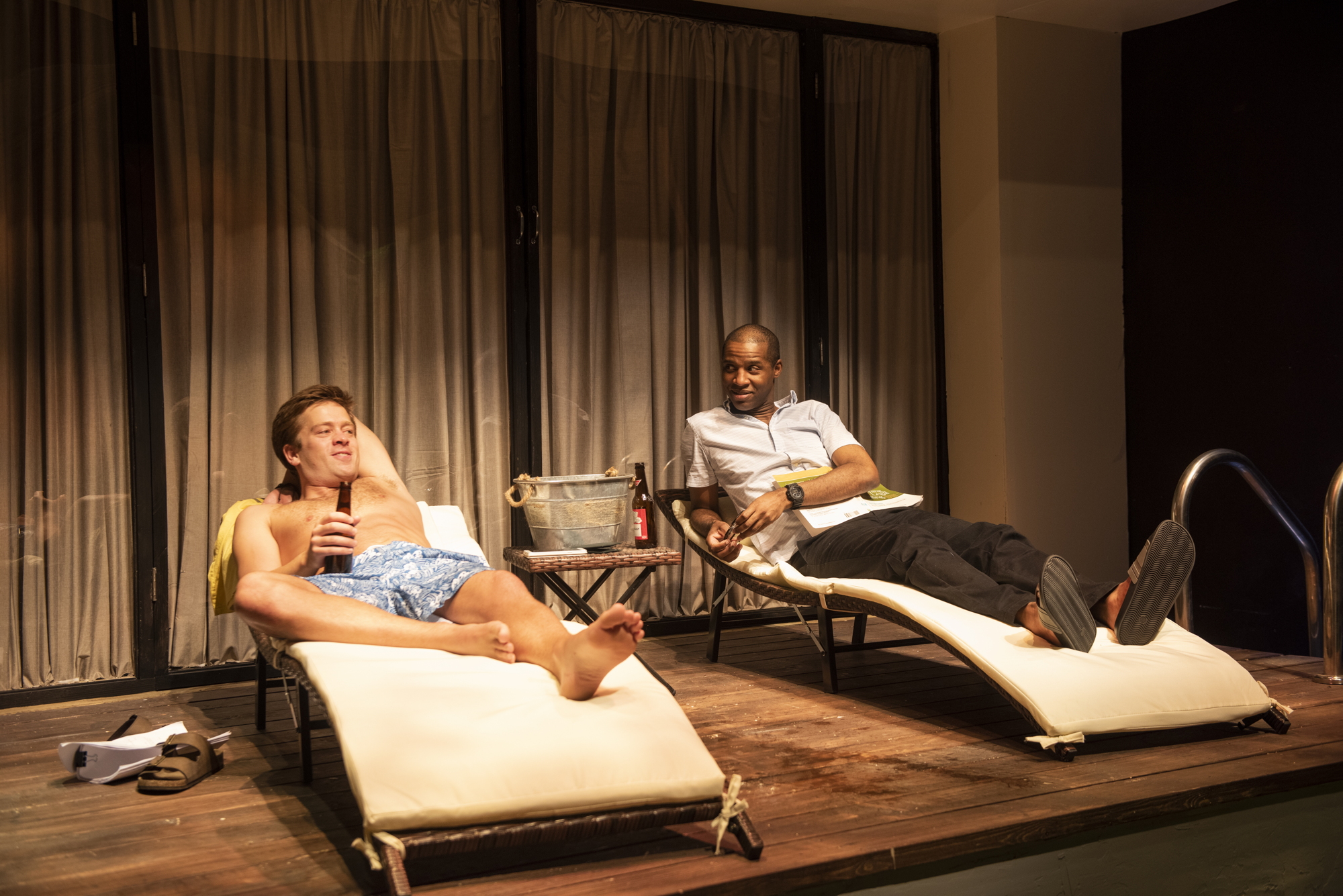 Windy City Playhouse has, in the past couple of years, made a name for itself as the Chicago home of immersive theatre. With its highly successful Southern Comfort (still playing at its new South Loop location) and its wonderfully immersive version of Noises Off, WCP is changing the ways in which audiences experience theatre. Its latest production, The Recommendation, adds to that legacy by telling a powerful story that begins in the lobby and continues as the audience wanders through various realistic locations (designed by Laura Nigri) watching the tale unfold. Playwright Jonathan Caren did not originally construct the play for this kind of presentation, but revised it at WCP’s request, and the result is yet another in what is becoming a series of success stories for the young theatre.

Jonathan Wilson directs this journey through the friendship of two very different men who meet at college and retain a connection for years afterward. Iskinder (Izzy), played by Michael Aaron Pogue, is a South Carolinian of Ethiopian descent whose trajectory in college and beyond, prodded by earnest life lessons from his father, is to work hard to become a lawyer and to help those who, like himself, need assistance on life’s highway. His freshman year roommate at Brown could not be any more different from him: a trust fund kid from Brentwood with a rich lawyer for a father, Aaron Feldman (Julian Hester) is not the hard-working type. He’s lived in a world where connections help everything to happen, and he expects them to help him get started in what he hopes will be a lucrative career in Hollywood. From the start, we see (along with Izzy) that Feldman is only skin deep. He’s easy to like because he is willing to use his privilege to help his friends (he gets his dad to give Izzy a recommendation to UCLA Law School, for example) but also easy to dislike because he has that privilege in the first place and because of it expects more from life than he puts into it.

And his life is working out fairly well for him until one evening when he is pulled over for a broken tail light and is suddenly arrested and thrown into jail, though no one tells him why. (It turns out that he failed to pay a ticket and was driving on a suspended license.) In a holding tank with one other prisoner, a tattooed, muscular young man named Dwight Barnes (Brian Keys) who seems to know the system well from personal experience, Feldman quickly finds things spiraling out of his control for the first time in his life, and he is unprepared to handle this much reality. As he and Barnes are chained together and carted off to County Jail, a terrified Feldman (getting more frightened by the minute as Barnes tells him what to expect there) begs his cellmate for protection, promising to have his father help Barnes in return.

Hester gives a wonderful performance as Feldman. It would have been easy with this character just to punch all of his negative qualities, highlighting his smarmy self-confidence as well as his selfish cowardice, but Wilson and Hester both understand that the secret to success for people like this—and we all have met people like this—is their innate ability to ingratiate themselves with others. A man like Feldman has to be likable, at least on the surface, or he will fail, so Hester walks that tricky path between opposite aspects of the character and thereby renders him very realistically.

Keys is also very solid as Barnes. The repeat felon insists on his innocence but also, ripping off far-fetched but intricate tales as easily as he can flex his muscles, claims to be a Harvard graduate and a close friend of Steven Spielberg. So there is that. Yet there is something likable about Barnes as well. He’s not exactly a criminal with a heart of gold, but he does come through for Feldman after some very friendly conversation (that the frightened Feldman misperceives as threatening). Keys makes us see Barnes as just what he is: someone who has never had much fortune in his life and has made some very bad decisions, but is not a bad man. There is something very powerful in the plaintive tone he takes in a solo scene in which, trapped in prison, he repeats his hopeful and desperate mantra that his friend Feldman will get him out.

As for Pogue, he absolutely shines as the idealistic young lawyer who, because of Feldman’s early help and his own hard work, ends up in a high-powered law firm defending bankers and other such people just after the 2008 Wall Street collapse while he still harbors dreams of helping the (more deserving) helpless. His varied work here, whether in sometimes lengthy monologues or in scenes from various points in his relationship with Feldman, is outstanding, building to an emotional final confrontation that is utterly harrowing as Izzy’s complicated feelings about his old friend come to the forefront. All three actors are outstanding, all the more so for the unusual format in which their performances are given.

As to that format, it’s fair to ask whether this play, which was perfectly successful in onstage incarnations, needed this kind of unusual presentation. After all, in contrast to Southern Gothic, in which audiences wander at their leisure through the various rooms of a home in which things are happening simultaneously everywhere, this remains very much a linear production: the entire audience, moving from place to place in the labyrinthine set, sees the entire show, always in the same order. But I’d argue that Windy City Playhouse (along with Caren and Wilson of course) has reconstructed the play in a truly innovative way that puts us up close and personal with its characters and events, thus enhancing the experience for everyone. The Recommendation is another brilliant piece of immersive theatre presented by a company that really knows what it is doing. I highly…um…recommend it.

The Recommendation is now playing at the Windy City Playhouse, 3014 W. Irving Park, Chicago through Sept 22. Check the website for specific dates, times, and tickets. Find more information about current plays in our front page recs and at theatreinchicago.com.