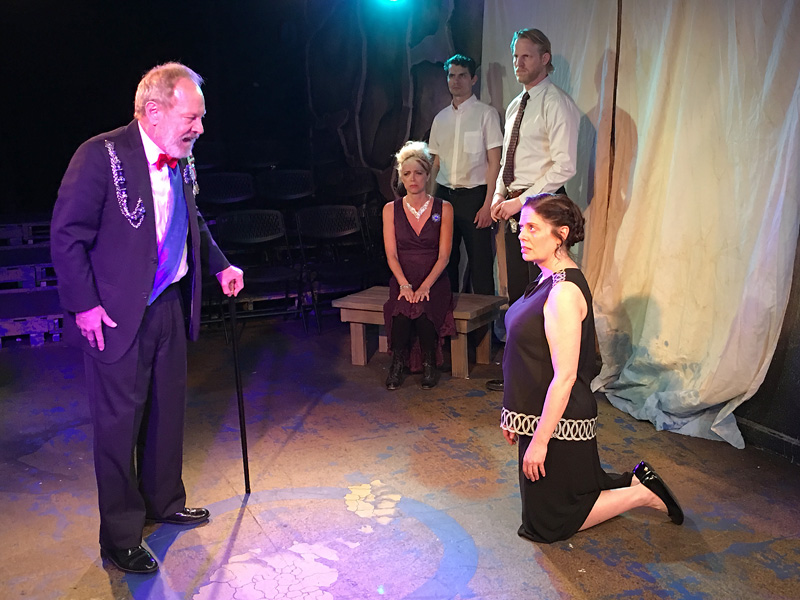 Is it possible to successfully mount a blockbuster, larger-than-life Shakespearean tragedy in a tiny store-front theater: The answer is “yes,” when undertaken by the talented Redtwist Theater cast under the keen direction of Steve Scott.

Nineteen actors performed King Lear in the intimate space between two tiers of bridge chairs while a sell-out audience of 37 sat, spellbound. Nothing distracted from the production – no scenery, no props except for three benches, no costumes except for a slender crown which Lear snapped in half in a moment of fury in the first moments of the play. With no distractions,  the focus remained on the wonderful language.

King Lear – like Hamlet – should be seen by everyone at least once. Many who may not yet have had this great experience at least know the bare bones of the story of two families where the fathers’ lack of insight brings down calamity. Lear (Brian Parry), intends to divide his kingdom among his three daughters and tests each on the depth of her love for him. His adviser, the  Earl of Gloucester, has two sons, but in his case one son manipulates him into believing ill of the other. Both men are more sinned against than sinning.

Kudos to the Casting Director, Julia Skeggs, who chose well. Daughters Goneril and Regan (played by Jacqueline Grandt and KC Karen Hill ) are bitter, brittle women who could have stepped directly into this play from previous roles as Cinderella’s evil sisters. Their fawning praise of their father is far too excessive to be believed except by a narcissist. Set against them is the honest, forthright Cordelia (Kayla Raellie Holder).   Lear, so kind, generous and playful as the tale opens, turns to anger at Cordelia’s answer and banishes her, his best loved child. Throughout the play, Parry wonderfully brings his character down inch by inch to an ultimate madness – it is a bravura performance as he suffers the agonizing realization about having erred in enriching his other daughters. How sharper than  serpent’s tooth it is to have a thankless child.

Not to be outdone is Darren Jones as Gloucester – a counselor who means so well and suffers so much in his relationship with sons Edmund and Edgar, played vividly by Mark West and Robert Hunter Bry: one a villain, the other a hero.

The play is brimful of themes and pithy quotes — family relationships amid dysfunctional families, the corruption of power, pure greed, inheritance, posterity and destiny. As flies to wanton boys are we to the gods. They kill us for their sport.

It is very much a play about cruelty –mental and physical —  reinforced by the weather in a fantastic storm scene.

So universal and timeless is the play that many years ago I suggested an addition to  Oakton Community College’s adult education program: a performance of King Lear in the morning followed by a session on estate planning in the afternoon. This never happened. What a missed opportunity!

King Lear is now playing at the Redtwist Theater, 1044 Bryn Mawr through 8/4. Check the website for specific dates, times, and tickets. Find more information about current plays in our front page recs and at theatreinchicago.com.