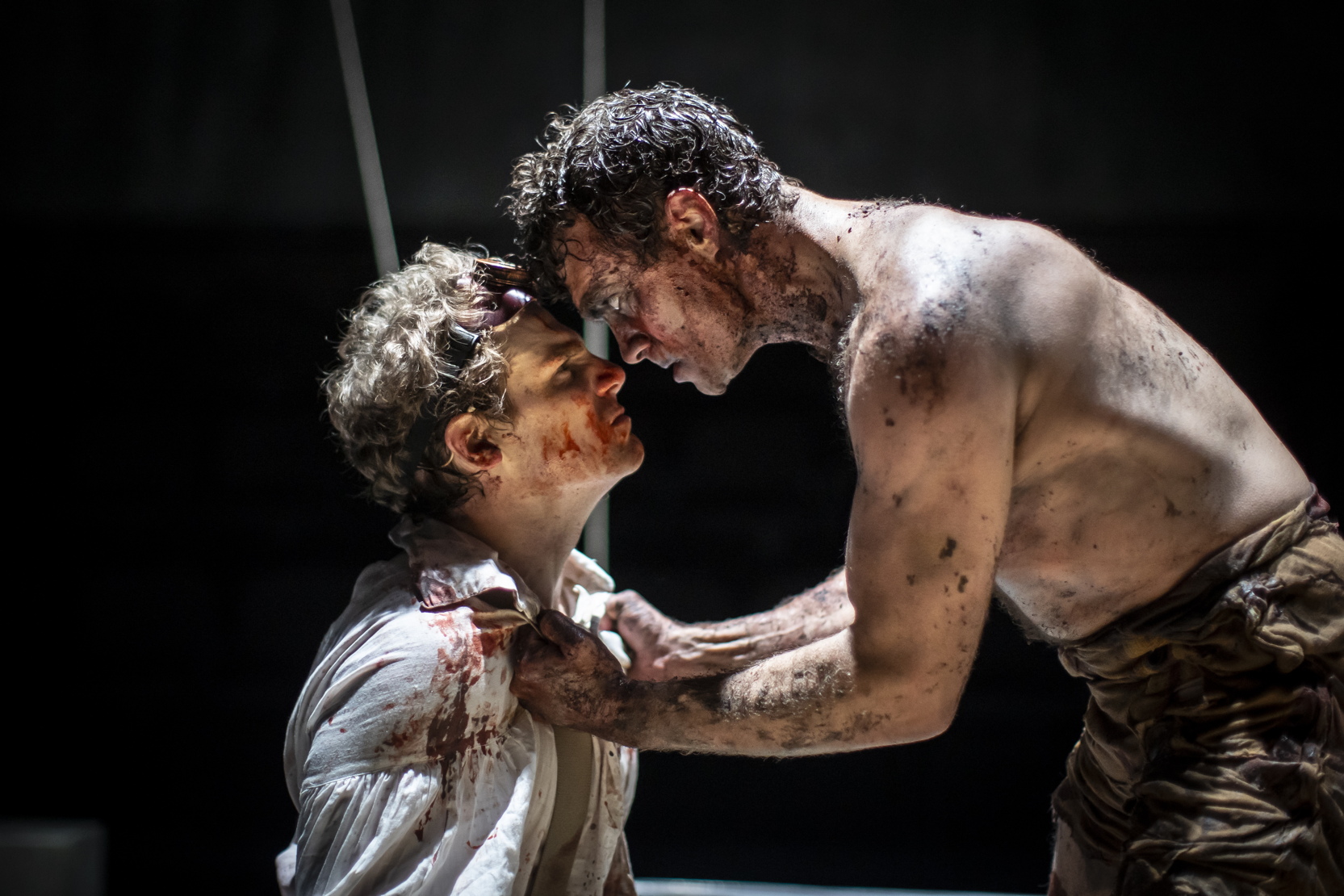 This having been the 200th anniversary of the debut of the horror classic Frankenstein, we in Chicago have been treated in the past several months to several theatrical versions of the story. The fourth and final version is now onstage at Lookingglass Theatre, and in many ways it is the best of them all, thanks to writer/director David Catlin’s decision to blend the story Mary Shelley wrote with the story of the woman herself, a decision that allows more layers of emotional experience to engulf the show than would a straightforward retelling of the tale of the mad scientist who decided to play God with horrific results. Catlin’s adaptation, aptly called Mary Shelley’s Frankenstein, is utterly faithful to the novel, but at the same time exists outside of it as well, in the real world occupied by an eighteen-year-old who had already suffered more than her share of calamity in her young life.

The play opens in a villa in Switzerland where Mary Shelley (Cordelia Dewdney), Percy Bysshe Shelley (Walter Briggs), Lord Byron (Keith Gallagher), Claire Clairmont (Cruz Gonzalez-Cadel), and Dr. John Polidori (Debo Balogun) have been holed up during the cold and dark summer of 1816—the “year without a summer”—entertaining each other with stories. It is Byron’s idea to have a contest of ghost stories, befitting the morose atmosphere, and Mary’s dark, epic tale of obsession and revenge is easily the best. As she weaves her story, the five actors take on various roles within it and we witness both the creation of the tale and the tale itself, with Catlin interweaving dialogue between the Shelleys (who technically were not married at this point) with that of the many characters of the narrative. Dewdney clearly shows how Mary Shelley’s pain influenced her as she spun the tale, captive in a home with the man she loved as well as her stepsister, whom she suspected of having a child with Percy. It was one more turn of the screw in a life that had seen her mother die ten days after she was born as well as her first child miscarried and her father emotionally abandoning her, and each time the script calls for Dewdney to be Mary, her torment is that much more visible.

Catlin’s staging, utilizing pretty much every corner of the theatre on a set designed by Daniel Ostling, invites us to become a part of this epic narrative as well. As Mary’s tale winds its way from Switzerland to England to as far away as the Arctic Ocean, Victor Frankenstein and his creature chase each other all over the theatre. The creature is always a difficult role to bring off well, as he spends most of the novel and the play as a very well-spoken, though hideous, denizen of our nightmares—like Hannibal Lecter, his speech patterns denying his murderous intentions—but Gallagher attacks the role with raw grit, creating a truly frightening monster consumed and embittered by the need for the simple emotion of love that all, especially his creator, have denied him.

But the real monster here might be Briggs’ Victor Frankenstein, whose prolific ego leads him to create the creature and whose terror at what he has done leads him to abandon it to the world. Percy Shelley, upon realizing he is to portray Frankenstein in their little play, at first believes he is playing the hero; he comes to realize that his role is anything but. Briggs, like Gallagher and Dewdney, puts every bit of himself into the role, humanizing this driven character who is the victim of his own hubris. Gonzalez-Cadel is also outstanding in multiple roles, as is Balogun, playing the likable buddy character.

But this is Catlin’s show in every way. From his seamless intertwining of the fictional tale with the story of Mary’s life to his staging conceits that include the use of scrim-like cloth at the start to help isolate his characters (just as the real people they play were isolated in that villa) and Actors Gymnasium-inspired flying and circus movements, Catlin’s vision takes over the theatre. He blends the fantastic (flying) and the gruesomely realistic (bloody organs) as he blends the story with the storyteller, ultimately finding the powerful emotional balance he is looking for. With the help of William Kirkham’s lighting, Rick Sims’ sound design, Sully Ratke’s costumes, and Amanda Herrmann’s props, Catlin’s version of this well-known tale shocks us anew as it allows us to feel Mary Shelley’s heartfelt pain.

After three highly stylized explorations of this material at other Chicago theatres, each with its own successes, Lookingglass now presents a magnificent version that puts the emphasis back on the story itself, and that seems fitting. Shelley’s masterpiece, amazingly created at this villa when she was just a girl, is a haunted, haunting piece of work from a mind that was already very familiar with loss. It has well deserved this elongated Chicago tribute capped by this production that astounds at every turn.

Mary Shelley’s Frankenstein is now playing at the Lookingglass Theatre, 821 N. Michigan Ave, Chicago through August 4. Check the website for specific dates, times, and tickets. Find more information about current plays in our front page recs and at theatreinchicago.com.