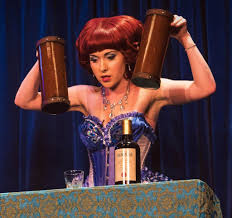 The woman on stage looks like a Hollywood socialite right out of a 40s movie: expensive looking dress and jewels, hair that gives a new meaning to the phrase “too perfect,” a perpetual drink in her hand. Her affected voice and accent scream that she is a member of the coddled, too-cool-for-school elite that spends its time attending parties and openings and air-kissing friends and acquaintances. Even her name is precious: Lucy Darling. The truth is, though, that she is no more real than that perfectly coifed head of hair: Lucy is an alter ego of illusionist Carisa Hendrix, a world-renowned entertainer whose hilarious hour-long show is full of alcohol, hilarious improvised humor, audience interaction, and–of course–magic.

If you have never before attended a show at the Chicago Magic Lounge, Hendix’s “Indulgence with Lucy Darling” is a perfect way to start. Like all evenings at the Lounge, your journey begins by finding your way into the place through the faux laundromat out front (an homage to the building’s previous occupant). Once in, you make your way to the left to enjoy some terrific bar magic (the redoubtable Al James was featured on the night I was there) and maybe a cleverly named cocktail from the bar. (For Hendrix’s show, they’ve come up with one called “The Lucy” made with Bulleit rye, lemon juice, a spoonful of cherry preserves, and a Luxardo Maraschino.)

After enjoying your drink (don’t worry, there is table service inside so you can always order more), you are ushered through a sliding panel to your seat in the Blackstone Theatre (an Art Deco masterpiece named after master illusionist Harry Blackstone). There, after a bit of table magic from wandering house magicians, the main event begins and “Lucy” takes the stage.

Hendrix’s instant rapport with her audience is amazing. Before the night is over she will most likely talk to everyone sitting in the front row as well as some beyond, and she isn’t afraid to joke at her own expense or theirs. She’s a whiz at building off of pretty much anything an audience member comes up with; seriously, it’s like a professional improv session at times, so funny that it’s possible to forget she’s a magician and think she’s a comedian. (On this night, she had a grand time with a couple of women who told her they were librarians as well as a young man named Alejandro who was sitting directly in front of her and became her go-to target for the whole show.)

You’re at the Magic Lounge, though: you came for the amazing illusions. Rest assured: she has those. One of her earliest and simplest tricks involves mixing a variety of drinks from the same ingredients. She asks audience members what their favorite drink is and voila! she pours it for them (and one for herself while she’s at it: three totally different drinks from one pitcher). She performs complex illusions involving mind-reading that seem utterly impossible. And her piece de resistance is beyond belief. (Yes, it again involves alcohol, and no, I’m not going to spoil a bit of it by trying to describe it.) Suffice it to say that you will not believe what you are seeing. And all the while, she keeps up a free-flowing, wonderfully funny banter with the audience, making spending the time with her an absolute joy.

Indugence with Lucy Darling is another showpiece for the Chicago Magic Lounge, which is quickly gaining a reputation as a go-to place for entertainment. Get there early if you can: when the bar fills up, you’ll need to wait outside; that laundromat is not very big. 🙂 And don’t forget to check out the rest room at some point; it’s another part of the fun and an experience in itself.