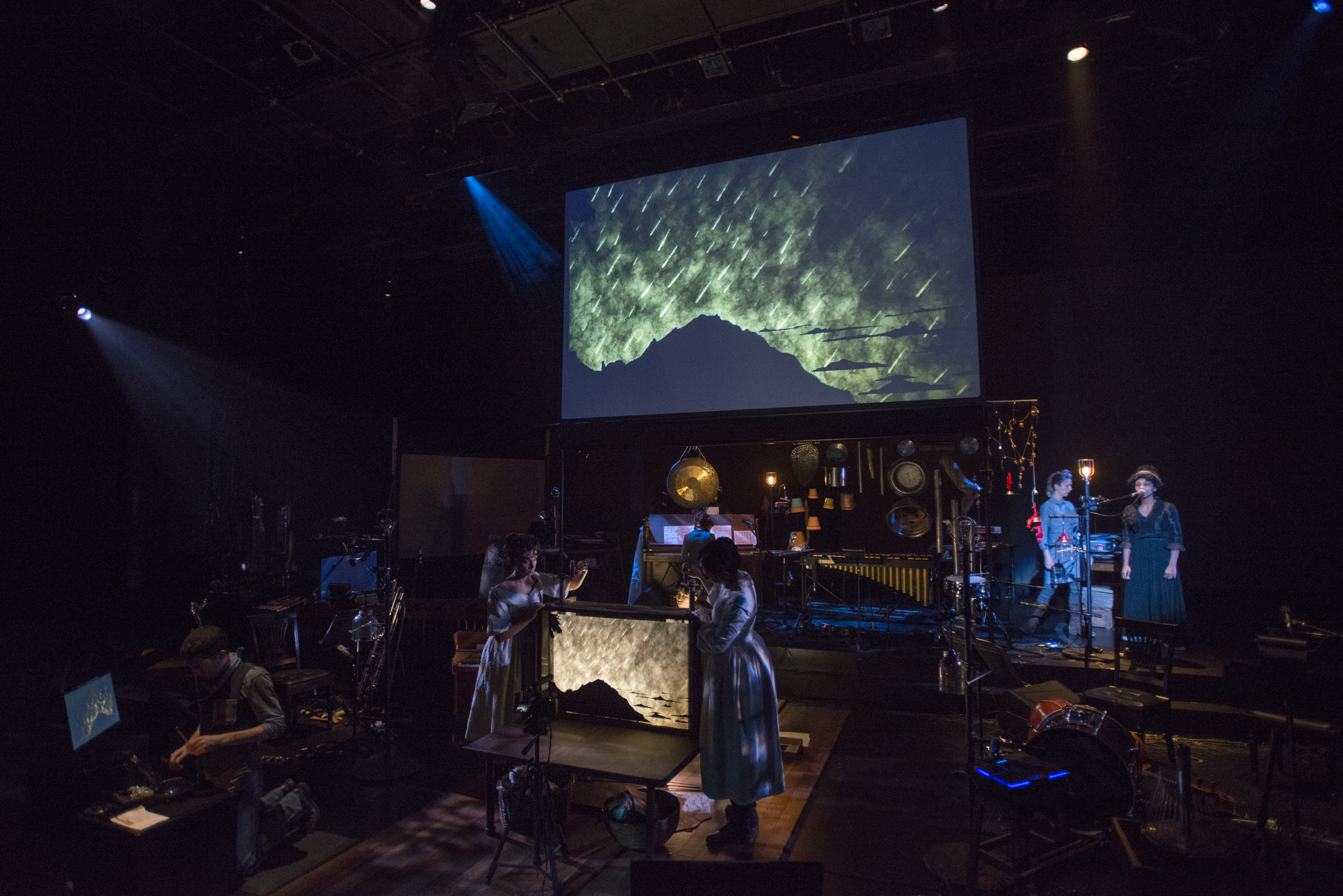 If you are not familiar with Manual Cinema’s work, the production of Frankenstein now at the Court Theatre might come as a bit of a shock. For most of a decade now, Manual Cinema has been presenting elaborate multimedia shows using such techniques as lightboxes and puppetry. Watching a Manual Cinema show is akin to watching a silent movie being created right before your eyes. Everything is visible: the actors, the various light stations, the puppetry (both two and three dimensional), the musicians (four of them, right onstage with everyone else), even a place to the rear where actors perform quick costume changes. Manual Cinema tells stories in an exciting, inventive manner using old-fashioned techniques, and is utterly transparent while doing so.

The result is that you are able to focus anywhere you wish in one of their shows: watch the large screen if you want, where you’ll see all of the work come together. Or watch where the puppeteer/actors are playing the scene that is being filmed in front of you. Or watch another place onstage where someone is getting ready to show another bit of action. Or you can watch the musicians create the soundtrack live. It doesn’t really matter: the production is thoroughly entertaining no matter what you are looking at.

This is the third of four independently planned versions of Frankenstein to be produced in Chicago in this, the 200th anniversary year of Mary Shelley’s novel. It is very ambitious in its storytelling, combining the circumstances under which Shelley wrote the book (a contest of “ghost stories” with her then-boyfriend Percy Bysshe Shelley and Lord Byron while vacationing in dismal weather in Geneva) with the story she concocted. Shelley, her husband and Byron are characters portrayed by actors. Victor Frankenstein, his father, and his foster sister/fiancée Elizabeth are as well. And the Creature is portrayed in various scenes by an actor or a puppet.

The compelling Sarah Fornace (Co-Artistic Director of Manual) plays both Mary Shelley and Dr. Frankenstein, and she’s hard to take your eyes off of: her bold facial expressions (this is a live silent movie after all) and movement both bold and subtle make her a fascinating lead. Julia Vanarsdale Miller portrays the Creature with deep sadness and darkness brought on by its mistreatment at the hands of others. She also portrays Elizabeth. Sara Sawicki is Alfonse Frankenstein, Victor’s father, and she's often very funny. Percy Shelley and Caroline, Victor’s mother, are both played by Leah Casey, who is as marvelously funny as the former as she is full of pathos as the latter. Other roles are played by Myra Su, another narrative artist who specializes in telling stories through puppetry. These five women are in turn onscreen and behind the scenes working the puppetry that is the real magic here, while Peter Ferry, Zachary Good, Deidre Huckabay and Lia Kohl play all sorts of instruments to fill the show with music.

Fornase, Miller and co-Artistic Director Drew Dir are credited with devising this production, and it certainly is a brilliant design. They mimic Shelley’s novel by telling the story from multiple perspectives and are highly successful in recreating a most complex narrative, though I did feel at times that my prior knowledge of the text aided in my comprehension of what was going on. (There are nuances that silent films simply cannot convey.) My husband, who has not read the novel, did have a hard time following the plot. And I did have the same complaint that I had with Remy Bumppo’s otherwise excellent version—that the story is so complicated that it tends to temper the emotional investment of the audience. (Something about the intentional separation from reality of puppetry and being able to watch cool things being created does make that more forgivable, though.) Be all that as it may, this show should be a huge hit for Court and Manual. It is impressive in scope and execution, entertaining, and (especially if you’ve never seen Manual Cinema before) absolutely fascinating to watch. The opening night audience was entranced, and I have no doubt you will be as well.

Frankenstein is a Manual Cinema production now playing at Court Theatre, 5535 S. Ellis, Chicago, through Dec 2. Check the website for specific dates, times, and tickets. Find more information about current plays in our front page recs and at theatreinchicago.com.