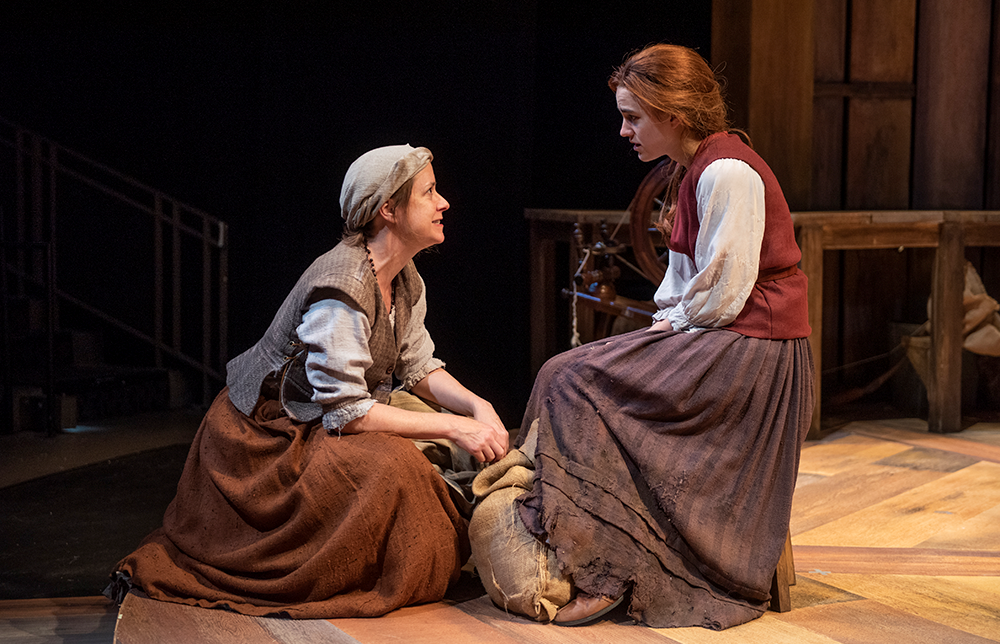 I have never wept so copiously – before or after any film – as I did in 1948, sitting next to my young Catholic girlfriend at the climactic moment of Joan of Arc, starring Ingrid Bergman. In our early adolescence, both of us identified with Joan and were shattered by the pain, horror,  and injustice of her fate.

Then, we identified with Joan, and now — 71 years later, responding to a brilliant play by Jane Anderson–  we have reached the maturity to identify again, but this time with the angst of Joan’s mother,

Anderson does an amazing job of humanizing a myth – beginning with the expected conflict between teen and parent. But if this is an unusual teen, it is also a story of a unique parent – able to accept what would at first seem impossible: her child’s mystical experience with visions of St. Catherine.

Isabelle Arc (Kate Fry) is a very humble, pious woman who has raised her daughter Joan (Grace Smith) in her own vivid belief. While she can accept Joan’s visions, she begins to balk when she realizes what the Saint has asked of her daughter – no less than to lead the armies of France to victory over England. The father (Kareem Bandealy) is more skeptical at first but comes around following the reassuring words of their priest, Father Gilbert (Richard Gutierrez).

Act I is often light in tone, setting up the family relationships – not so different from the sparring worlds of teens and parents now. Act II is much darker. Joan has cut her hair, donned men’s clothing and left home.  Time has passed and now Isabelle has walked 300 muddy, difficult miles to see her daughter.

The scene opens as she confers with “A Lady of the Court “ (Penelope Walker), a highly contrasted mother.  This superficial lady offers to bathe Isabelle’s feet without ever knowing her heart. She has two daughters – who we never see – but learn of their spoiled, self-centered ways. The two mothers could not be more different. It is a brilliant juxtaposition.

Isabelle, after waiting to see her daughter, determined to “give her a piece of her mind,” becomes stunned at the transfixion before her eyes – Joan’s metamorphosis from a country farm girl into a shining knight, a religious tool of history – or more likely, a fanatic tool of politics.

Everything from this point spirals downhill. Joan is wounded. Then she is kidnapped. The enemy imprisons, tortures and ultimately sentences her to burn at the stake if she will not recant her “heresy” to the British Court.  The French will not ransom her.

Her family is helpless. Prayers are not enough. What can her mother do? Even though Isabelle goes against her own beliefs to save her daughter’s life – and advises recanting — she is speaking to one unable to betray her beliefs. Joan has transformed from a real girl to a saint.

The last words of the story do not belong to Joan, who has been carried out screaming for her mother. They – like the words of the opening – continue and close the mother’s narrative about having this exceptional child.

In looking at this history from an oblique angle, another point of view, playwright Anderson has brought new insights.

After Joan’s death, Isabelle made it her life’s work to overturn the trial that had sealed her daughter’s destiny – to restore her good name. She succeeded in 1456 when she was declared innocent and 456 years later, in 1920 was canonized. Fry’s depiction of this dedicated, intrepid mother skillfully interweaves her humanity and courage. She was a woman made of steel – “the last one standing!”

No mother in the Northlight audience could think it was worth it. Mothers, holding their newborns in their arms, pray for their health, their happiness, and their normalcy, not their genius or ultimate martyrdom. The audience sat transfixed at the end. Anderson has captured the universal within this very special, memorable history.

This time, I did not weep. The pain was too deep for tears.

MOTHER OF THE MAID  is now playing at Northlight Theatre, 9501 Skokie Blvd, Skokie. Check the website for specific dates, times, and tickets. Find more information about current plays in our front-page recs and at theatreinchicago.com.

One thought on “Mother of the Maid: The agony of parenting”