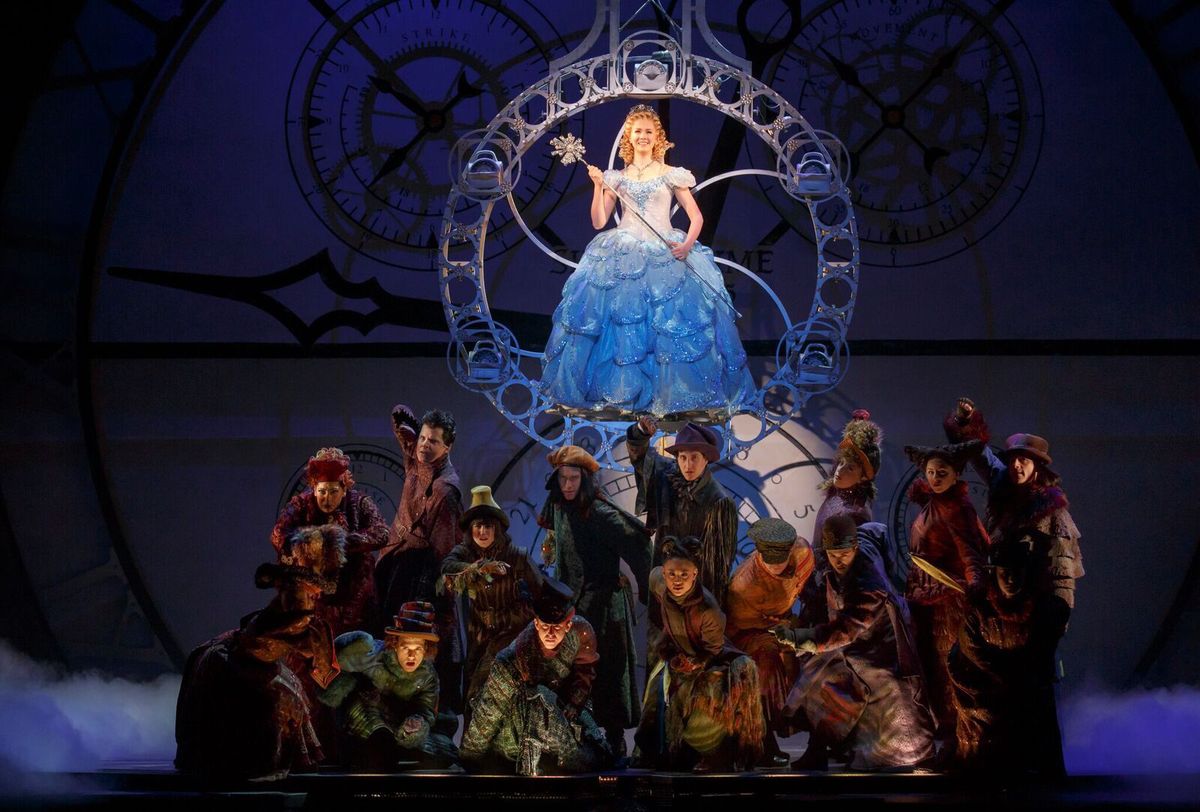 The first time I saw Wicked was on its initial Chicago run in 2005 with Ana Gasteyer as Elphaba and Kate Reinders as Glinda. The musical, though straying significantly from Gregory Maguire’s novel, proved to be an incredible achievement in its own right: the costumes, the flying monkeys, the infectious Stephen Schwartz songs, the towering sets of clock gears, the soaring, triumphant moment when Elphaba “defies gravity” at the end of Act One, even the outrageously goofy Wizard of Oz machine all worked to transport not just my children but me into this land of talking animals and magical witches.

I never suspected at the time that it would be more than a decade before I saw this wonderful show again.

The great news is that, in its current incarnation at the Oriental Theatre with Mary Kate Morrisey as Elphaba and Ginna Claire Mason as Glinda, the show has not lost any of its magic or its charm. To be honest, I have no clue how much of what we are seeing is the original staging. Much of it is, I’m sure, as it is recognizable even after all of this time, but there could be new twists that director Joe Montello has added along with Wayne Cilento’s staging; it’s simply been too long for me to recall. All I know for certain is that it works. From start to finish, every lighting flourish, every use of fog, every bit of choreography, every comic and powerful moment come together to tell this familiar story.

It isn’t just what you might think it is, though. It is the tale of a girl who, branded as an outsider by the color of her skin, discovers a hidden talent. In her efforts to use it for good, she discovers that the (white male) leader of her land is a brazen phony who is doing harm rather than good, but when she tries to expose him he instead uses the old discrimination against her, easily corrupting the opinion of the citizenry. He goes so far as to have her sister killed and her lover tortured, eventually nearly turning her into the very thing he claimed her to be. This is the story as Maguire reconceived it and as Wicked tells it; it fits pretty well into our political moment, doesn’t it?

In this version of Wicked, Morrisey is an outstanding Elphaba, garnering sympathy from her very first appearance in the hideous clothing her nasty father has put her in as he openly favors her sister NessaRose (a lovely Catherine Charlebois in a winning performance). As every fellow student at Shiz University shuns her and makes fun of her “greenified” appearance, we are treated to a small taste of what her life must have been like. As early narrator Glinda says, it can’t have been easy. She arrives at Shiz a caustic, hardened, determined young woman who believes that if she can make something of herself through her studies then maybe her father will finally recognize something good in her. The play is as much about friendship as it is about politics, and Elphaba’s relationship with Glinda is wonderful to watch. From their opening number in which they declare their mutual “unadulterated loathing” for each other to the moment when Glinda realizes she has been too mean to the green girls and needs to change her ways to help her become more “Popular” to the complications of their later relationship that leaves the icon of Good and the icon of Wickedness in Oz as best friends who can sing, “Because I’ve known you, I have been changed for good,” this friendship is at the center of everything that happens. That Glinda must ultimately pretend it doesn’t exist is heartbreaking, and Mason is brilliant, especially at the beginning and end of the play, at showing her mixed emotions to the audience while we know Glinda is hiding them from the Ozians.

Another standout performance is Tom McGowan’s Wonderful Wizard of Oz, that duplicitous Kansan scoundrel who seeks to use Elphaba’s power because he has none of his own and who is, in this adaptation, a much darker version of the snake oil salesman that he was in the 1939 movie. McGowan has a great solo moment in the song “Wonderful” that comes close to taking Elphaba in, gifted orator that his character is, but Oz can’t ultimately get around who he is. Judy Kaye’s Madame Morrible is also excellent: the true villain of the piece, she pulls no punches here, coming off like Ursula from The Little Mermaid in all of her smarmy charm and later vicious ugliness.

Wicked is a brilliant adaptation of Maguire’s novel. While some complained back in 2005 that book writer Winnie Holzman had changed too much, I’d argue that it was necessary: the book was awfully dark in places, and this musical needed to be friendly both to adults and to children. And it is. My children and I are both a decade older and we found ourselves moved and affected by it anew, in very different ways than in 2005. Wicked is one of the best shows you’ll ever see. Period. It is funny, poignant, and emotional. It teaches lessons both personal and political. It is visually and musically brilliant. You won’t find a way to have a better night at the theatre.

Wicked is now playing at Oriental Theatre, 24 W. Randolph St, until January 21.  Tickets are available from Broadway In Chicago. Find more information about current plays on our Current Shows page and at theatreinchicago.com.