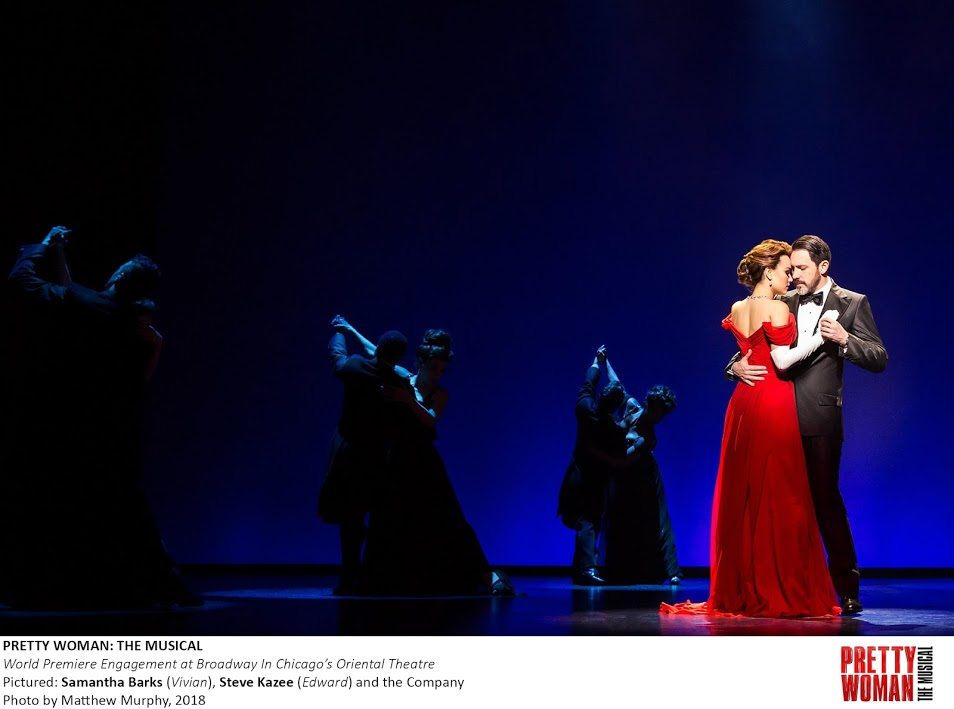 The late director Garry Marshall long had a dream of turning his 1990 movie hit Pretty Woman into a Broadway musical. The result, for which he and original screenwriter J.F. Lawton wrote the book, is having its world premiere at Chicago’s Oriental Theatre, and I’m happy to report that it works brilliantly. From the original songs by Bryan Adams and Jim Vallance to the stellar cast to the ace design team, this is one Broadway tryout where the creators got it right: from start to finish this is a sensational show, with a plot that has been somewhat modified for our more enlightened, feminist era.

All of the key moments from the film are here: the unintentional meeting of the protagonists, the wonderfully droll hotel manager, the restaurant scene, the Rodeo Drive shopping scene, even the final three-story fire escape climb. If you are a fan of the film—and why else would you be here?—you will not be disappointed. But for those who may not have seen it: the plot is a combination of the Cinderella story and the archetypal hooker with a heart of gold. Vivian (the brilliant Samantha Barks, Eponine of the “Les Miserables” movie) plays the latter, and Steve Kazee (of Broadway’s Once) plays her benefactor, business tycoon Edward Lewis, a billionaire who makes his money not by building things of his own (a point driven home at least five times during the show) but by buying failing companies, tearing them apart, and selling their assets. As their week-long business arrangement plays out, Edward and Vivian find themselves surprisingly falling in love. Both of these perfectly cast stars are instantly likable, and both also have powerful voices with which to sing the Adams/Vallance songs, many of which will remain with you when you leave.

The opening number, “Welcome to Hollywood,” sung by an ensemble led by Eric Anderson as “Happy Man,” a kind of narrator-like character who appears throughout the show (Anderson also plays the hotel manager, Mr. Thompson), is a rollicking, high-energy piece that manages to introduce all of the characters while setting the tone for the rock-inspired music that will fill the production. Other memorable Anderson moments include “On a Night Like Tonight,” a wonderful and gayly choreographed comic pop-flavored number. Barks has her own stunning moments with songs that evoke her ongoing status change like like “Anywhere But Here,” the plaintive “This Is My Life,” and the powerful “I Can’t Go Back,” while Kazee shines in the reflective “Something About Her,” the anthemic “Freedom,” and the romantic “You and I.” The two actors also share the jubilant Act One closing song “You’re Beautiful” as well as the 11:59 number, the heartrending ballad “Long Way Home.” Altogether, these three main players account for most of the songs in the show, and if you add Vivian’s hooker friend Kit (a powerful Orfeh, the one-name actress who originated the character Paulette in Legally Blonde), then you cover almost all of the rest. (Her “Rodeo Drive” is just wonderful, as is the song she shares with Happy Man, “Never Give Up On A Dream.”) The opera scene, in which Barks is able to show some strong emotions without words, is a showcase for soprano Allison Blackwell (though it seems a bit random in its blocking, an unusual error for director Jerry Mitchell, who is mostly brilliant). There is also a great scene-stealing turn by Tommy Bracco as the ubiquitous bellhop Giulio.

But the bottom line is that this is a star-making vehicle for Barks. From her first appearance (fleeing her landlord on that fire escape), she commands our attention. Marshall and Lawton have wisely updated her character to fit better into a post-#metoo world: in this incarnation of Pretty Woman, she needs rescuing less than her Mitt Romney-like cohort. While he blindly drones his way through business deals, living an empty life with no clue about the many people he puts out of work, she seems at home in any situation, adapting with ease to a Beverly Hills lifestyle while managing to get her new lover to change his entire life in a week. And she even knows cars! Banks manages to sell this outsized hooker at every step; we never doubt her sincerity nor her emotional authenticity even in this fairy tale of a plot. This Vivian is a character who, from the start, is able to stand on her own two feet, unlike Kazee’s Edward, who seems to be sleepwalking through his life and desperately needs someone to show him how to live.

Pretty Woman’s producers, responsible for more than a dozen Tony Award-winning shows, couldn’t have assembled a better design team. With twenty Tony nominations, four Tonys, and a large fistful of Olivier and Drama Desk awards and nominations among them, this is a highly seasoned group. As choreographer, Mitchell’s inventive and energetic dances give the musical a joyful flavor, and as director he pulls some great performances from his actors as well as creating some lovely scene changes and blocking, taking creative advantage in particular of a downstage elevator through a trapdoor. None of this would have been possible without David Rockwell’s scenic design, a series of two-dimensional roll-in palm trees and drop-in Hollywood Blvd. billboards and sleazy business signs along with a couple of key sets including the fire escape and a lovely, simple suggestion of a luxury hotel suite, all lit by creative lighting from Kenneth Posner and Philip S. Rosenberg. The costumes, also, are impressive. From Vivian’s outfits to Happy Man’s eclectic ensemble, Gregg Barnes is absolutely on point. And sound designer John Shivers makes sure there is never a problem hearing the singers over Will Van Dyke’s nine-piece rock orchestra.

I suppose that one might get picky and say that some of the show’s songs blend together in style a bit too much, or that there is a bit of a “La La Land” feel to the whole thing, or that it adheres too faithfully to the movie and thus leaves no surprises—a problem common to almost all theatrical film adaptations—or that some of the staging begins to feel repetitive as the play wears on. If the producers wish to tweak it more before its Broadway debut this summer, that’s fine, and they should: that’s what out of town tryouts are for. But as far as I’m concerned, they don’t need to do too much to this potential blockbuster of a production. I honestly don’t know why a huge hit is called a smash, but I’ll go out on a limb and say that Pretty Woman is definitely going to be one. In this early moment, it already has all of the earmarks, and the opening night audience’s lengthy standing ovation suggests that I am not alone in my feelings. After some pretty weak shows lately (Love Never Dies, Escape to Margaritaville), Broadway in Chicago has brought us a dynamite production, destined to be a huge hit and fill houses for a long time to come.

Pretty Woman is a Broadway in Chicago production now playing at the Oriental Theatre, 24 W. Randolph St in Chicago, until April 15. Performance times vary; check the website . Tickets are available from Braodway in Chicago. Find more information about current plays on our Current Shows page and at theatreinchicago.com.