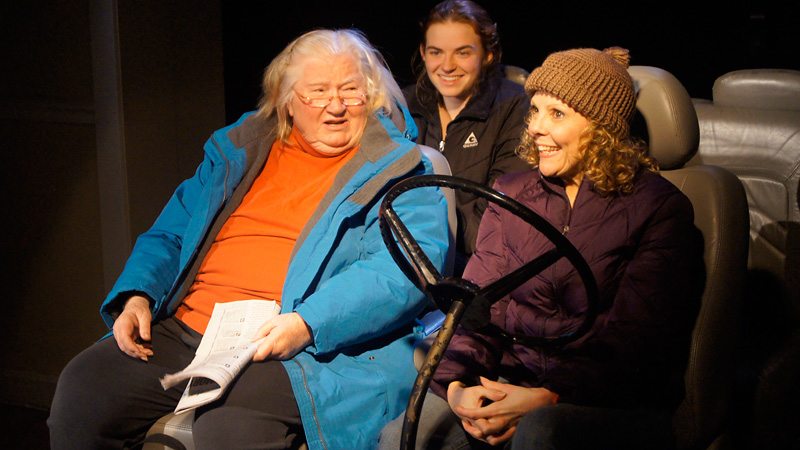 The Bunkers. The Ewings. The Bluths. The Lannisters. The Sopranos. America is fascinated by dysfunctional families; our television screens are full of them. Sometimes, as in the brutal Lannisters, the dysfunction creates drama; often, though, we find ourselves laughing at it. When we see the Peter Griffin or Nancy Botwin or Homer Simpson messing up again and again, it reminds us of how much worse things can always be. It makes us feel good by comparison to act as voyeurs into these supremely messed-up lives. It is schadenfreude at its finest: we derive pleasure from their pain. And it is in this mode that we watch Redtwist Theatre’s latest offering, the Chicago premiere of Suzanne Heathcote’s I Saw My Neighbor on the Train and I Didn’t Even Smile.

The cumbersome title of this comically provocative play derives from a repetitive non-action from one of the characters. Stuck in a dating limbo, Rebecca (Jacqueline Grandt) admits to having a small crush on a guy from her building whom she sees daily on the train. Rather than risk getting to know him, though, with its ensuing obligation to converse each day, she opts to keep her head down and not even acknowledge his presence. This risk-averse attitude has got Rebecca stuck in neutral in her life, a woman in her forties with nothing going on but a job as a bookkeeper. A year after the death of her beagle Coco, she still is in mourning because she has nothing to replace the love the dog gave her. And it has left her vulnerable to her brother Jamie (Adam Bitterman, powerful in a role foreshortened by the needs of the script) when he begs her to take in his 15-year-old daughter “just for two weeks” while he goes on his honeymoon. The fact that the girl has just been kicked out of her California school for shooting a sex video with two football players should be a tipoff that her troubles might be just as bad as Rebecca’s.

When Sadie (Emma Maltby) arrives, she brings more than the usual amount of teen baggage. Her mother has basically shipped her to her dad, and he has now pawned her off on her aunt, whom she hardly knows. And she’s been enrolled in the same restrictive school that her dad and aunt attended when they were her age, though she clings to the thought that she’ll be gone in a fortnight. At the school, she finds that, even halfway across the country, her reputation has preceded her. The girls hate her and the boys all want to get her in bed: it is a miserable existence. And it isn’t helped by coming back to Aunt Rebecca’s to listen to the bickering between her aunt and her omnipresent grandmother Daphne (Kathleen Ruhl), a woman her father hates and Rebecca barely tolerates and whose tongue is quick and caustic. Daphne has reasons for being this way (the scene in which she exposes them is Ruhl at her finest), but the bottom line is that we have three generations of dysfunctional women, for all intents and purposes, under one roof.

I Saw My Neighbor is an opportunity for these three actresses to strut their stuff. All three characters go through a lot in the brisk 1:45 (without intermission) of the play, and each actress is put through her paces. Maltby, in her first major role, proves to be quite a find. Not only does she play the angst inherent in her part perfectly, but the script allows her opportunities to find very different levels as well. Playing opposite nerdy math geek Eric (Joshua Servantez), for example, Maltby allows her softer side to sneak past Sadie’s tough girl veneer as the boy endears himself to her. Later, in the span of a single scene, she is called upon to throw a full-out onstage tantrum, segue into the role of seductress (with Paul, played by John Blick, who came to see her mother), and then collapse from illness; that she is able to pull off all three with utter realism in such a short span of time is a testimony to this young performer’s strength.

She needs it, too, acting opposite Jeff Award-winners Grandt and Ruhl. Grandt, too, has her emotional breakdown scene, but it is in a much quieter moment that she shows the depth of Rebecca’s loneliness. With Sadie instructing her, Rebecca is talked into trying her hands at Tinder. Grandt imbues her with a pure, naïve joy at the app’s simplicity and how well it “works,” that speaks volumes about the woman she is playing: she needs to believe in these connections even when (like the man who needs to meet her in his car because he’s still living with his ex due to apartment troubles) there are issues that would be totally obvious to anyone who was not so oblivious. As to Ruhl, her character masks any pain she might feel in caustic humor at others’ expenses and drinking whiskey. In the one scene in which she is stripped bare, though, a sudden and unfeeling shift from her granddaughter causes her to lose all composure; Ruhl’s breakdown is a remarkable piece of acting that she keeps consistent with the specific hidden vulnerabilities of the character she has created.

This is a very funny play even though my descriptions may not have sounded all that funny. Schadenfreude, remember? We laugh at their dysfunction while rooting for them to find some way past it. That is what happens in the best plays of this type, and this is indeed one of them.

I Saw My Neighbor on the Train and I DIdn’t Even Smile is now playing at Redtwist Theatre, 1044 W. Bryn Mawr until December 18. Performances are Thu, Fri, Sat, 7:30 pm; Sun, 3 pm. Tickets are $30-40 and are available from Redtwist Theatre. Find more information about current plays on our Current Shows page and at theatreinchicago.com.