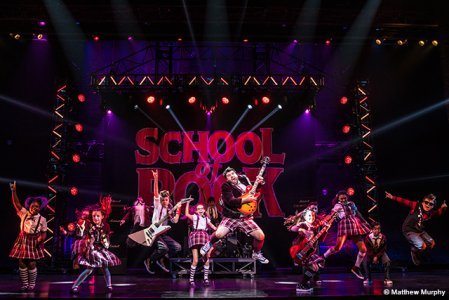 When we first see Horace Green Preparatory School in Andrew Lloyd Webber’s take on the Jack Black movie School of Rock, its children are singing a school song that says, among other things, “Nothing will shake these ivy walls.” With or without seeing the movie, everyone in the audience knows irony when they hear it: they have already met Dewey (Rob Colletti), a guitarist with a dream but no drive who has just been kicked out of the band he formed just weeks before the huge Battle of the Bands that is all he has been waiting for. And they know that he is just about to pretend to be his friend and housemate, Ned Schneebly, a long-term substitute teacher, so he can make money to pay his rent. Did those kids say “nothing”? They’ve never met Hurricane Dewey.

The biggest problem with School of Rock is that it takes far too long to set up that complicated premise. We are halfway through the slow-paced first act before Dewey (now Mr. Schneebly) enters the school to wreak his particular brand of havoc, and even longer before he realizes that the children in his classroom have musical talent. In short, we’re about a quarter of the way through the play before we hit the famous number that defines its plot, “You’re In the Band,” and things really start to, well, rock. From that point on, this is a powerful, high-energy, captivating show; it just takes too long to get there.

Colletti is a whirling dervish of onstage energy: aside from a few moments when the script calls for him to be collapsed in his bed, he almost never stops running, jumping, playing, singing, dancing, jumping onto and off of furniture, and otherwise expending adrenaline. His energy is both contagious and infectious: not only does he win over the “lockstep” students of his class, including Summer (Ava Briglia), the “Hermione” of the group, but he eventually wins over the staid, prissy, emotionless principal (an amazing Lexie Dorsett Sharp, who has a powerful and emotional solo in Act Two) as well. (Their love affair is one of the most unrealistic aspects of the play, but the whole thing is a fantasy, so who needs realism?)

One aspect, though, that seems utterly and sadly realistic is the lack of attention some of these children receive from their (sometimes) well-meaning parents, who think they know what is best for their kids without ever consulting them on what their dreams might be. “I’ve got so much inside,” several of them sing in one of the most poignant songs of the musical, “if only you would listen. Joy and anger and pride, if only you would listen! It’s not much I’m asking; I only want your ear. Yeah, I promise one day I’ll make you hear.” Their pain and the anger is utterly palpable, and suddenly the silly scenario we are being shown—a faux substitute teacher replacing prescribed lessons with rock band rehearsals—takes on a new meaning: it is a way for these too-tightly-controlled kids to spread wings they didn’t even know they had.

Of course, a lot of this show is not realistic (starting with the notion that Schneebly could get all of those rock instruments into the school with no one noticing and have kids playing them at concert volume with only a few complaints that, oddly, never draw the principal to his room to investigate). And of course, given that its topic is rock and roll vs. the tightly wound world of academia, you can imagine who gets skewered. Schneebly is not exactly the favorite among his fellow faculty members, but in one telling moment we discover why: “Here at Horace Green, we groom achievers, keep them focused, minimize their quirks, / Schneebly hits the scene, they smile! Laugh! Beam! Who knows what he does, but God, it works. / Here at Horace Green, we have a system, which we keep to, as we’re told we should, / think what it would mean to do things his way, maybe we too would do some good!”

If all of this started out as an attempt by Dewey to make some cash (and at the same time to “stick it to the man”), he gets emotionally caught up in it when he realizes how much these kids need someone like him to set them free. And right there is the play’s central conflict: who exactly is Dewey/Schneebly doing this for anyway?

Aside from the main adults, it is the kids who absolutely steal this show. Briglia is a force as the overachieving Summer. Watching Theodora Silverman make “bassist faces” was such a hoot that it nearly overshadowed the immense talent the young girl has on the instrument. Theo Mitchell-Penner’s Lawrence is clearly a mini-Dewey in his social ineptitude as well as his love of the music (though his keyboard talent may well outpace his leader’s guitar playing). Phoenix Schuman’s Zack, the band’s lead guitarist, shows his loneliness and pain as powerfully as he wields his axe. And Freddy (Gilberto Moretti-Hamilton) can already play his kit twice as well as most rock drummers I know. The fifth of the “If Only You Would Listen” group, Tomika (Gianna Harris) has a powerful talent that I can’t reveal here because it comes as a surprise in the play, but it’s worth waiting for. These kids are honestly so good that, when I saw a couple of them in a restaurant after the show, another member of my party suggested we get autographs. (We didn’t.) And if they weren’t already good enough, some amazing and exuberant choreography by JoAnn M. Hunter just makes them even better.

School of Rock may start out very slowly, but once it gets going it passes every test on the strength of a tremendous cast of adults and kids. It is well worth the evening out.

School of Rock is now playing at the Cadillac Palace Theatre, 151 W. Randolph St, until November 19. Tickets are available from Broadway in Chicago. Find more information about current plays on our Current Shows page and at theatreinchicago.com.