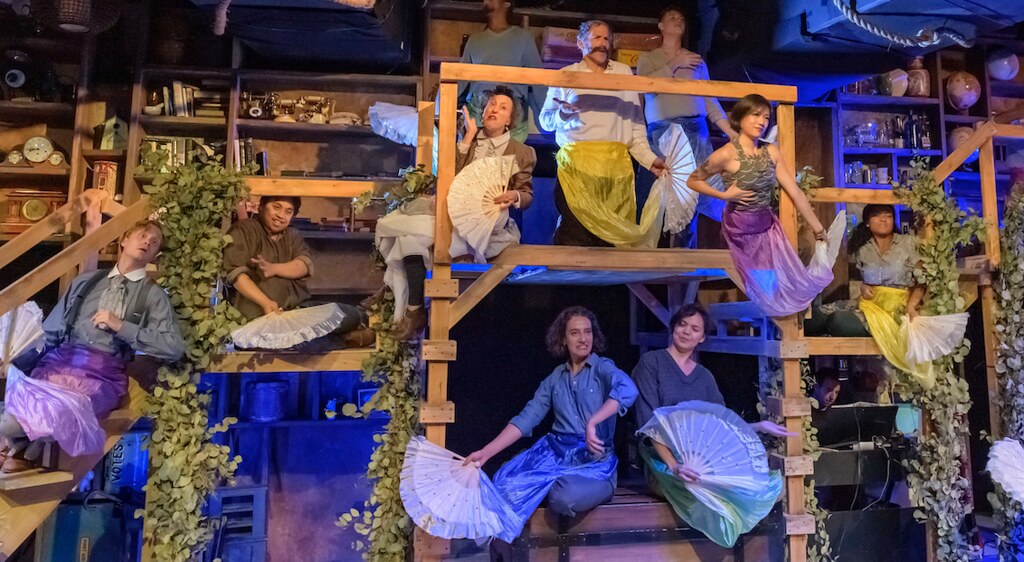 Many of us can remember watching the Peter Pan musical with Mary Martin (and later Sandy Duncan) in the title role in our childhoods. J.M. Barrie’s story of the boy who wouldn’t grow up has, over the years, spawned a whole cottage industry of remakes and spinoffs including comic books, novels, movies (most recently Pan), video games, and just about anything you can dream up. Rick Elice’s Peter and the Starcatcher is a prequel to the Barrie tale, attempting to explain just how some of the things we have always known about Neverland (mermaids, a giant crocodile, a boy who can fly, etc.) may have come to pass. I enjoyed this play when I saw it in New York, so I was definitely looking forward to seeing it again closer to home.

In some ways, Citadel Theatre’s production of this unusual play works very well, but it also shows off some of the problems with the script that are more glaring in this very intimate space (not that the theatres in which it played in NYC are huge). Director Jeremy Aluma instills in his very talented cast a strong sense of the kind of playfulness needed to make this play (or indeed any in the Peter Pan genre) work. It’s fantasy, of course, but it’s rowdy, action-filled, and ultimately absurd fantasy. It takes a strong ensemble to make it work, and Aluma has found one.

Act One begins (once the ensemble has settled itself onto the stage) with the tale of two of Her Majesty’s ships, the fleet Wasp and the more plodding Neverland, each sailing for the remote country of Rundoon. The basic plot of the play involves the cargo that they carry: the Wasp is to transport a mysterious chest belonging to the Queen herself, which to be guarded by Lord Aster (Christian Edward Cook), while the sinister Captain Slank (Dekyi Rongé) of the Neverland has conspired to replace it with one filled with sand and take the treasure (the nature of which is one of the play’s secrets) for himself.

In the hold of the Neverland, Slank keeps three young orphan boys—Ted (Daniel Gadaj), Prentiss (Jason Goff), and one boy who declares that he has no name (Jayson Lee)—whom he has purchased for his own nefarious purposes. They are discovered and befriended by Aster’s daughter, Molly (Mariah Copeland), who is traveling separately from her father. Molly is being trained by her father to be a Starcatcher, a member of a very small group of people whose mission in life is to protect Starstuff, a mysterious and magical compound that comes from the stars themselves, from falling into the wrong hands.

Meanwhile, the Wasp has been taken over by pirates led by Black Stache (Adrian Danzig) and his first mate, Smee (Scott Ray Merchant), who are none too happy to discover that the treasure they seek has been purloined by Slank and determine to get it back for themselves.

The complex first act plot, which not only has to establish the many characters and their missions as well as the overall silly tone of the play, but also includes a dramatic ship chase across the sea, fighting, and a shipwreck that leaves the Neverland in pieces to wash up on a convenient island, makes the act too long and too busy; you’ll be forgiven if you enter intermission a bit overwhelmed by everything the play is throwing at you. The play’s second act, which takes place entirely on the island, is far more structured, and by the time that singing mermaids (great costumes by Madeleine Byrne) open the act we have realized that we are now catching up to Barrie’s story, so we are on more familiar ground. Since we have a much better sense of where the story is going, Act Two feels more comfortable and focused.

This production of Peter and the Starcatcher is played on a multi-level set (designed by Eric Luchen) made of exposed wood and platforms, areas of which stand-in for the various locations we travel to during the play. It’s a very busy set filled with lots of fun-looking items, and props designer Lacie Hexom deserves a shout-out for putting it all together. Aluma has a great time using every square inch of the set as the cast members joyfully scamper all over it or suddenly appear from behind a curtain, though there are several times when actors have to duck to avoid low-hanging structures.

The acting ranges from quite good to excellent, and Danzig makes a wonderfully effete Black Stache (whose sinister nature intentionally pales next to Rongé’s slimy Slank) while Merchant has tons of fun as the needy pirate second-in-command. The three boys and Molly are also particularly well played by fine young actors (each child’s personality is very carefully crafted), as are Molly’s nanny Mrs. Bumbrake (Rebecca Fletcher) and her odd love interest, Alf (Dave Honigman).

Aluma’s direction creates some really enjoyable bits, including a full-stage mermaid party, a huge crocodile basically made of two green umbrellas, a frightening shipwreck, and lovely moments of “flight.” Choreographer Breon Arzell and fight choreographer Jaq Seifert help on several of the major sequences. In addition, Jon Schneidman’s fine musical direction (and musicianship) is clearly evident in the mermaid song and other key places.

Peter and the Starcatcher is a solid addition to the Peter Pan cosmos, though Elice might have been well advised to edit the first act both for time and tightening. This Citadel version will probably appeal to fans of silliness and broad characterizations, and it’s certainly interesting to give these well-known characters their own backstories. It’s an uneven play, but everyone involved has a lot of fun putting it on and it shows.

Peter and the Starcatcher is now playing at Citadel Theatre, 300 S. Waukegan Rd, Lake Forest through Sep 29. Check the website for specific dates, times, and tickets. Find more information about current plays in our front page recs and attheatreinchicago.com.