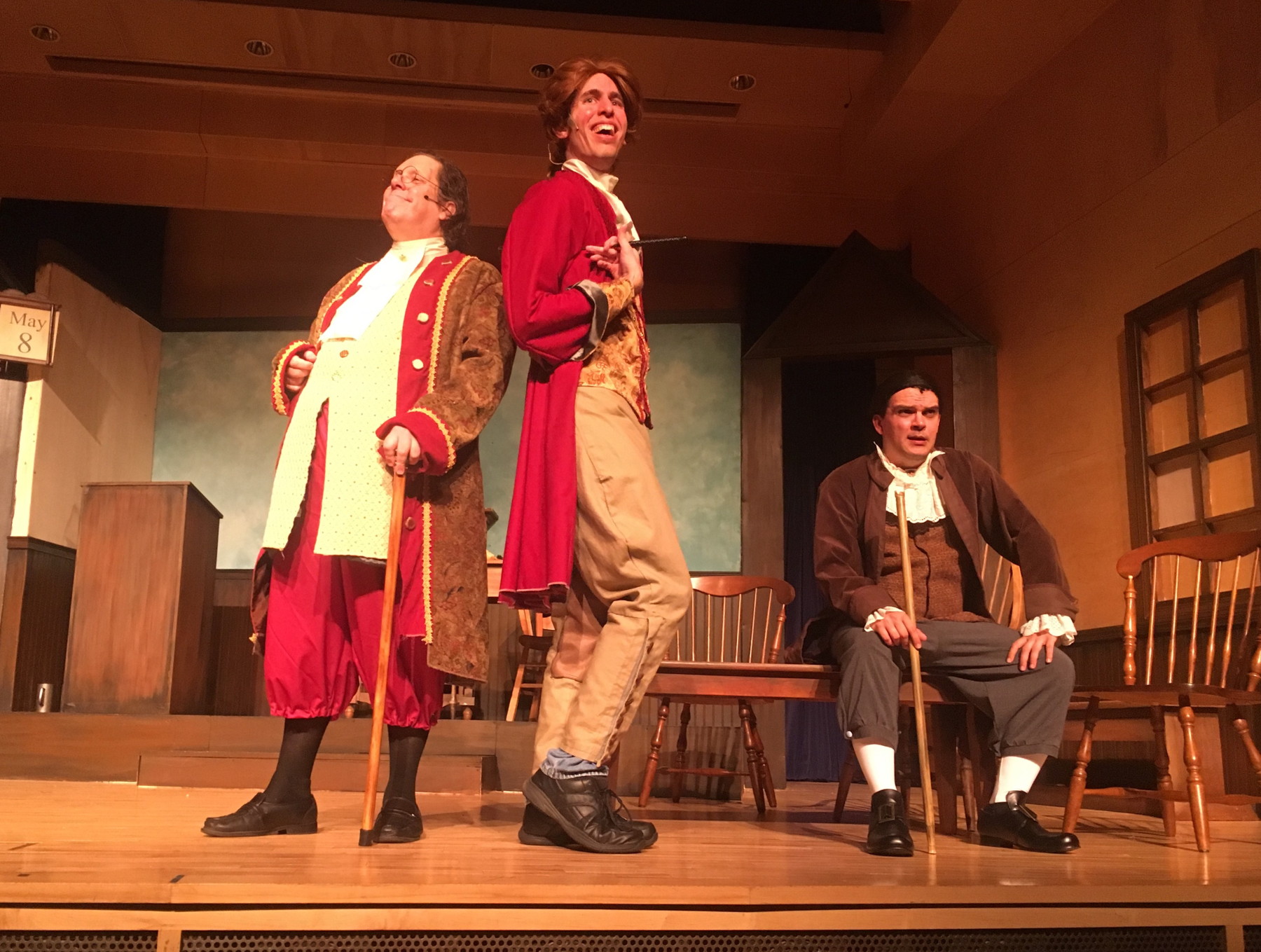 What better way to celebrate the 4th of July could there be than attending a production of 1776, the 1969 Tony Award-winning musical about the signing of the Declaration of Independence? This is especially true when it is a good production, and director Wayne Mell’s MadKap Productions version, now playing at the Skokie Theatre, is strong in just about every way.

The musical, a fictionalized account of meetings of the Continental Congress in the early summer of 1776 that led to the vote for independence, stars Sean Michael Barrett as John Adams, then a congressman from Massachusetts, who leads the charge to make our country free. Historically, Adams had help with this endeavor, but then historically he was not the “obnoxious and disliked” man that playwrights Peter Stone and Sherman Edwards make him out to be either. (That characterization derives from a phrase penned by Adams himself nearly forty years later, and goes against recorded contemporaneous opinions.) Still, Barrett makes hay from the basic depiction, leaning heavily on this outspoken, obnoxious nature of his character throughout the production and practically channeling William Daniels’ Broadway and film turn in a fine performance.

Equally adept is Edward Kuffert as Benjamin Franklin. Kuffert is in fine form as the affable inventor, statesman and philosopher, completely at home quipping those aphorisms for which Franklin is famous while managing to create a fully realized character, the only one in the congress who can really stand Adams. Other standouts include Sean Caron as John Dickinson, the Pennsylvania delegate who is portrayed here as Adams’ primary antagonist; Jeffrey Luksik, in outstanding voice, as South Carolina’s Edward Rutledge; Gretchen Kimmeth as Abigail Adams, as sweet as her husband is objectionable; and Emily Ann O’Brian as an endearing Martha Jefferson. Richard Salon, Andrew Buel, Justin Smith and Joe Lewis also turn in solid performances in what is a pretty deep and entertaining cast.

Mell’s direction and use of the aisles as additional acting space extend the standard static assembly hall set nicely and provide some variety, especially during the very long (90 minutes) first act. This is a musical that includes long periods of dialogue, one of them about half an hour between songs, and I did think more than once that it could do with some editing, but it won a Drama Desk Award for its book, so what do I know? More bothersome is the fact that Mell opted to go with canned instead of live music, a choice that proves detrimental, especially on the several occasions when songs stop and start again.

Still, the whole point of 1776 is to commemorate Independence Day while simultaneously humanizing the characters of the Founding Fathers instead of merely placing them on a pedestal. Watching them struggle with the very real issues, not all of which are political, that face them as they attempt to craft the document that will enable a new country to be born is like watching our history come alive. The play doesn’t strive to be deep or metaphorical at all; it simply wants to recreate perhaps the key moment in American history: the quest for freedom. As we limp through yet another year in which many of our freedoms are under fire, it’s well worth remembering why the USA exists in the first place.

1776 is now playing at Skokie Theatre, 79243 Lincoln, Skokie through 7/21. Check the website for specific dates, times, and tickets. Find more information about current plays in our front page recs and at theatreinchicago.com.