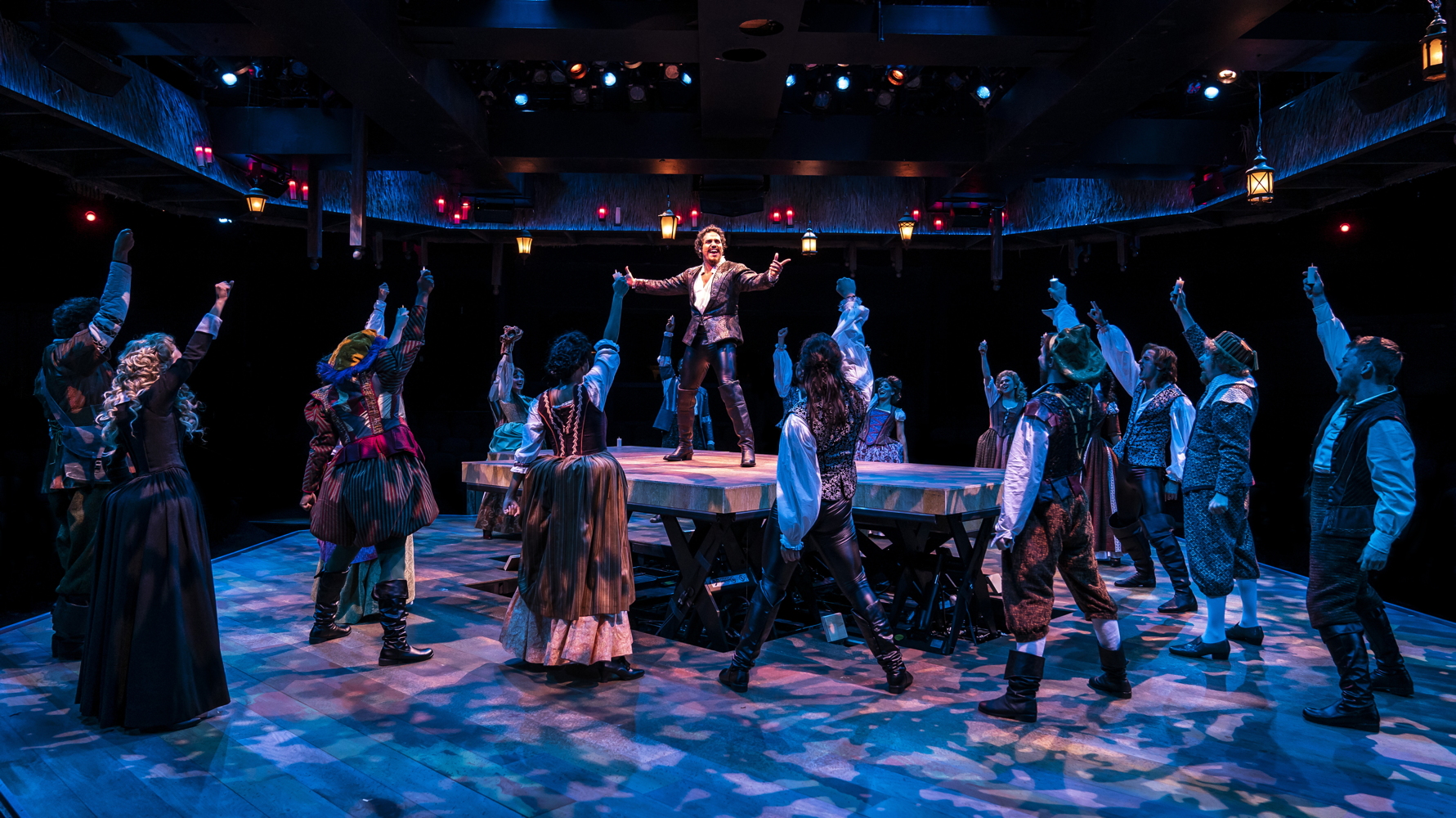 There are a few things you can always count on when you see a musical at Lincolnshire’s Marriott Theatre. There will be a great cast, all of whom sing and dance wonderfully. It will be brilliantly directed by someone who understands how to get the most out of Marriott’s theatre-in-the-round stage, where the entire audience is close to the actors. The choreography will be crisp and original. And finally, you will be thoroughly entertained. Depending on the show, you might also laugh yourself silly, and that pretty much defines the experience of Marriott’s latest offering, Something Rotten.

The 2015 play, written by Karey Kirkpatrick, Wayne Kirkpatrick, and John O’Farrell, is a comedic paean to the entire genre of musical theatre. Its premise is that, in Elizabethan England, a couple of playwright brothers named Nick and Nigel Bottom find themselves desperately trying to compete for attention with the rock star of the Renaissance, William Shakespeare, who is fresh off his biggest hit yet, Romeo and Juliet. Nick is so frustrated about always being overlooked that he hires a soothsayer to predict what the Next Big Thing in theatre will be and discovers that it will be something called musicals. In the wonderful tour de force number “A Musical” that features loving homages to all sorts of modern musicals from Annie to The Music Man to Cats, the soothsayer explains that, in this kind of play, actors simply start singing out of nowhere, which Bottom thinks is ridiculous. He also tells him that Shakespeare’s biggest hit ever will be a play he mistakenly calls “Omelet,” which Nick ends up determined to write and direct–in this new musical form–before the Bard ever can.

A lot of the fun in this play comes from the actors playing Nick Bottom and Shakespeare, and director Scott Weinstein has a couple of fine ones in KJ Hippensteel and Adam Jacobs. Hippensteel is likable as the frustrated Bottom even when he is giving in to his darker angels and trying to steal from the Bard. His extended dream sequence, “Bottom’s Gonna Be On Top,” is one of the highlights of the play. As to Shakespeare, Jacobs has the panache to play the superstar persona that the authors have created, a man utterly enamored of his own ability and the way it makes the public adore him and yet frightened that the pressure of making the next play as good as the last one will destroy him. Worried that Bottom might actually have something that could outdo him, he disguises himself and joins the brothers’ company, hoping to take the idea and use it himself. (Apparently, literary thievery is rampant in the Renaissance.)

Alex Goodrich is perfect as Nick’s brother Nigel, the one with the romantic soul and the poetic talent who finds himself in love with Portia (Rebecca Hurd), the daughter of a leading Puritan minister (Gene Weygandt). Brother Jeremiah wants nothing better than to close the theatres down and eliminate their immorality once and for all. (Men putting on dresses and pretending they are women? Heavens forfend!) Weygandt is hilarious as Jeremiah, who can’t seem to stop making sexual double entendres, while Goodrich and Hurd have such a real spark together that their scenes, though too often sadly brief, are a joy.

Also a pleasure is Cassie Slater’s performance as Bea, Nick’s loving wife, who sees the flaws in her man but is willing to do whatever she can to make their lives work. Ross Lehman has a great time as the soothsayer, Thomas Nostradamus, while Jonathan Butler-Duplessis shines as a character called the Minstrel, who acts on occasion as a kind of musical narrator. Steven Strattford (is that a perfect name for this show or what?) is a theatre-loving Jew named Shylock (who tells Bottom that Shakespeare has promised to name a character after him), and Terry Hamilton makes the most out of the two smaller roles he plays.

Weinstein and choreographer Alex Sanchez have also worked extensively with the ensemble to generate strong performances even within the dance sequences. The entire ensemble sparkles, but especially notable is Sawyer Smith, who makes the ensemble role of Robin, the member of Bottom’s company who plays all the female parts, into something comically memorable with perfect movements and facial expressions.

Something Rotten, with its clever send-ups of Shakespeare, history, and many of the notable conventions and iconic choreography of musical comedy, is simply one of the most joyful shows I know, and Marriott’s top-notch production makes it even better. If you love musical theatre and Shakespeare, you will love this show. It’s even merrier than the Wives of Windsor and far sillier than A Comedy of Errors, and it contains the most uproarious Hamlet parody you’ll ever want to see. This one is not to be missed.

Something Rotten is now playing at Marriott Theatre, 10 Marriott Drive, Lincolnshire through Oct 20. Check the website for specific dates, times, and tickets. Find more information about current plays in our front page recs and at theatreinchicago.com.