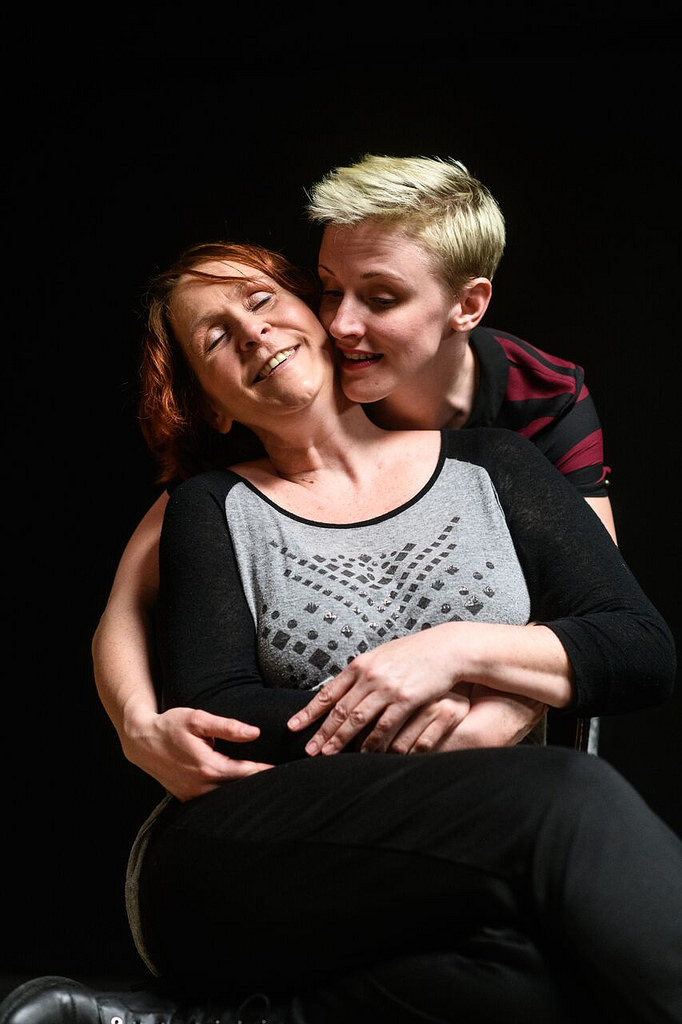 In The Days Are Shorter, Evanston native and playwright Corinne J. Kawecki examines the problems many of us have with aging in a sweet, simple diamond of a play that has heart in spades. That makes sense for a play that deals with love (of each other and of self), relationships, and card magic. (Please don’t call them ‘tricks.”) And it is a good match for Pride Films and Plays, though their smaller Buena Theatre is a bit challenged by the script.

Julia (Pat Parks) is having a bad week. Not only can’t she sleep (for seven days now dreams about falling have kept her awake), not only is her former lover / current landlady kicking her out, not only does her 25-year-old magician lover want to move to Vegas, but Julia is also hearing voices. We hear them as well, sometimes multiple overlapping voices and sometimes single ones, telling her to get up or questioning her motives for whatever she might be doing. It would be very easy to put this down as hallucinations due to sleeplessness, but the voices seem at times to know more than Julia does. Parks is wonderful as this hapless woman, trying to muddle through her life (such as it currently is) but finding it more and more difficult to stay focused. Her mannerisms, her voice, the laconic way that she deals with everything, are perfect for depicting a nice person made edgy by lack of sleep. Her current lover, the younger woman named Treat (Kendra Verhage) who wishes to move to Vegas, is trying to teach herself to be a card magician. She is constantly shuffling, flipping, or dealing cards and asking people to “pick a card, any card.” Julia’s denigration of such tricks as illusions and “deception” do nothing to thwart her desire; Treat is all about her dream for her future.  Verhage plays her as as sweet and open as possible. (The voices call her “adorable.”) Even when she tells Julia some darker secrets, she somehow still comes across as innocent. Julia’s former love, Pax (Gay Glenn), is a role that mostly calls for her to be exasperated by Julia’s new romantic affair, but Glenn is careful to let us see the broken love in the background. The fourth character in this little club (you knew I’d get “clubs” in here somewhere, didn’t you?) is a 76-year-old woman named Ada (Joan McGrath) who hires Julia through an escort service (just escorts, Julia is quick to note). Ada becomes an unlikely recurring character because something in the conversation Julia had with her strikes a chord with the younger woman. Ada is unabashedly 76, proud to be that old and continuing to look to the future, the exact opposite of Julia, who at 53 tells people she is 49 and believes that being comfortable with your age is impossible. These four (and the voices, of course), explore the different ways people deal with their own aging. Julia interprets her frequent nightmares about falling as heading to death, while her friends tend to interpret them as falling into life. They see the fall as the first step toward acceptance and encourage her to “jump” into it. Kawecki’s clever script brings this all together in a blend of card tricks, tree houses, and deception, and we gladly go along for the ride.

The main issues I had with this production were the sometimes interminable scene changes. The first one, especially, (driven by a costume change that Kawecki would be well advised to make easier if possible) lasts a lifetime. It’s hard to make complicated scene transitions in the tiny house at The Buena with its utter lack of backstage space, but director Iris Sowlat, who otherwise does a wonderful job with her cast and this whimsical script, needs to find ways to speed things up.

It is certainly true that, as we age, “the days are shorter,” but this play is a lovely, “adorable” exploration of why that should not matter. Aging, after all, is as much of a deception as a card trick or the shadows that Julia hides in. I asked my mother about it once, when she turned sixty.

Now that I’m sixty I know just what she meant. And this play does a beautiful job of illustrating the point.

The Days Are Shorter is a Pride Films and Plays production now playing at the Pride Arts Center,  4741 N Broadway, Chicago, until June 3. Performance times vary; check the website at Pride Films and Plays. Find more information about current plays on our Current Shows page and at theatreinchicago.com.