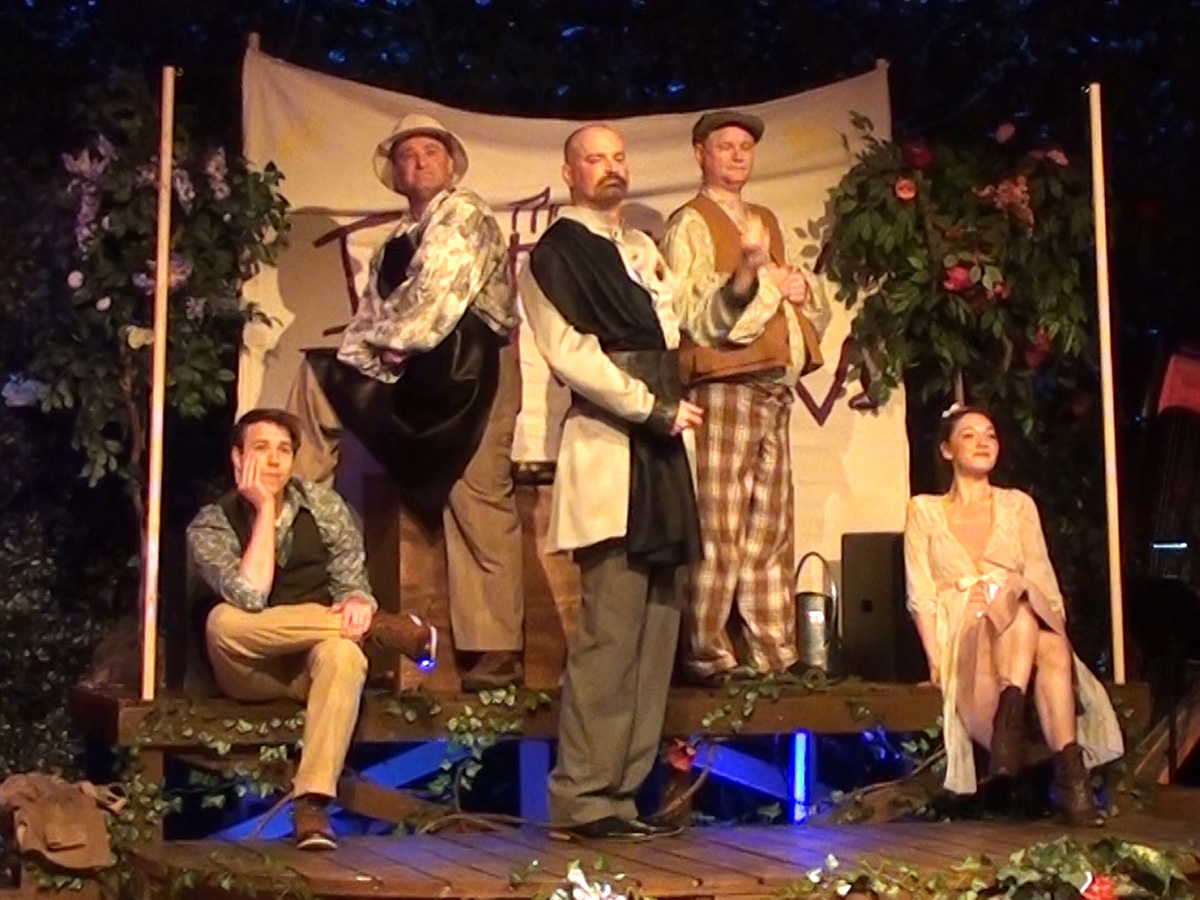 Nearly all plays present complications and problems in Act I and then resolve them in Act II.  Not so with The Fantasticks, though, where everything appears to be solved by intermission!

Oh, there are plenty of complications in the first act.  Problems include feuding neighbors and their children who are mutually attracted despite the family rifts – or perhaps because of them. However, all is easily and smoothly resolved in this opening act as the tale of true love between 16-year old Luisa (Jessica Surprenant) and 20-year-old Matt (Graham Todd) runs deliciously over any bumps towards a happy ending.

What next? During the break, we speculate on what could possibly follow and—equally important – how would it logically flow from Act I’s conclusion.

Moving from the shadows of romantic moonlight into the brilliance of sunshine provides a superb transition. What the night obscures, the daylight reveals—with all its flaws and freckles! Illusions are shattered. As the set brightens, the story darkens.  The couple severs their ties and the Matt goes off – wildly optimistic – to seek worldly adventure.

The innocence and naivete of Act I moves into cynical reality in Act II – climaxed by a most brilliant song: I Can See It. In alternating, contrasting  lyrics young, enthusiastic Matt and jaded, world-wise El Gallo consider the future:

What is most haunting is Matt’s prophetic refrain: I CAN LEARN!

All the characters learn – the hard way – through painful experiences, so that in the final resolution, the romance is built on a solid base, not sand. What a tour de force unfolds through song, comedy, clever plotting and insight. Especially humorous are familiar lines from famous plays – often from Shakespeare and often butchered – which are woven into the dialogue.

In addition, there is one fascinating mute character played by Lily Jean, a performance artist, who moves the action along playing not only an inanimate wall that separates the two feuding families but also providing smooth stage props and setting changes effortlessly.

Kudos to Aaron Kaplan for musical direction, and the fine orchestra with Kaplan on cello, Talar Khosdeghian on piano, Michael Maganuco on harp and Leo Finan playing bass.

This musical, with words by Tom Jones and music by Harvey L. Schmidt,  originally ran off-Broadway for 42 years and 17,162 performances, an achievement that led to an entry in the Guinness Book of World Records. Now, you needn’t regret not attending during its amazing run. It is right here in Skokie and not to be missed!

The Fantasticks is now playing at the Skokie Theater, 7924 Lincoln Ave in Downtown Skokie. Check the website for specific dates, times, and tickets. Find more information about current plays in our front-page recs and at theatreinchicago.com.