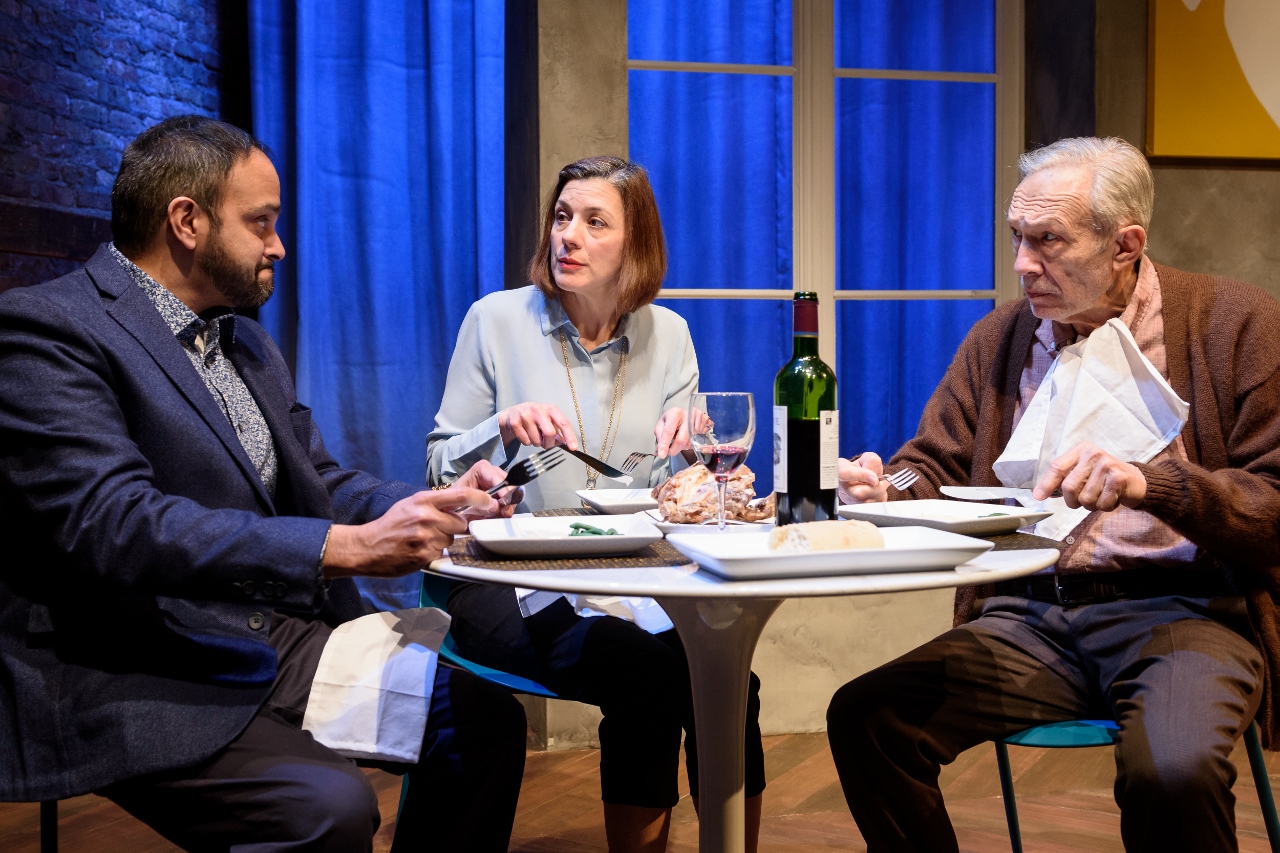 In an era when the very nature of the words “reality,” “truth,” and “fact” seems to change with the perception of the observer, it’s sometimes not all that easy to tell what is going on. Imagine how much more that must be the case when your mind is ravaged by a disease that makes your own memory untrustworthy. To show us, French playwright Florian Zeller (translated by Christopher Hampton) brings us The Father, a “new form of thriller”: one in which we are placed into the muddled and fragmented mind of a man with Alzheimer’s and shown how he perceives his world. It’s a unique and important play, and Remy Bumppo brings it to terrifying life at Theater Wit in an emotional, powerful, and realistic production.

To accomplish this, Zeller shows us a series of disjointed scenes, some of which replay moments we have already seen, others of which jump over several weeks or months. We see these scenes, for the most part, as they unfold in the confused mind of André (David Darlow), a man whose grip on reality is slipping drastically. He’s an unreliable focal point: it is never clear until the end how much of what we are seeing is real and how much is the product of his own jumbled thinking. We see his memories as he sees them, with moments that contradict each other and faces showing up that he can’t remember or recognize. It’s a terribly frightening nightmare he finds himself trapped in, the more so because he is wide awake.

Zeller’s technique, marvelously handled by director Kay Martinovich, is to immerse us so completely in André’s mind that we too are not clear about what is real and what is not. As memories blend with memories, neither he nor the audience is able to keep things straight. An early example: André finds a man in his apartment he does not know, a man who tells him that he is his son-in-law. Then his daughter comes home, but she too is unrecognizable. Shortly, the man is gone and his real daughter is back, but she doesn’t understand him when he tries to explain to her what he has experienced. It’s easy to understand why this would be alarming.

Anne (Linda Gillum) sees it as her duty to take care of her father, but it is getting more and more difficult. He rejects caregiver after caregiver until one arrives (Laura, played by Alys Dickerson) who reminds him of his missing younger daughter. With her, he feels he can get along, though he finds it annoying when she adopts a stereotypical “mothering” tone to get him to take his pills or get dressed…the only two activities that ever seem to be happening to him. Meanwhile, Anne’s husband, Pierre (Anish Jethmalani), is getting more and more frustrated with a life that revolves around a sometimes incoherent, sometimes cantankerous old man who refuses care. He wants Anne to put her dad into a nursing home, and she’s starting to see his point.

Darlow is brilliant as André, searching the discontinuous corridors of his memory to try to make sense of the life he is living when he does not have all of the pieces of the puzzle. His anguish and confusion are palpable, especially because, with the play’s structure, we don’t have all of the pieces either. The other two actors in the ensemble, Laura Resinger and Bobby Wilhelmson, slip in and out of André’s mind, taking the places of his daughter and her husband and creating much disorientation for the bewildered old man. He doesn’t know what to make of them any more than we do.

Gillum is strong as a woman at the end of her rope with a father she dearly loves whom she can no longer take care of. She’s especially powerful describing a nightmare she has in which she strangles him, putting him out of his own—and her—misery. Watching her father slip slowly away from her is awful, and Gillum perfectly conveys the deep and conflicting emotions of such cases.

Yu Shibagaki’s set, designed so that pieces of furniture and art can vanish between memories as André gets more and more confused, is lovely, especially as lit by Brandon Wardell. Christopher Kriz’s original music between scenes adds to the feeling of something happening that is out of control. Martinovich keeps the pace way up in most scenes, both to illustrate the turbulence of André’s point of view and to highlight the difference between those scenes and the ones in which it is just Anne and Pierre, when things are slow and quiet as they contemplate what to do with him.

Alzheimer’s is an insidious disease. It steals dignity as it steals memory, leaving the patient a shell of his past self. Most plays that deal with it focus on the pain it brings to the caregivers, who have to watch their loved ones lose any sense of who they once were. The Father, though it does do that, also is able to allow us into the way that the sufferer views the world. As we watch André dissolve from the man he knows he was into little more than a child, Darlow brings home the sheer terror of being in that situation. And as Zeller’s inventive script invites us into that experience, we are given a glimpse of what the future might hold either for ourselves or for those we love. It is a remarkable accomplishment, and one of the most important plays you’ll ever see.

The Father is a Remy Bumppo production now playing at the Theater Wit, 1229 W Belmont, until Mar 9. Check the website for specific dates, times, and tickets. Find more information about current plays in our front page recs and at theatreinchicago.com.