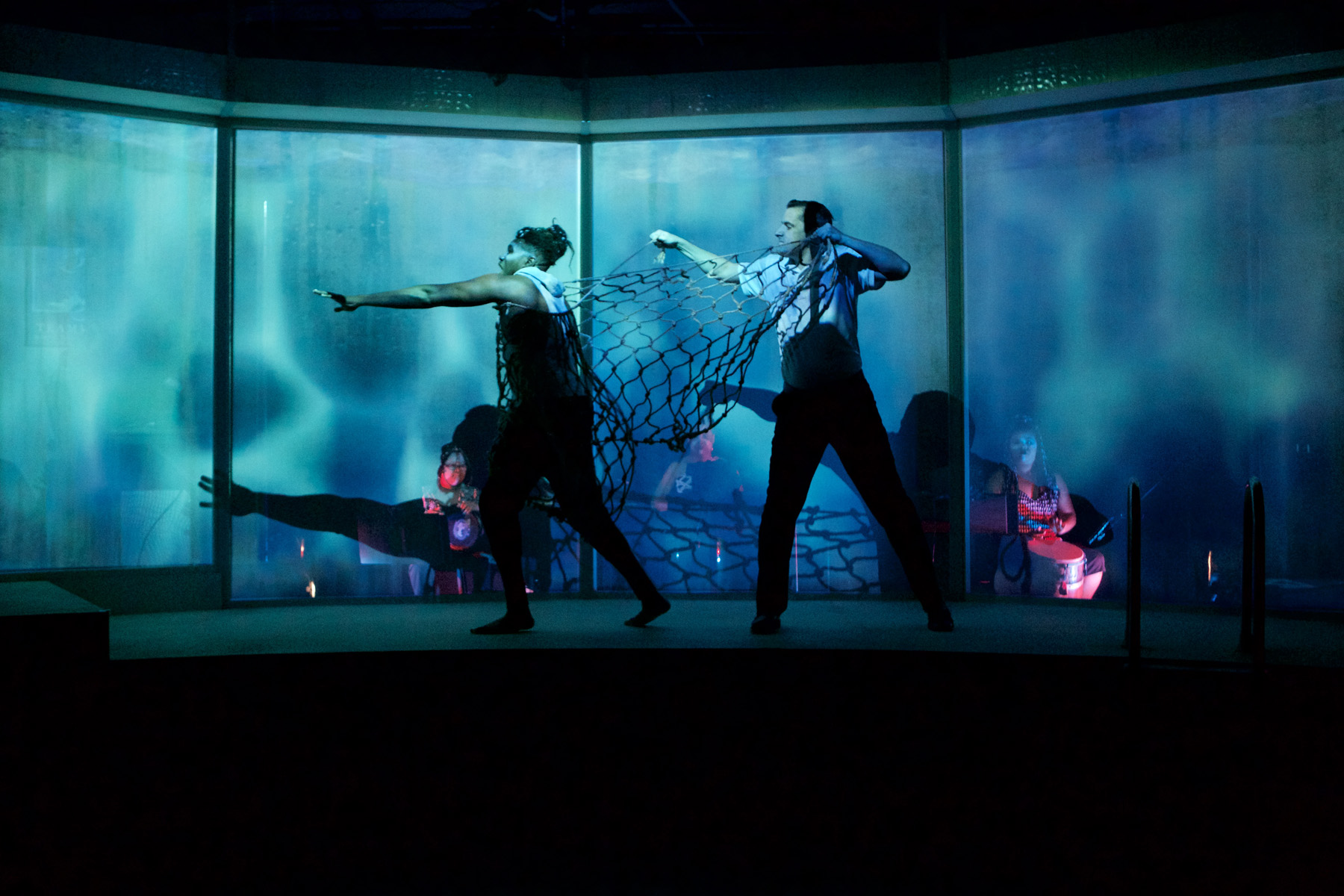 Before we get started, there are a couple things we need to be clear on. First, Tilikum is not a play about whales. We should get that straight right away. Yes, the play is named for Tilikum, the killer whale who killed his trainer, Dawn Brancheau, and two other people during his 34 years in captivity. Yes, some of the actors play whales, including Greg Geffrard, who is mesmerizing in the title role as Tilikum. And, yes, the play is set in what appears to be a low-rent version of SeaWorld. But, in a play so ground breaking, so utterly perfect for this moment in history, a play that dares to use symbolism as a blunt force instrument, smashing preconceived ideas about how we talk about Race in America, in a play that challenges us to wake up and recognize, as Colon writes in her “note from a playwright” that “slavery was never abolished” and “every day you’ve drawn breath in America, slavery has been legal, in the form of prisons,” in a play that puts you in an hour-and-a-half long dreamworld of modern mythology, replete with references to Native American myths and black history, while delivering line after line of crazy-good dialogue-poetry, then dance, and always music, a play set to a beat, where drums speak for whales, and whales speak for the victims of manipulation, exploitation, violence, and dehumanization–systematized, profitable, heartless, ruthless, soulless, brutal dehumanization–in a play that basically dares you to be the sort of person who’s so oblivious, so safe in a world of nauseating white privilege as to miss the 12,000 pound, jet black, killer-whale-sized, six ton bus of never-meant-to-be-subtle symbolism… it’s pretty important that you get that Tilikum is not a play about whales. The second thing that we need to be clear on is that Tilikum is not just good. It’s more than good. And it’s not just great. It’s more than great. For right now, for where we are right now, Tilikum is essential.

As Colon explains in her “note,” the inspiration for the play came from an epiphany she had a couple of weeks after her experience during a Black Lives Matter protest of the Assembly of Chiefs of Police in Chicago at McCormick Place in 2015. After stopping traffic near the entrance and strategically shutting down the area around the convention center, Colon watched as the police “dispassionately” went about the business of shutting the protest down, while angry drivers, furious about the inconvenience caused by the disturbance, lashed out at the protestors and “shoved young women protestors, and threatened to run us over.” She writes, “momentarily stalled drivers were not enraged at the glut of money this city was spending to swap tactics on how to more effectively mete out violence with impunity, they were enraged that young black folks in the street, singing and chanting for freedom, were making them late.” Colon juxtaposed this experience with a CNN film called Blackfish depicting a protest led by white suburbanites who were enraged by the treatment of killer whales at SeaWorld. “So I thought: cool, bet. White people love whales. Even if they black. I got some things up my sleeve.”

The result of Colon’s “bet” is not just innovative, it’s entirely new. Somehow, Tilikum deploys symbolism as a highly effective device–telling an allegorical story as dramatic, visual, lyrical, and sonic art–while also radiating palpable contempt that it has to use symbolism to make its point in the first place. It’s modern mythology that’s angry that it has to use myth. It’s as though the play grabs you by the shirt, points to the rattlesnake curled up on your doorstep, and asks, “Why do I have to show this to you?”

The considerable trick of pulling off this double backflip script in a production that, by the way, calls for actors to blend dialogue with instruments like the Conga, Barrile, and Doumbek, as digital whales swim across a thin translucent curtain separating the percussionists from the actors, is executed flawlessly by Lil-Anne Brown. Brown deftly syncs the stellar performances given by Gregg Geffrard (Tilikum), Sigrid Sutter (Dawn), and Matt Fletcher (Owner), with Victoria Deiorio’s captivating sound design, and Paul Deziel’s projection design. In an effort to bring to life a set that lives up to a multi-layered script that doesn’t shy away from juxtaposition, William Bole’s subtle yet effective institutional, prison-like, half swimming pool, backed by a pool deck and claustrophobic phone booth office on one side and three musicians in beautiful, vibrant, flowing traditional African clothing on the other, hits the nail on the head.

All of these elements combine to form a production that feels much larger than the three characters with spoken dialogue, but each of these three performances stands out in its own way. The role of Tilikum, king of the sea, gives Geffrard the perfect opportunity to show off his considerable energy and range. Geffrard’s performance runs an acting gauntlet from ecstatic to tragic, dominant to utterly powerless, frenetic to trapped. His tour de force non-stop hour-and-a-half long performance is a beautiful, heartbreaking whale show in a tiny little pool. Sigrid Sutter is every bit as compelling in her role as Dawn, the charmingly chipper, over-eager whale trainer whose affection for Tilikum goes a bit too deep. Sutter masterfully demonstrates the profound complexity of a whale trainer trapped in her own tank, well-aware of the brutality of Tilikum’s incarceration, and no stranger to gender-based dehumanization. Yet, the strength of Sutter’s performance comes in her ability to convey that, despite all of her good intentions, Dawn is sunk deep in her own subtle brand of exploitation: while she’s sympathetic to Tilikum’s suffering, Dawn is also oddly addicted to it. In addition to Geffrard and Sutter’s extraordinary performances, Matt Fletcher is not to be missed. Fletcher’s Owner drips with white privilege and gleeful exploitation. At times angry, often frustrated, always utterly devoid of empathy, Owner systematically removes the humanity from everything in his path–women are sex objects, people are customers, whales are commodities–but what makes Fletcher’s performance truly special is his uncanny ability to convey Owner’s absolute belief that, in all situations, no matter what the circumstances may be, he is the real victim.

There is a certain brilliance to Kristiana Rae Colon’s Tilikum. If it was just a play about whales, it would be a very good play about whales. If it was just a play about Race, it would be a very good play about Race. But Tilikum is more than that. According to the New York Times, in 2015, the phrase “We need to have a national conversation about Race” appeared more than 600 times in media coverage. The phrase was ubiquitous, and we can see how well it went. But how can we talk about Race when we don’t speak the same language? The recognition of this paradox is the brilliance of Colon’s play. Tilikum is the king of the whales, but he can’t speak to the four female whales in his own tank. Dawn is beautiful and filled with hope, but she is married to Tilikum’s pain and can never really know the depths of his anger. And the Owner can’t really ever know anyone because he can never see beyond his own perceived victimhood and the all-important bottom line. Colon’s point? To be willing to talk about Race, we first need to be willing to care. Even when it’s uncomfortable… or it makes us late. At the end of the day, Colon’s Tilikum, born of her frustration with those who refused to take the time to understand her truth, is a difficult play to watch, but it’s essential.

Tilikum is a Sideshow Theatre Company production now playing at the Richard Christiansen Theatre at Victory Gardens, 2433 N Lincoln Avenue until July 29. Performance times may vary; check the website at sideshowtheatre.org/tilikum. Find more information about current plays on our Current Shows page and at theatreinchicago.com.