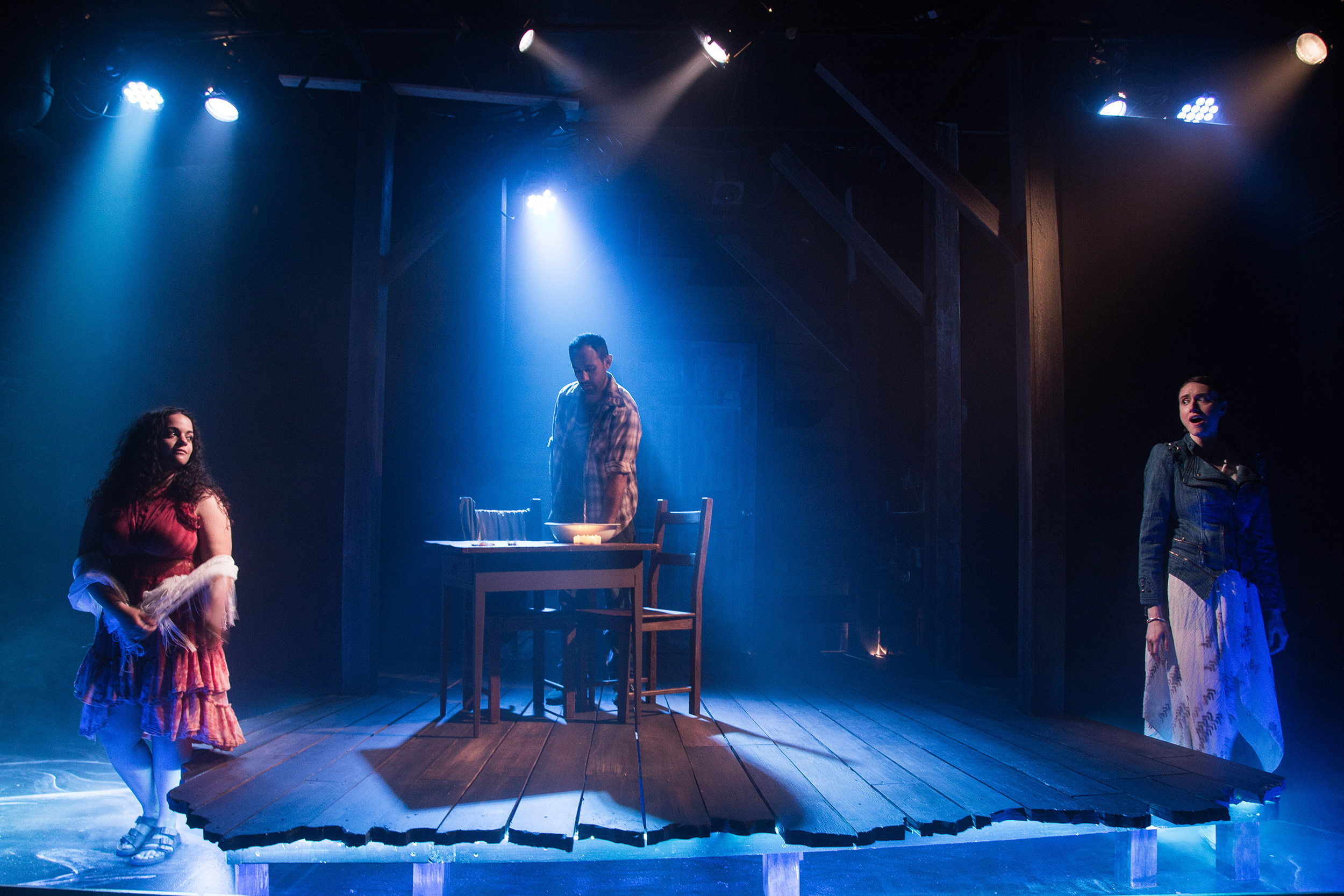 It’s both simple and impossible to state exactly what The River is all about. The short, enigmatic 2012 play by Jez Butterworth (whose The Ferryman just won the Tony Award) is, at least on its surface, about a man who takes his girlfriend (girlfriends?) fly fishing on the one moonless night in August each year when the sea trout are running. However, like fishing itself, The River is all about deception and illusion, and Butterworth’s at times over the top poetic language (along with the inclusion of poems by other authors in the script) practically demands that we look at the whole thing as a metaphor.

Joe Lino plays the Man, a fishing enthusiast who waxes lyrical on several occasions about what fishing means to him and about the powerful experience of catching his first fish at seven years old. It is the night of the late summer new moon. Butterworth has the Man utilize Ted Hughes’ poem “After Moonless Midnight” to entrance his new girlfriend, called, naturally, the Woman and played by Christina Gorman. The Woman, however, is interested in a different kind of poetry: the beauty of the sunset and the writing of Virginia Woolf. She does not seem much interested in fishing, no matter how enthrallingly the Man describes it. Still, when she leaves the stage after the first scene, it seems that she might go with him after all.

The second scene begins with the Man frantically calling the police because his girlfriend is missing. When she enters, though, it is not the Woman but the Other Woman (Chelsee Carter) who walks through the door. And Butterworth is off and running in a circular puzzle of a play, which sometimes seems to be a romance, sometimes a thriller, sometimes perhaps even a ghost story, but always fascinating and mysterious. We are never absolutely sure of what is happening as we watch the Man seek to lure in each woman in the same way. Are they in fact two women? Is a mysterious woman glimpsed by one of them while out walking a third? All we can know for sure is that the characters are freely lying to each other, especially the man, who professes that he has only ever taken one woman to his uncle’s cabin on the river…to two different women, both of whom find evidence that this is not true.

There is solid acting here from all three cast members, and Boho’s production of The River is true to the playwright’s language in all of its design aspects as well. Director Jerrell L. Henderson maintains a rich kind of enhanced melancholy throughout the play, aided nicely by Eric Luchen’s stark cabin that would not be out of place in any scary story you’ve ever heard, Kaili Story’s moody lighting, Eric Backus’s sound design, which ranges from realistic (crickets) to ominous in various scenes, and a ground fog that rolls in at specific moments.

It does not seem as if Butterworth really desired to bring clarity to his creation; rather, he wanted to write something with a darkly poetic feeling that invites the audience to try to unwrap its hidden treasures themselves. Is it a play about relationships? Is it a play about the deceptions lovers (and fishermen) use to achieve their goals? Is it meant to make us wonder about the Man’s true motivations? There are no easy answers, but if you enjoy thinking and debating about the play you’ve just seen, The River will reel you in and not let you go.

The River is a Boho Theatre production now playing at the Greenhouse, 2257 Lincoln Ave, Chicago through July 28. Check the website for specific dates, times, and tickets. Find more information about current plays in our front page recs and at theatreinchicago.com.