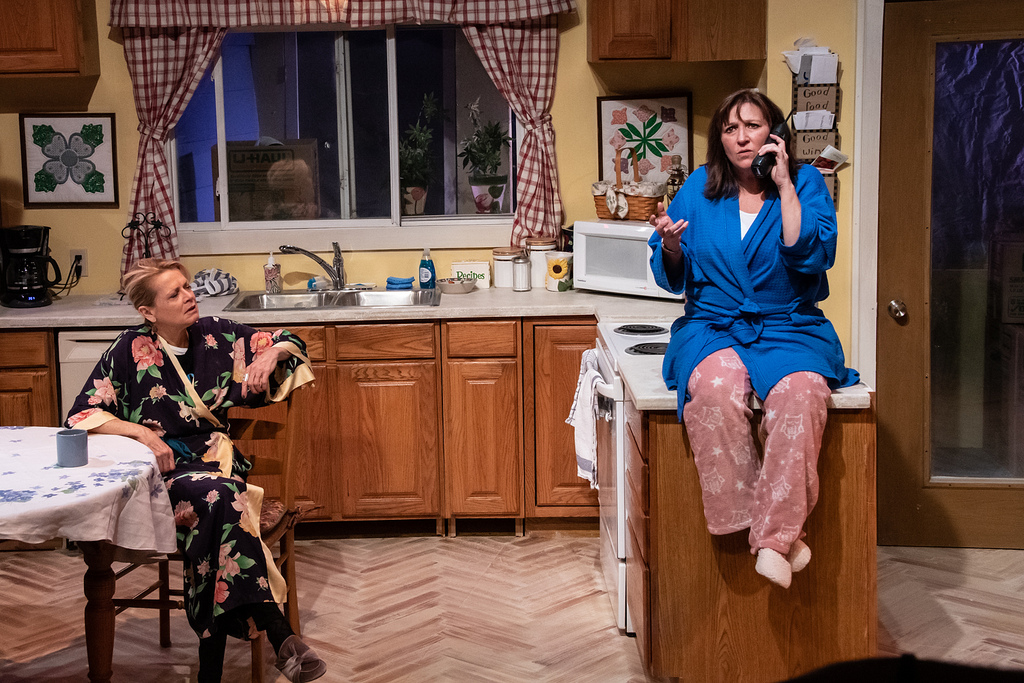 There are moments in our life when our identity is shaken. For years, decades even, we are labeled… “mother,” “wife,” “homemaker.” But suddenly, something snaps and those labels don’t seem to fit us anymore. Who are we? Casting off these labels and trying to rediscover ourselves is a crisis many of us can relate to. This crisis is where Sharon finds herself in Citadel Theatre’s production of The Roommate and why I found myself so easily drawn into her story.

The Roommate follows a few months in the relationship between Sharon (Ellen Phelps), a recently divorced Iowan housewife and mother of a distant, both emotionally and physically,  grown son and her new roommate Robin (Lauren Carter Rose), a New Yorker looking for a fresh start. Phelps’ Sharon has the necessary midwestern charm and naivete as she nosily tries to understand why Robin would seek refuge in a place so opposite from the Bronx as Robin desperately tries to hide her past in an attempt to create a new future. What I found so compelling in the story is that while both women seem to have lives and personalities completely opposite from one other, they both find themselves unsatisfied with who they are at this stage of midlife. Sharon ponders hot yoga and needs Robin’s help with online dating. Robin wants to quit smoking and give up the fast-paced lifestyle she left behind in New York.

This 90 minute production contains eleven scenes and only two actors- and no run crew. Phelps and Rose keep the audience engaged through all of this. Both actresses have incredible energy and create believable characters as well as a convincing relationship. I enjoyed watching the interplay between Sharon and Robin as they get to know one another and slowly let their guard down moving from roommates to business partners, to friends to maybe even something more. There are moments of laughter and tears as the audience can see their own lives often reflected in the lives of Sharon and Robin.

This production was enhanced by its thoughtful and detailed tech which helped to keep the story moving and the audience entranced. The entire play takes place in a very realistic looking Iowa kitchen and a front room designed by Eric Luchen. I marveled at the detail of the pictures, magnets and posters on the refrigerator, the spoon rest on the oven, even the numerous papers filed in the wall hanging next to the door. The subtlety of Marissa Geocaris’s beautiful lighting marks the passing of time between the 11 different scenes- cool blues fade out the evening scenes and warm reds bring up the morning ones. And the almost dance-like choreography of the set changes moves the story seamlessly from one moment to the next as Sharon gracefully puts the dishes of one scene into the dishwasher, goes up the stairs and reappears moments later in her pajamas and robe to start the coffee for the next morning scene. These transitions keep the flow of the play moving and make even the scene changes and the passing of time interesting.

Director Beth Wolf’s vision helps bring out the tragedy in all of us as we try to rediscover who we are. Sharon’s cry of agony as she realizes she must find herself now that she is alone after decades of only understanding herself through labels like “mother” and “wife” – labels that Robin so often talks about in disgust- strike a chord. Maybe it’s because I saw my own mother, also named Sharon, in this show as the character sighs, “I don’t know where to start…except over again.” Or maybe it was because I saw a bit of myself as I struggle to figure out who I am among a series of my own set of labels. In any case, I once again found myself moved by a Citadel Theatre production. The Roommate is for all of us who want to know who were are, even if that means starting over…again.

The Roommate is now playing at the Citadel Theatre, 300 S. Waukegan Road, Lake Forest, through March 3rd. Performance times vary; check the website at Citadel Theatre. Find more information about current plays on our Current Shows page and at theatreinchicago.com.