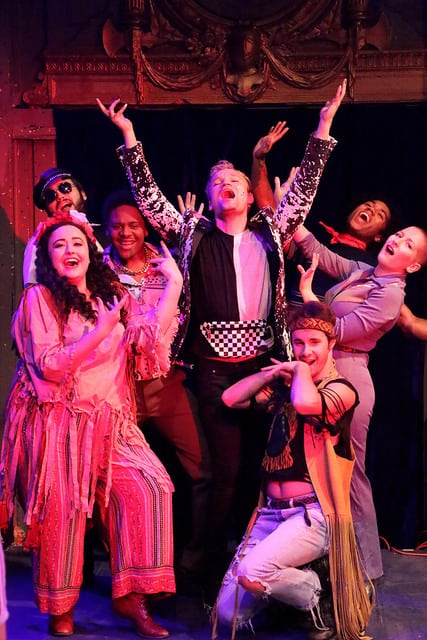 For the second time this season, a musical about the disastrous fire 45 years ago that killed 32 people in New Orleans’ Upstairs lounge is playing in the Broadway Theatre of Pride Arts Center. It may seem an unusual topic for a musical but, as The View Upstairs once again shows, it is a highly emotional story rife with pain, love, foreboding, even humor: a poignant story we should not forget about the human beings lost in the horror of the fire.

While Upstairs the Musical focused entirely on the imagined events of the night of the fire itself, taking us into the lost lives as well as a couple of survivors, The View Upstairs, which premiered off-Broadway last year, takes a different approach. Kevin Webb, who reminded me of Neil Patrick Harris both physically and through his honest and emotionally varied performance, plays Wes, a young fashion designer from modern day New York who buys the building containing what was the gay bar and finds himself immersed in a haunting evening mingling with the spirits of the dead. As he slips deeper into the fantasy, the self-centered fashionista learns of love and life from these ghosts of the past as he relives their final night with them.

Among the spirits of the bar: the funny and outspoken bartender, Henrietta (Caitlin Jackson), a proud butch lesbian whose friendly and outgoing demeanor doesn’t even try to mask the fact that she takes no guff from anyone; Patrick (Averis I. Anderson), a hustler with whom Wes falls in love; Buddy (Jeff Bouthiette), the bar’s piano player and a closeted gay man; Willie (Frederick Harris), a self-styled old queen who doubles as the bar’s resident philosopher and matchmaker; the young drag queen Freddy (Rebén Meléndéz Ortiz) and his mother Inez (Selene Perez); Richard (Robert Quintanilla), the pastor of an MCC church who was holding a service in the bar that night; and Dale (Eric Lindahl), the man who the play suggests committed the arson. (No one knows who actually did it, but the man on whom this character was based was a prime suspect; he committed suicide a year later.) In addition to these actors, all of whom give outstanding performances, a strong ensemble made up of Matt Frye, Jennifer Ledesma, Ben F. Locke, Cari Meixner, Juwon Tyrel Perry and Roy Samra tell their own stories without any dialogue. Samra especially is wonderfully sweet as a young man infatuated with another bar patron. Credit to director Derek Van Barham for not missing an opportunity to have silent players react to moments; several of these reactions elicit laughter from the audience even though the players are not in focus at the time. It adds another layer of verisimilitude to the scene which is fundamentally surreal, allowing us to enter the magical portal with Wes and experience what he does.

The blending of past and present allows author Max Vernon to comment on modern events such as Pulse and the election of Donald Trump and Mike Pence (mentioned as a VP who believes in conversion therapy, signs that there is a lot of work to do despite the gains that gay people have made in the last four and a half decades. (One lyric points out that gay marriage is now legal, “but in four years who can say.”) Vernon’s story, with its themes of acceptance and self-reflection, is timeless, though his songs, which play well in the show, are not particularly memorable. The musical ensemble conducted by Justin Harner is outstanding, though. Costumer Chris Tuttle takes us back to 1973 with some wonderfully evocative outfits, and choreographer Jon Martinez has created some lovely, energetic dance movements that play well in the Broadway’s close-to-the-audience space.

Speaking of the space, designer Jimmy Jagos has filled it with enough early 70s memorabilia, some glorious (a Janis Joplin concert poster), some tacky (naked Burt Reynolds), to fully invoke the atmosphere. And lighting designer G. “Max” Maxin IV knows how to highlight moments beautifully. It’s a fun play to watch. And the theatre itself, a former speakeasy, adds to the ambience. This is a perfect show for Pride month and a powerful reminder to us all, no matter what month it is, to treat each other with respect. You may not exit the theatre humming the songs, but you will be moved by the play and maybe even take the time to google the Upstairs Lounge and read about what happened there. Vernon allows the dead to speak for themselves and we, like Wes, need to listen.